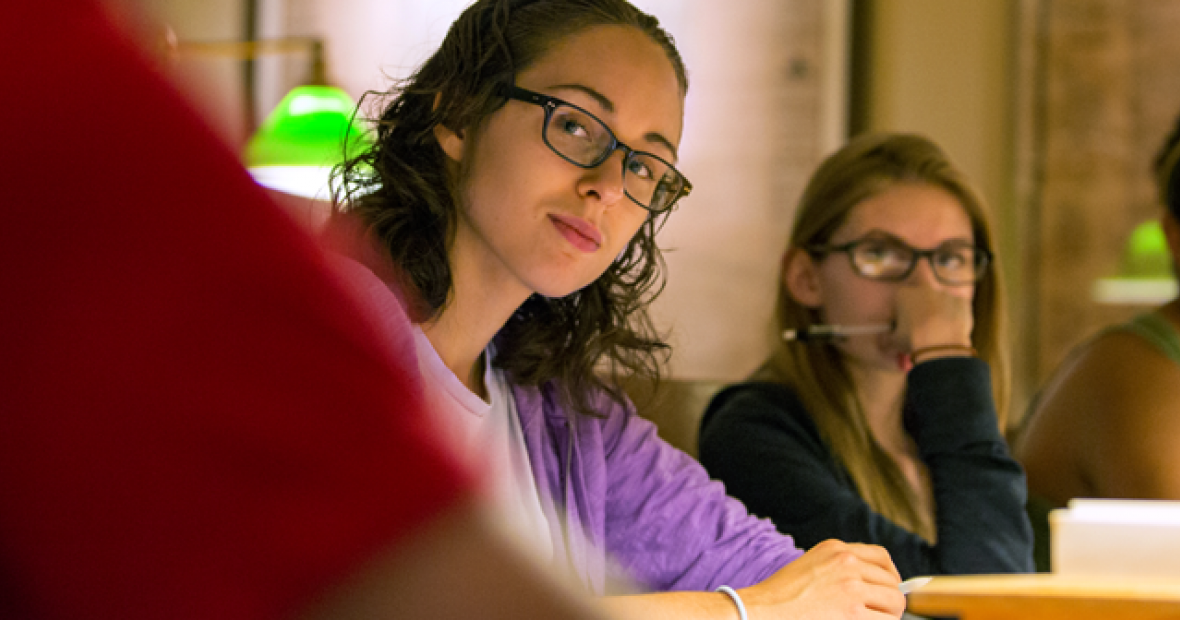 Grinnell’s First-Year Tutorial is the one class you’ll have in common with every other first-year student. It’s a small seminar class, usually limited to 12 students, and the only course required for all majors in Grinnell’s individually advised curriculum.

The First-Year Tutorial comes in many academic flavors. Here’s a taste for fall 2014:

Nearly three dozen different topics, which vary from year to year, are offered each fall. Entering students choose their top five. Then the College assigns them to a class.

What do you learn in the tutorial?

While course content varies considerably, each tutorial focuses on these skills: college-level writing, critical reading, and college-level oral communication. The tutorial will introduce you to a college librarian, library resources, and the college’s academic honesty policy and practices.

“The tutorial is the first increment in a life-long process of learning to write,” says Jerry Lalonde, professor emeritus of classics. He adds, “It allows the teaching of writing in an intense way.”

Lalonde has taught the tutorial many times, beginning in 1970, the first year it was offered, because he enjoys being part of new students’ transition to college. In fall 2014 he will teach Humanities I: The Ancient Greek World. 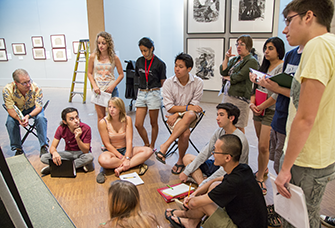 Because he knows you and other students have a wide range of abilities, Lalonde grades partially on improvement. “A first draft should be the best they can do at the time. A second draft will be done after feedback and possibly a conference,” he says.

Eliza Willis, professor of political science, asks students to rewrite, submit new drafts, and to seek advice from other students to improve writing. “I’ve started doing a lot more peer reviews,” she says. “I think that’s very effective both as instruction you get from other people, and also from learning about your own writing.”

In fall 2013, Willis taught a tutorial called Making a Difference in the Fight Against Global Poverty. “I have students write a grant application. I think it’s a really good skill to develop,” Willis says. “Students have told me they use that persuasive writing skill right away.”

While students write plenty in the course, they also work on public speaking skills.

Willis teaches “how to enter a discussion, how to act towards other people in a group, the proper way to interact. For example, saying ‘I’d like to comment on this particular point’ or ‘I’d like to change the subject’ — I emphasize those skills a lot.”

Lalonde appreciates intelligent and disciplined discussion of subject matter. He recently introduced an assignment he calls “civilized conversation” that prevents students from saying “like” over and over, for example.

How do you choose a tutorial?

Willis suggests choosing something you don’t know much about rather than something you know a lot about. “Be open-minded,” she says.

Jenny Anger, associate professor of art history, agrees. “Follow your gut,” she says. “If something appeals to you, try it.”

Zaw Bo ’17, an international student from Myanmar, says, “Definitely choose a topic you’re interested in, because that’s what you’ll be talking about for four months.” He was drawn to Willis’s tutorial on global poverty because he’s interested in the topic. Bo adds, “I would have been happy with any other choice.”

Overall, it’s what you bring to the course — your enthusiasm, your interest, your willingness to learn — that makes a huge difference in your experience.

Lalonde says, “The tutorial’s greatest virtue is that it gives advisers and advisees a close relationship.”