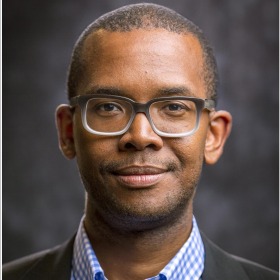 Vance Byrd is a scholar of nineteenth-century German literature who investigates how literary and print culture intersect with the history of visual media. He has published on topics related to the history of books and periodicals, critical race theory, museum studies, environmental humanities, commemoration, and graphic novels.

Byrd has been awarded prestigious fellowships to support his interdisciplinary scholarship in 2021–2022. He will participate in the National Endowment for the Humanities Summer Institute on Visual Culture of the American Civil War and will be in residence at Duke University for the academic year as a Humanities Unbounded Fellow.

In 2019–2021, he was awarded a New Directions Fellowship from the Andrew W. Mellon Foundation. This grant gives highly accomplished faculty members in the humanities and humanistic social sciences resources to conduct interdisciplinary research on the problems that interest them most. He has enrolled in the graduate program in Art History at Northwestern University, which has strengths in theoretical approaches to global black art, Performance Studies, and object-based art historical methods. He will use this specialized training to write a second book on the origins of global commemorative culture and its relationship to the contested histories of nationalism and racism since the 19th century. His further professional development has been supported by grants from the Classics Foundation Weimar, the Quadrangle Historical Research Foundation, and participated in a Fulbright Commission Seminar for American Faculty in German Studies. He is very grateful for the generous support the Frank and Roberta Furbush Scholar funds have offered, as well as the continued support provided by the Dean’s Office and the CSFS.

In his first monograph, A Pedagogy of Observation: Nineteenth-Century Panoramas, German Literature, and Reading Culture, Byrd investigates how print culture captures how Germans took cues from their observations and interpretation of space at panorama shows to develop new ways to organize and produce knowledge. He demonstrates how Germans entered an experiential realm through the immersive act of reading about panoramas in broadsides, fashion journals, newspapers, travel guidebooks, and in novels and short stories. Reading about panoramas fostered critical engagement with modern life in the early nineteenth century well before modernity could be experienced in full force in Central Europe.

In addition to numerous articles and book chapters, Byrd has published a co-edited book titled Market Strategies and German Literature in the Long Nineteenth Century with Ervin Malakaj (University of British Columbia) and a special journal issue with Sean Franzel (University of Missouri-Columbia) that addresses what it means to encounter canonical German literature in their original publication venue in newspapers and magazines rather than in book form. Byrd is also the co-editor of a journal issue with Matthew H. Birkhold (The Ohio State University) that examines how knowledge about the environment was generated, transmitted, and represented in nineteenth-century German literature. A co-edited volume titled Before Photography: German Visual Culture in the Nineteenth Century with Kirsten Belgum (University of Texas at Austin) and John Benjamin (West Point) is forthcoming. Finally, he is currently preparing a co-edited volume Queer Print Cultures with Javier Samper Vendrell (Grinnell College).

As a teacher, Byrd has served his students and the College with great distinction. In addition to being a passionate teacher of German language, literatures, and cultures, he has directed and co-directed Mentored Advanced Projects on topics such as Orientalism in German Literature; Translation and Belonging; Digital Amanas; and Euro-Africana Studies. Byrd has taken students to conduct archival research in Germany. Most recently, he taught an interdisciplinary course with Jeremy Chen (Studio Art) on print history and print making.

At Grinnell College, Byrd has served on Executive Council, as Chair of the Humanities Division, as Interim Director of the Center for the Humanities, as Co-Chair of the Faculty and Staff of Color Caucus, and as a representative to the ACM Minority Concerns Committee. Vance Byrd provides distinguished service to the profession. He has been the President of the Iowa Chapter of the American Association of Teachers of German. Most recently, Byrd was appointed to the Executive Committee of the Association of Departments of Foreign Languages (ADFL), a part of the Modern Language Association that advocates for language, literature, and cultural studies communities in the United States and Canada. He was elected to the Executive Committee of the Board of Directors of the American Friends of the German Literature Archive in Marbach, one of the most important institutions for conducting source criticism on German literary and intellectual history from 1750 until today. He has also been elected as Director-at-Large of the Goethe Society of North America and to the Modern Language Association’s Executive Committee on Languages, Literatures, and Cultures, as well as to this organization’s Delegate Assembly. Byrd was appointed to the German Studies Association Conference Program Committee and served on the selection committee of the German Academic Exchange Service (DAAD) and German Studies Association Book Prize, as well as the Goethe Society of North America Essay Award. He was a member of the National Endowment for the Humanities Global Book Histories Initiative Fellowship selection committee, which helped support non-western and immigrant book history and bibliography as well as people from underrepresented groups who want to attend Rare Book School.

The Studied Environment, a special theme issue of The Germanic Review: Literature, Culture, Theory 94, no. 3 (2019), co-edited with Matthew H. Birkhold, with essays by the editors, Anna-Lisa Baumeister, and May Mergenthaler.

"Enacting the Past: Nineteenth-Century Illustrated Periodicals and Painted Panoramas," in Before Photography: German Visual Culture in the Nineteenth Century (Berlin: De Gruyter, 2021), 65–93.

"The Production of Books and the Production of the Professional Self: Droste-Hülshoff's Predicament of Authorship," in Market Strategies and German Literature in the Long Nineteenth Century (Berlin: De Gruyter, 2020), 219–243.

"Saving the Forest: The Serialization of Wood Specimen Collections," in The Studied Environment, a special theme issue of The Germanic Review: Literature, Culture, Theory 94, no. 3 (2019): 228–238.

“Two Penn Graduates Have Been Elected to the Board of the American Friends of Marbach,” University of Pennsylvania website, September 2019. “This election highlights the academic achievements of Vance [Byrd] and Matt [Handelman], but also Penn's strong tradition in German studies, and its engagement with the education in archival work and the History of Material Texts.”

"German Department Rebrands as German Studies, Changes Scope," Scarlet & Black, April 25, 2019. “'[…] we’re not so sure about the nation-state, we’re acknowledging that people are always moving, that people don’t have equal resources, but people have a variety of modes of expression, and that we’re resisting a highly hierarchical, kind of canonical thing. … It’s raising of awareness and saying that postcolonial, transnational, global, different perspectives like black German studies, Asian German studies, all of these things are part of who we are, and it reflects our scholarship, our training, our teaching, but importantly, student interests,' said Byrd."

"Students, Faculty Push for Jewish Studies at Grinnell," Scarlet & Black, April 12, 2019. "Vance Byrd, German, said, 'It was really this academic year after Pittsburgh, where students and some faculty and staff started asking more active questions about what is the place of Jewish studies within the academic program of Grinnell, what is the history, like why don’t we have it, and what are the possibilities of introducing programming. … I think there is more of an awareness of the absence that was maybe exacerbated by the absence of a rabbi on campus.'"

"Professors Byrd, Tracy, and Lussier Receive Research Grants," Scarlet & Black, April 4, 2019. "Associate Professor Vance Byrd, German, is the first person at Grinnell College to ever receive the New Mellon Directions Fellowship. This grant, $298,000 in total, is the largest grant that an individual faculty member in the humanities and social studies has received in the history of the College. […]  With the New Mellon Directions Fellowship, Byrd will spend the next year studying at Northwestern University, taking courses in Art History, African American studies, and Civil War History. The grant will pay for his salary during that year and his tuition at the university, as well as fund his experiential learning and research for the two summers in between. […] 'The wonderful thing about the Mellon New Directions Fellowship is it’s not about the product, it’s about the process,” said Byrd. “It’s about my process of learning over eighteen months, and when I return, my teaching and scholarship should be even more interdisciplinary than it was before.'"

"Intermediale Selbstthematisierung," Institute for Contemporary German Studies at Cornell University, November 2, 2018. "[…] While acknowledging the panorama’s important role in provoking reflection about social and historical subjects, Byrd stressed that this very function can be problematic, since the perspective a panorama lends to historical knowledge always remains simplified rather than differentiated. Many questions following Byrd’s short presentation revolved around the forms that productive spectatorship can take in this inter-medial context, as well as how one is to appraise the relation between different kinds of media."