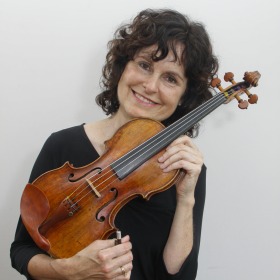 Violinist Nancy McFarland Gaub has had a varied career as soloist, recitalist, chamber player, and orchestral musician on three continents. She is a Lecturer in Music at Grinnell College, where she  frequently performs recitals and chamber music, teaches violin and directs the chamber music program. The Grinnell Chamber Ensembles has flourished, and recently performed in Prague at the Dvorak Museum.

Along with her husband, pianist Eugene Gaub, Ms. McFarland  Gaub is Artistic Director of the critically acclaimed Roycroft Chamber Music Festival, which they founded in East Aurora, NY, in 1994.Then  a member of the first violin section of the Buffalo Philharmonic Orchestra, she was a frequent soloist with the BPO and other orchestras, including a live radio broadcast of Saint-Saens’ Concerto No. 3, under conductor Aije Oue. The Buffalo News called her later performance of the Tchaikovsky concerto “… the highlight of the evening”, and her Vivaldi “St. Anthone” Concerto, “superb”.

Ms. McFarland Gaub enjoys working with composers and playing new music. With Red Cedar Chamber Music, she recently recorded (on Naxos and the Fleur de Lis labels ) the world premiere of Harvey Sollberger’s chamber work, “Perhaps Gilead”, to wide acclaim.. She also has performed with folk, jazz and pop artists from the Chieftains to Judy Collins to Natalie Cole, and has recorded with the Cousin John Band. She has performed at the Aspen, Spoleto (Italy), Chautauqua, Stowe (VT), Adirondack, Grant Park Symphony, Eastern Music Festival, Grand Teton Music Festival and the Festival de Invierno in San Miguel de Allende, Mexico. She has also performed as soloist and recitalist on radio and television broadcasts..

Originally from the Chicago area, Ms. McFarland Gaub received degrees from Chicago College of Performing Arts of Roosevelt University, and the Juilliard School, where she was a scholarship student of Dorothy DeLay. Her violin was made by Giovanni Grancino in 1695.

Ms. Gaub also enjoys running, hiking and reading. The Gaubs have one son, Will, who is a psychology major at Grinnell College.