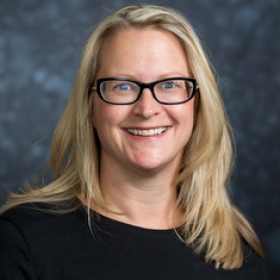 Astrid Henry teaches a wide variety of courses in Grinnell’s Gender, Women’s, and Sexuality Studies (GWSS) Program, including Introduction to GWSS (GWS 111), Theory and Methodology in GWSS (GWS 249), and the Senior Seminar in GWSS (GWS 495), as well as Foundations of LGBTQ Studies (GWS 211) and Feminist Memoirs (ENG/GWS 331). She has taught First-Year Tutorials on “Fame! A Cultural History of Celebrity” and “Stuff: The Meaning of Possessions.”

Professor Henry is the author of Feminism Unfinished: A Short, Surprising History of American Women’s Movements (W.W. Norton, 2014), a book co-written with historians Dorothy Sue Cobble and Linda Gordon. Feminism Unfinished provides a concise yet broad history of American women’s movements over the nearly one hundred years since women gained the right to vote, challenging many popular understandings of and myths about the women’s movement. In her chapter of Feminism Unfinished, “From a Mindset to a Movement: Feminism since 1990,” Professor Henry examines the generation of feminist activists who grew up taking for granted the opportunities newly opened for women. Using new technologies, like social media, to advance a decentralized and wired feminism, they responded to the United States’ increasingly diverse population, widening economic inequality, and women’s activism around the globe. An excerpt from Henry’s chapter was recently published on Salon.

Professor Henry’s first book, Not My Mother’s Sister: Generational Conflict and Third-Wave Feminism (Indiana University Press, 2004), analyzes U.S. feminism since 1990 and provides a theoretical framework for understanding contemporary generational conflicts as they have developed between feminism’s third and second waves over the last two decades.  Not My Mother’s Sister’s chapters address: the emergence of feminism’s third wave in the 1990s and its critique of second-wave feminism; the generational relationship between feminism’s second and first waves; the role of sexuality in the third wave’s assertion of generational difference; queer feminism and its relationship to 1970s lesbian feminism; and the central role of feminists of color, particularly black feminists, in the development of third-wave feminism.  Excerpts from Not My Mother's Sister have been reprinted in The Women's Movement Today: an Encyclopedia of Third-Wave Feminism (2006), Gender Inequality: Feminist Theories and Politics (2005; 2010), and the Chronicle of Higher Education (2004).

Professor Henry's articles on third-wave feminism and generational relationships within U.S. feminism appear in the journals Women's Studies Quarterly and PMLA, as well as in the anthologies And Finally We Meet: Intersections and Intersectionality Among Feminist Activists, Academics and Students (2012), Different Wavelengths: Studies of the Contemporary Women’s Movement (2005), Reading “Sex and the City” (2003), Catching a Wave: Reclaiming Feminism for the 21st Century (2003), and Mothers and Daughters: Connection, Empowerment and Transformation (2000).   Her most recent publications include “Fashioning a Feminist Style, Or, How I Learned to Dress from Reading Feminist Theory,” published in Fashion Talks: Undressing the Power of Style (SUNY Press, 2012), and the essay “Waves” in Rethinking Women’s and Gender Studies (Routledge, 2012), an anthology which explores the field’s foundational assumptions and provides critical genealogies of key terms within Women’s and Gender Studies.  You can read her interview with Rethinking Women’s and Gender Studies’s co-editor Catherine Orr at the book’s blog. Her essay “Fittstim Feminists and Third-Wave Feminists: A Shared Identity between Scandinavia and the U.S.?,” in Feminist Studies, provides a transnational, comparative analysis of feminism since 1990 using original translations of writing published in Danish, Norwegian, and Swedish.

Professor Henry received her Ph.D. from the interdisciplinary Modern Studies Concentration of the University of Wisconsin-Milwaukee's English Department. She received an M.A. from the New School for Social Research and a B.A. from Sarah Lawrence College. From 2006-2012, Henry served on the Governing Council of the National Women’s Studies Association, holding the position of Secretary of the Association from 2009-2012.

Professor Henry is currently on medical leave from the College.