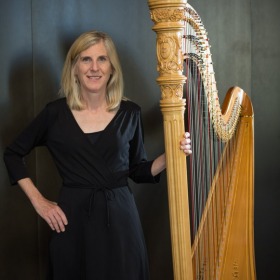 Harpist Kristin Maahs performs with Des Moines Metro Opera, Des Moines Symphony, Ames Children's Choirs, and Mason City's Una Vocis Choir. In 2003 she was invited to perform with the Irish Band the Chieftains at their concert in Des Moines, as a memorial to the band's harper Derek Bell. Kristin was a soloist with the Des Moines Community Orchestra in 2011, performing Celtic Concerto by Laura Zaerr. In collaboration with composer Ben Alaway, Kristin was featured on the celtic harp on the premier recording of his "Celtic Mass" which was broadcast on Iowa Public Television in the spring of 2012.

Kristin is half of the celtic harp duo Aran Daughters along with Barbara Evenson. Barb and Kristin play traditional tunes and sing songs in Irish Gaelic. The Aran Daughters have been performing at the Iowa, LaCrosse, and the Milwaukee Irish Festivals since 2008.  In 2011 and 2014, Kristin won first place in the celtic harp professional division of the LaCrosse Irishfest competition

Graduating from the University of Northern Iowa with a Bachelor’s degree in Harp Performance, she studied with Mary Beckman. During five summers she attended the Salzedo Harp Colony, in Camden, Maine, under the guidance of master teachers Jeanne and Alice Chalifoux. In 2005 she studied celtic harp with Maire ni Chathasaigh at the Cairde na Cruite school in Termofeckin, Ireland. Kristin is a Suzuki Harp Teacher instructed by Mary Kay Waddington who developed the Suzuki method for harp. For over 30 years Kristin has been teaching the skills of playing the harp to all ages from young children to adults. Kristin was harp instructor for the Des Moines Public Schools magnet school, Edmund's Academy of Fine Arts from 1986-2007.  As harp instructor at Edmund's Kristin also directed the Des Moines Harp Ensemble. Since 2010 Kristin has coordinated the Ames High School Harp Benefit concert that features students along with professional musicians in solo, and chamber groups raising funds to purchase and maintain harps for the Ames Public Schools. In the fall of 2012 Kristin started teaching harp at Grinnell College and directing the Grinnell College Harp Ensemble.