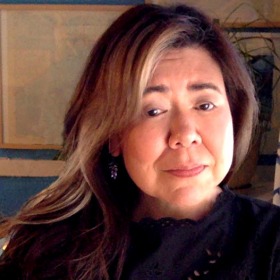 A fourth generation Tejana from San Antonio, Texas and certified army brat, I hold an M.F.A. in Costume Design from the University of Wisconsin-Madison and a Joint Ph.D. in Drama and the Humanities from Stanford University. From Stanford, I have the distinction of attaining the first Ph.D. by a Latinx person in the Department of Theater and Performance Studies' history.

I am also a director, dramaturg, and award-winning playwright. My play Cascarones received invitation for development at the prestigious Eugene O’Neill Theater Center’s Playwrights Conference. My playwriting has also been recognized by the Jane Chambers playwriting competition, PlayPenn, and most recently, my play Golondrinas: a texas story was named a finalist for the 2018 Carnaval of New Latinx Work. In spring of 2020, my play The Day You Begin (an adaptation of National Book Award-winning author Jacqueline Woodson’s book of the same name) will premiere as a commission by Stages Theatre Company (Hopkins, MN) — a leader in theatre, education and production programming for children and young adults.

In 2014 the University of Texas Press published a second edition of my play The Panza Monologues (written with collaborator Virginia Grise). The second edition of the play in publication has been crafted as a dramaturgical casebook and hybrid text that seeks to intervene in the protocols of play publishing. The second edition features both the play's full text along with documentation of its development as well as creative guidance and pedagogical materials to help future producers organize new stagings in a wide variety of communities and settings. As Latinx Studies scholar Alberto Sandoval-Sánchez noted, The Panza Monologues, Second Edition “is the most original and historically documented theatre project to date in Latina/o theatre...It is a lesson in making theatre matter, and it spotlights how theatre is informed by lived experiences and historical processes….” I have also produced a DVD film of the play, recorded before a sold-out audience in East L.A., which captures the play as live performance. As a play, The Panza Monologues has enjoyed numerous productions by professional theater companies, student groups, and academic programs. The book and DVD of The Panza Monologues have been collected by numerous cultural organizations and academic libraries, been the subject of dissertations, articles, and book chapters, and enjoy life in the academy as primary objects of study in terms of contemporary Latinx theater.

In 2004, I founded the Latina/o Focus Group of the Association of Higher Education in Theater—the first entity within ATHE to place scholarly focus on Latinx theatermaking. I sit on the Advisory Board of the Latinx Theater Commons following five years of rewarding service as a founding and active Steering Committee member. Guided by a commons-based approach to organization, Launched in 2013, The Latinx Theater Commons (LTC) is a groundbreaking national movement led by Latinx theater artists, producers, and allies that seeks to transform the narrative of the American theater by amplifying the voices and visibility of Latinx performance-making. The field-shifting work of the LTC earned it Theatre Communications Group's (TCG) 2017 Peter Zeisler Memorial Award. This TCG award “recognizes an…organization whose work reflects and promotes the ingenuity and artistic integrity that Peter Zeisler prized. The honoree will exemplify pioneering practices in theatre and will be dedicated to the freedom of expression and unafraid of taking risks for the advancement of the art form.” For the Latinx Theater Commons, I co-curate and edit (with Olga Sanchez Saltveit) a critical blog series on HowlRound.com entitled “El Fuego,” which documents and discusses the premiere productions of a series of new plays first developed through the LTC's "Carnaval of New Latina/o Work" play festival.

I am always proud to mark that I have also served as a cultural worker in numerous people of color arts and community organizations including New WORLD Theater, the Esperanza Peace & Justice Center, and the Guadalupe Cultural Arts Center.

by Lisa Portes on behalf of the Latinx Theatre Commons & DePaul University. An announcement of the twenty-four finalists for Carnaval 2018. "These plays represent a snapshot of Latinx theatre in the United States today: bold, current, smartly crafted, sometimes elegiac, often naughty. From recent grads to mid-career and on to our veteranxs, these writers speak to and beyond this complex moment in our nation’s history."

“Scholars: Up for Multiple Roles in the Movement”

by Trevor Boffone, American Theatre Magazine, December 2016. A profile of my work as a scholar of Latinx Theater with an overview of my projects for the Latinx Theater Commons.

"Pedagogy Notebook: Latin@ Theatre for Social Action in the Time of Donald Trump”

“A Huge Epic in a Small Package"

Interview. SantaFe.com (audio file), September 4, 2014. Archive of live interview with Irma Mayorga and Daniel Banks, Co-director of DNAWorks, on “The Big Show with Honey Harris” for the DNAWorks/Teatro Paraguas world premiere of Cascarones.

“History Pushes and Pulls in ‘Cascarones’”

“101 Plays by The New Americans, or on Latinidad"