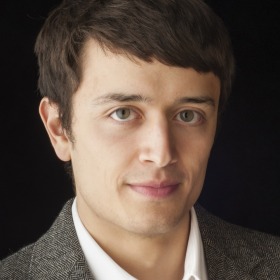 Dr. Nicholas Miguel is active as a baritone soloist and chorister, having created a reputation as a versatile and intelligent singer in diverse genres. Miguel has sung with the professional choirs Vox Humana in Dallas, TX and CORO in Indianola, IA. In August of 2018, Miguel travelled to Germany to sing with Helmuth Rilling in the Weimar Bach Cantata Academy. A regular soloist in Iowa, Miguel’s recent concert appearances include J. S. Bach’s BWV 129, 131, 34, 18, 172, 82, 4, 140, 74, Haydn’s Lord Nelson Mass and Theresienmesse, Mozart’s Requiem, Durufle’s Requiem, Pärt’s Passio, Handel's Esther and Messiah, and Monteverdi's 1610 Vespers. Miguel is also known for his engaging stage presence in recitals and in operatic productions. Recent stage credits include Don Alhambra in The Gondoliers, Sam in Trouble in Tahiti, Sir Joseph in HMS Pinafore, and Comte Capulet in Romeo et Juliette.

In 2018, Miguel received his DMA in voice performance from the University of Iowa in Iowa City, where he also received his MA in 2013. He received his BM with Distinction from St. Olaf College in Northfield, MN in 2010. Miguel’s dissertation on an influential Venezuelan composer, The Art Songs of Modesta Bor (1926-1998), demonstrates Miguel’s fluency in various academic disciplines including musicology, music theory, and phonetics. Miguel received the 2013-2014 Outstanding Teaching Assistant Award for his work at the University of Iowa serving as a TA in applied voice, diction, and voice science. At UI, Miguel served as a TA for the renowned vocologist Ingo Titze. Miguel continues to study voice science and incorporate its principles into his teaching.

Dr. Miguel teaches full time as an Adjunct Music Associate at Grinnell College, one of the nation’s leading undergraduate liberal arts colleges, in Grinnell, IA, where he has worked since 2014. His passion for effective and informed pedagogy has left him in high demand as a teacher of Classical, Musical Theater, and Contemporary Commercial voice. His students win scholarship competitions, perform in musical productions, and perform significant works in recital including Schubert’s Die Schöne Mullerin, and Schumann’s Frauenliebe und leben and Dichterliebe. Miguel’s students’ recitals are recognized for their high quality of performance across a wide variety of genres.

Miguel is also a casual composer/arranger of art song and choral music, an amateur piano accompanist, and an dilettante jazz pianist. He enjoys learning the guitar, collecting bikes, acquiring foreign languages, helping his wife in the garden, and spending time with his two children.