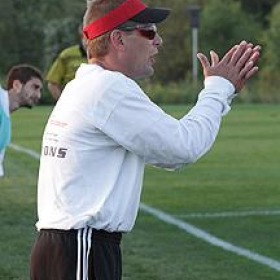 Head Coach Brian Jaworski took over as leader of the Pioneer men's soccer program in 2004 and has built Grinnell into a powerhouse. The 2009 Pioneer squad won the Midwest Conference Tournament title and earned the school’s first-ever NCAA Tournament appearance as Jaworski was voted MWC Coach of the Year.

Jaworski has helped build the Pioneer program into a consistent winner. After his first two teams went 10-19-2 overall and 5-13 in Midwest Conference play, Grinnell has posted a combined overall mark of 46-32-13 and league record of 31-8-6 in the past five seasons. The Pioneers have posted winning records the last five years and qualified for the MWC Tournament each of the past five seasons.

Jaworski arrived at Grinnell in August of 2004, following a long and successful career as an assistant coach at DePauw University that spanned from 1991-2003. During his tenure as an assistant coach, the Tigers went 167-58-12 (.704) and made four NCAA Tournament appearances.

In May 2003, Jaworski was named Aflac National Assistant Coach of the Year in recognition of his hard-work and dedication to the DePauw University men's soccer program. The award is based on a coach's longevity and expertise, as well as contributions to the school and community, and special achievements throughout their careers.

In addition to his work with the men's soccer program at DePauw, he also was an assistant coach for the DePauw women's soccer team that advanced to the NCAA Final Four in 2003.

Jaworski was a standout soccer player for the DePauw men's team from 1984-1988, and he became the first and only player in the school's history to earn all-America honors in men's soccer, earning the distinction in 1988. He currently ranks seventh all-time in career goals scored with 31, and is eighth all-time in career points with 75. Jaworski, a 1989 graduate of DePauw, was inducted into the DePauw Athletic Hall of Fame in 2002.

Jaworski recently started the highly-successful Grinnell Soccer Academy which allowed several young players in the area to enhance their soccer skills. The first group of Academy attendees was honored prior to a Pioneer soccer game in the 2008 season. Also since in Grinnell, Jaworski has traveled around the state to lend his coaching talents to youth teams in multiple communities.

He and his wife Leslie (a staff member of the College’s psychology department), with the assistance of College coaches Tim Hollibaugh and Andy Hamilton, began the Grinnell Sports Camp in 2005. The camp allows participants to learn fundamentals and participate in drills in a variety of sports while also learning the values of sportsmanship and enjoyment of several activities.

Along with his soccer duties, Jaworski has served as head men's golf coach since 2007. He had previously been an assistant track and field coach since his arrival in 2004.

Promoted to Associate Professor of Physical Education in the spring of 2011, Jaworski has also served as head men's golf coach since 2007. The Pioneers’ golf squad achieved the ultimate academic achievement in 2011, being named the Academic National Champion for all of NCAA Division III.

He had previously been an assistant track and field coach since his arrival in 2004. Jaworski resides in Grinnell with his wife Leslie and their three children: Ann Marie, John and Calvin. He and his wife are actively involved with Grinnell's youth soccer program. In addition to his duties as head men's soccer and golf coach, Jaworski also serves as an assistant professor in the Physical Education Department.