On this episode, we talk with Ralph Savarese, professor of English, about his new book, See It Feelingly: Classic Novels, Autistic Readers, and the Schooling of a No-Good English Professor. For years, researchers have believed that autistic people struggle to understand literature. Savarese's experience reading books with his own adopted son, DJ, made him question the prevailing assumptions about autism. Over the course of many years, Savarese read novels with autistic readers from across the spectrum, immersing himself in their intellectual and sensory worlds as they immersed themselves into literature. Savarese, an English professor with a neuroscience background himself, turned these experiences into his book, which is part scientific research, part ethnography, and presents a compelling case for rethinking how we conceive of autism. Before relegating autistic children to segregated learning spaces, Savarese believes we should seek to include them whenever possible, and his experiences with these readers convinced him that they provide integral perspectives to the experience of reading and learning. 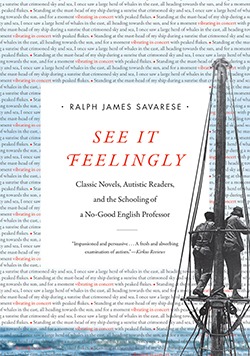 Savarese's son, DJ, produced a documentary about his transition from high school to Oberlin College. DJ won a Peabody Award for the documentary, and went on to graduate from Oberlin. He is one of only a few non-speaking people to graduate college. Learn more about the other readers featured in the book on the book's website. The readers, including DJ Savarese, Tito Mukhopadjay, Dora Raymaker, Temple Grandin, Eugenie Belkin, and Jamie Burke, engaged deeply with the novels, revealing profound insights which emerged from the way their different bodies and brains reacted to the stories, but also from their experiences of stigma and exclusion.

This episode also features the music of Seth Hanson '17, who recently finished his album, Not Too Deep, which he wrote and produced while living in Grinnell during the year after graduation. The album grapples with the tension of how to remember and say goodbye to a special place.