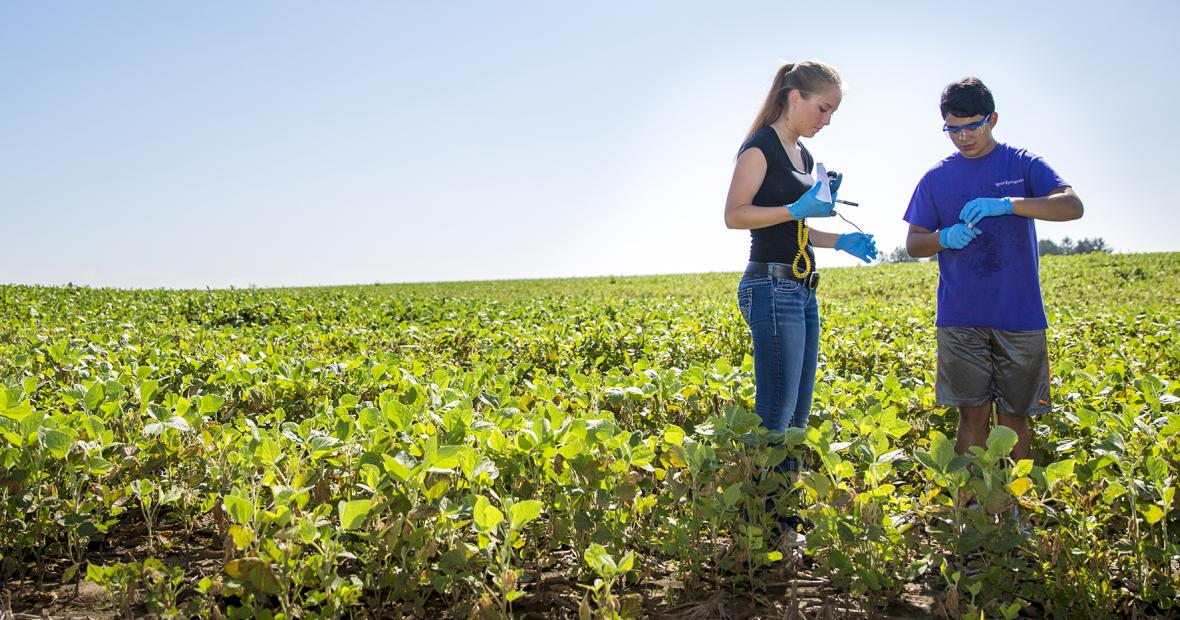 Born in Ambato, Ecuador, Alfredo Colina ’17 emigrated from his homeland to Washington, D.C., when he was 10 years old. Coming to Grinnell as a D.C. Posse Foundation scholar marked his first real experience outside of a big city.

“Being in a rural area surrounded by farms and corn was a change, definitely,” Colina says. “It wasn’t so much a culture shock as much as just a very distinct environment that I was placed in. I was, like, ‘This is new, but doable.’”

Arriving on campus for the first time with 9 other Posse cohorts seemed strange initially, but Colina says he adjusted very quickly. “Once you’re here,” Colina says, “you’re open to the great opportunities Grinnell has, and the Grinnell Science Project (GSP) was one of them.”

A weeklong pre-orientation program, the GSP aims to develop the talents of first-year students interested in science and math, especially those from groups underrepresented in the sciences. To familiarize students with college life, they are invited to participate in mentoring opportunities and sample classes.

“[In the GSP] you are able to work with professors from Grinnell and other students who are potential science majors,” Colina says. “It helped before orientation to settle down and realize ‘You’re in Grinnell, it’s different, and it’s not the city.’ I really liked that I was able to go through that opportunity.”

Now a biology major, Colina worked last summer with associate professor Shannon Hinsa-Leasure on a Mentored Advanced Project (MAP) focused on bacteria and antibiotic resistance in agricultural settings. In November, he made an oral presentation at the Annual Biomedical Research Conference for Minority Students (ABRCMS) in Seattle.

“It was super cool,” Colina says “I was feeling a little bit nervous because I was a student trying to explain what I did to all these major professionals that are big in the field of microbiology.”

Colina says he became more comfortable as he realized that his research — and his presentation style — stood out as distinct.

“A lot of students who presented were trying to explain the mechanisms of various genes,” Colina says. “I kind of took a macro approach to explain a microbiological problem and tried to make it accessible for everyone to understand even if you weren’t a science major.

“It was eye-opening to have people come up afterward and say, ‘Your research is really interesting; I would like you to potentially work for my lab for a summer.’” Colina says. “It was a really great networking opportunity.”

Colina says his research experiences at Grinnell have reshaped his academic and career aspirations. Previously, he had been aiming for an M.D. program. His current plans are to apply for research opportunities next summer and eventually pursue an M.D./Ph.D. program.

“I have a strong connection to research now. Before I thought research was boring, and I didn’t want to be in a lab from 8 to 5, but I fell in love with it last summer,” Colina says. “I want to do microbiology research, dealing with bacteria and antibiotic resistance or some pathway that might lead to prevention of antibiotic resistance.

“I really like microbiology. I don’t see myself doing any other kind of research,” Colina says. “It’s interesting because people might not perceive that bacteria are all over the place, and not all bacteria are bad.

“Learning about what kind of bacteria help, making those distinctions, and making an addition to a scientific field that might have bigger applications in the future is super important.”

Alfredo S. Colina ’17 is a biology major and Posse scholar from Washington, D.C.