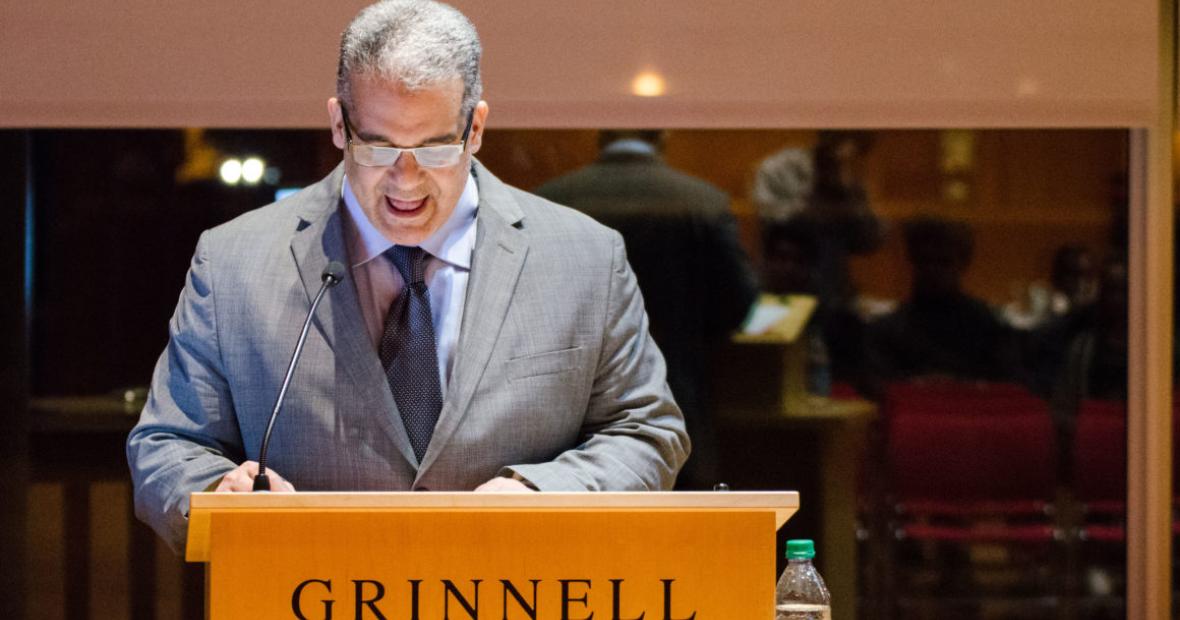 This article has been reproduced with permission from the original author: Steve Yang of the Scarlet and Black

Photo by Kosuke Yo

Antonio Saillant, a sustainable performance consultant and strategist with a background in aerospace and environmental engineering, delivered a lecture entitled “An Intersection Between Film and Sustainability” on Tuesday evening in JRC 101. Saillant discussed his experiences and qualms about sustainability in Hollywood and on the small screen, and emphasized the steps that he believes should be taken to make the industry more environmentally friendly. His visit was sponsored by the Donald and Winifred Wilson Center for Innovation and Leadership.

Saillant has committed his time as a consultant and filmmaker to increasing awareness of eco-friendly film practices as the head of Angel Light Communications, a company that assists in the process of ‘green filmmaking.’ In this regard, he provides suggestions for many practices which could be updated with an eye towards reducing environmental burden. For example, Saillant pointed out what he considers “bad behavior” from the studios producing popular films and shows, such as the film executives who greenlight Michael Bay’s copious use of explosions.

“I feel it is my responsibility to continue the commitment to reduce the impact of climate change and be on the forefront of sustainable business practices,” Saillant said. “The film industry is traditionally wasteful in how it uses its resources. We can make films that are ecological without compromising the quality of the films we make.”

Drawing on the words of John Lennon and actors with strong environmentalist credentials, Saillant sees a meaningful challenge in urgently defeating climate change by spreading awareness through social media about ongoing efforts for climate action plans.

“I want to see solar panels on top of every bus and truck, all over the world. Zero emissions. We can employ the homeless to plant trees. That’s employment to cool the city and clean the air,” Saillant argued. “Better to repair than to re-carbon, right?”

Saillant noted that in Los Angeles, the film industry is the second largest polluter next to the oil industry. He adds that what many see as a high hurdle to be overcome is actually a great opportunity for the film industry to position itself as an innovator in environmental conception problems.

“The solutions that emerge could be applied to other industries. There is a challenge to innovate in areas that [are] energy-intensive, such as the audiovisual sector,” he said, referencing the formidable adjustment challenge of relying on both diesel-fueled generators and LED lighting.

To reinforce his concerns regarding environmental damage as a consequence of film production, Saillant showed clips of the James Bond film “Spectre,” which included the largest stunt explosion ever recorded, and of the eighth “Fast and Furious” film, which features giant vehicles being driven over the ice fields in Iceland. But he also praised films like “Day After Tomorrow,” a 2004 science fiction film depicting a super-storm created from man-made negligence. Along these lines, Saillant suggested that everyday consumers are most productive when targeting the studios producing these wasteful, big-budget films and providing their support to films that are produced sustainably.

“Let’s all do our part to save the environment by supporting the major motion pictures, TV and films that are going green. Target the studio: Hollywood just cares about getting a movie out,” Saillant said. “Let’s solve the problem today … because tomorrow may be too late.”

Audience member Lauren MacKenzie ’20 said that she greatly enjoyed listening to Saillant speak, and appreciated the chance to hear from an industry insider.

“I personally don’t know the intricacies of the film industry, but I was aware of certain production companies preaching [about] being green. It was … very enlightening to hear somebody from the film industry itself saying that’s not true, showing [that] those massive explosions are very unnecessary, and which contribute greatly to the carbon footprint that these companies say they’re fighting against.”