Anything but Bored to Death 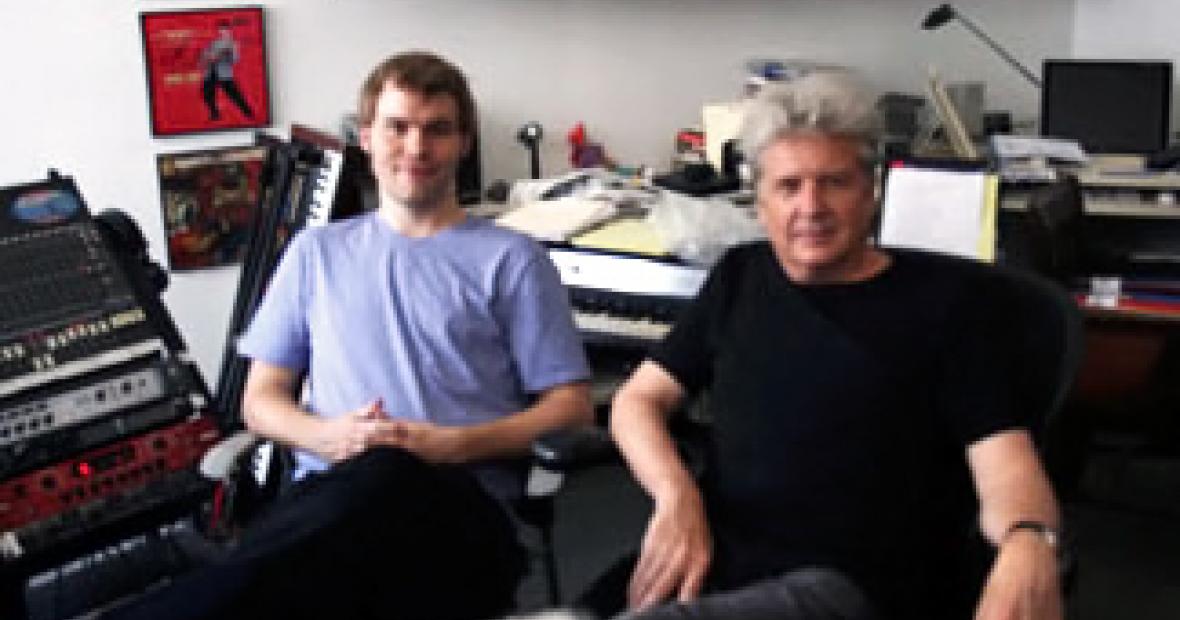 “I come to music as a fan,” says Pat Irwin ’77. But his performing and recording history as a guitarist, saxophonist, and keyboardist with groups like the Raybeats and the B-52s (of “Love Shack” fame) means he long ago acquired plenty of fans of his own. He’s also an accomplished composer of soundtracks for both film and television — his résumé includes scores forRocko’s Modern Life and Class of 3000, among others — and a composition instructor at New York University’s Tisch School of the Arts.

“One of the first assignments I give is for students to create a demo reel that represents them as composers,” says Irwin. One student’s demo was “really beautiful, really memorable,” says Irwin. That student turned out to be fellow Grinnellian Brian Cavanagh-Strong ’09.

Cavanagh-Strong was known at Grinnell for his vocal performances and compositions and his debut musical,Travelers, which he wrote as a summer Mentored Advanced Project under the mentorship of John Rommereim, professor of music, and directed in fall 2008. After graduating, Cavanagh-Strong spent an extra year as the music department’s Curd fellow, choral-conducting, and working on his second musical. Now in New York and trying to break into the music scene as a composer, he had just completed his first year in Tisch’s graduate musical theatre writing program when his music caught Irwin’s ear.

Irwin ended up hiring Cavanagh-Strong this summer to work as copyist on a score Irwin was composing for HBO’s Bored to Death, a TV series now in its third season, about a struggling-writer-turned-private detective.

A sound-track composer’s job is to create cue music that enhances scenes and cues action. “Pat is so good because he makes funny moments funnier,” Cavanagh-Strong says. “The slam of the door or the snap of fingers can really be enhanced by the music.”

Cavanagh-Strong’s job is to make clean transcriptions of Irwin’s score for studio musicians to play in recording sessions that create the sound track. In addition, Irwin often asks Cavanagh-Strong to “analyze chords and spread them across the top of the score in case we want to improvise something. It’s something he can do much more quickly than I can,” Irwin says.

Each Monday, Irwin and Cavanagh-Strong spend the day recording tracks with six to eight musicians. When Irwin makes changes to the score during these sessions, Cavanagh-Strong logs those as well.

Irwin calls the collaboration a “wonderful connection,” that’s renewed his own strong, positive feelings for Grinnell. His mentorship reflects his own mentors during his Watson fellowship in Paris after graduation. There, he worked with John Cage, one of the 20th century’s most influential composers.

“We were playing very adventurous and experimental music,” Irwin says, citing an instance of pinecones wired to microphones. “He influences me even to this day. He had total conviction and he cared about the smallest details. … He had utter faith in the musicality that you could find in the world around you.”

Irwin’s Parisian immersion in the lives of professional musicians inspired him to “get back to New York City and be in a rock-and-roll band,” which he did — and between his years of professional performing and recording and classes at Juilliard and the Manhattan School of Music, he honed the skills that he now uses daily in his composing career.

The transition from Grinnell to the New York music scene has been “really challenging,” says Cavanagh-Strong. “It’s really competitive and not always pleasant.” Working with Irwin, though, has encouraged him. “If being a writer and a musician in New York is like this, it makes me want to do this more. Pat sets an example for how to be in the business.”

The recording sessions they run together have the potential to be stressful, but Irwin’s outlook on work and life is contagious, Cavanagh-Strong says. “The environment is both productive and positive, which is all you could ask for,” he says.