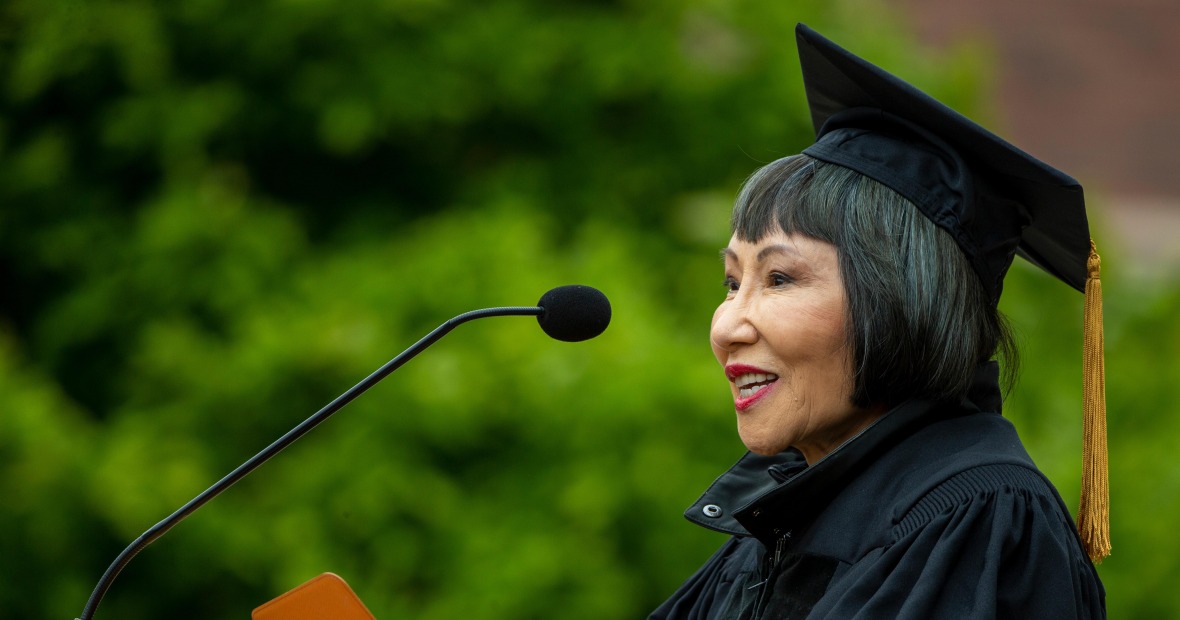 New York Times bestselling author Amy Tan shared the zigzagging path of her career with nearly 400 graduates of the College during commencement ceremonies on Monday, May 20.

“You think that you’re in control of your own destiny, of your own future,” she said. “And then something happens.”

Tan burst onto the national literary scene in 1989 with The Joy Luck Club, an award-winning novel that was on The New York Times bestseller list for 77 weeks and sold nearly 6 million copies. When it became a film, she stayed involved as a co-producer and co-writer.

She followed it up with five more novels, which have been translated into 35 languages. Her latest book, Where the Past Begins, is a memoir about writing that critics call “a must-read for the ages.”

Tan received an honorary Doctor of Humane Letters degree from the College “for her incisive writing on the Chinese-American immigrant experience, and for the enthusiasm she brings to telling many types of stories,” said Michael Latham, vice president for academic affairs and dean of the College.

The College, which prepares its graduates to navigate the world’s complexities and contribute responsibly to the common good, also conferred honorary degrees upon three other accomplished individuals: 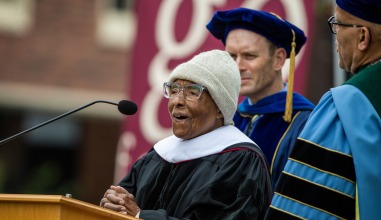 Edith Renfrow Smith ’37 received a standing ovation from the Class of 2019 after Latham introduced her:

“Smith was born in Grinnell in 1914, one of a tiny number of African American families in the town,” Latham said. “In 1937 she became the first African American woman to graduate from Grinnell College. She said that her experience wasn’t always easy, but she had a reliable strategy to avoid conflict and stay focused on her goals. ‘If they’re not nice,’ she said in an interview, ‘Leave them alone.’”

Latham noted that Smith, 104, is part of a Northwestern University SuperAgers study. “The research,” he said, “analyzes the biological and social factors of older adults who have mental faculties of people who are decades younger.”

After accepting her honorary Doctor of Humane Letters degree, Smith approached the lectern, saying “Well, I hope I can get over here without falling.” (She made it.) “And I know all of you wonder why I have a stocking cap on this morning,” she added. “If you don't have any hair, and it's kind of breezy, you have to cover up the bald spot.”

She began to reminisce, saying “Grinnell has been my life. As you know I was born at 411 First Avenue, went to kindergarten to Davis school, and now I am receiving this great honor from our highest part of education. Life has been wonderful. Remember, take every opportunity to do your best. And I have done it, I hope.” 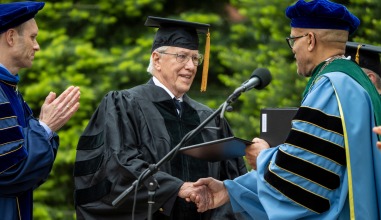 Richard Royal Fisher ’61 dreamed of being an astronaut. “When he learned that he didn’t meet the physical qualifications for the position,” Latham said, “he did the next best thing: He spent a lifetime pursuing work that helps us understand our solar system.”

Fisher earned a degree in mathematics from Grinnell and a Ph.D. in astrogeophysics from the University of Colorado. He built highly specialized telescopes and then went on to work for NASA, where he served as chief of the solar physics branch, chief of the laboratory for astrophysics and solar physics, and director of the heliophysics division. He also awarded research grants to hundreds of scientists.

He received a Presidential Rank Award from the U.S. government and a Distinguished Service Medal from NASA. Grinnell added to his honors by conferring upon him an honorary Doctor of Science degree “for a lifetime of service to help all of us on Earth understand phenomena well beyond our planet’s boundaries,” Latham said. 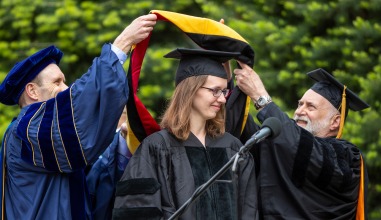 Kristin DeMoss, who teaches English classes at Pioneer Ridge Middle School in Independence, Missouri, knows that poetry is everywhere, Latham said. “In her classroom,” he added, “you might find her helping her students analyze a sonnet by Shakespeare or the lyrics of the latest hit by Katy Perry. She uses their words to show her students how artists succinctly convey emotions and meaning.”

De Moss is renowned for her work with the Poetry Out Loud program and has guided students to top performances in state and national competitions. She also works hard to help all of her students develop their communication skills.

Grinnell awarded DeMoss an honorary Doctor of Social Sciences degree “for her tireless efforts to help her students understand the power of others’ words – as well as the power of their own,” Latham said.

President Kington’s ‘Charge to the Graduates’

After the graduates received Bachelor of Arts degrees, President Raynard S. Kington presented his “Charge to the Graduates.” He described an email he received this year from a 1969 Grinnell graduate who had attended Martin Luther King Jr.’s historic speech at the College in October 1967.

King inspired students and others in the crowd with a “soaring, inspiring call towards social justice and civil rights,” Kington said. In April 1968, after King was assassinated in Memphis, the alumna found herself “obsessed with social justice but fueled primarily by rage and by hate, unable to see my opponents or even my disagreeing fellow travelers with love and respect.”

Kington turned the graduates’ attention to the current political moment in which our country is deeply divided. “It is so easy, and often tempting, for me, and I am sure for many of you, to make rage and even hate our daily fuel,” he said.

The alumna who wrote to Kington told him she learned over time that “Rage is an inefficient and insufficient fuel, and hatred is a depleting force, which sucks our energy rather than sustains it.”

“Rage may actually make us feel good at first,” Kington said. “It may make us feel a burst of energy – and can often be the spark of social change – but gradually rage must give way to other, more sustainable and efficient fuels.” 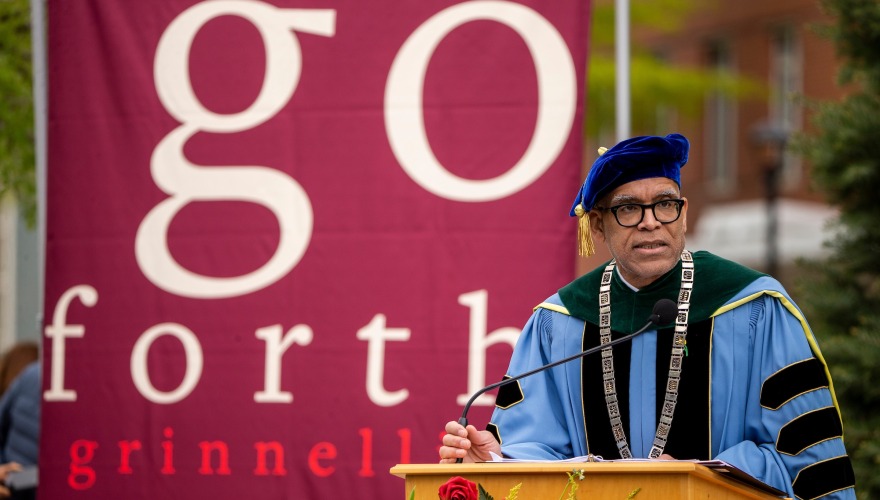 Kington then addressed the future of the class of 2019. “As graduates of Grinnell College,” he said, “you have spent four years gathering your own fuel – the resources that will sustain you through the long life’s work you have ahead of you.

“Now I know we can’t be immune to rage and hatred as humans; it’s part of the human experience, especially as thoughtful humans living in 2019,” he added. “But when you think back to your best memories, the most transformative moments you had at Grinnell, the moments that defined you, I believe you will see those moments were fueled by the very opposite of rage and hatred.

“At those moments, I hope you see that you are fueled by imagination, and awe, mutual respect, and curiosity. You were sustained by the creativity, and compassion, kindness, generosity, and love, both within yourself and from your peers, your mentors, and your community.

“Your tanks are full,” he concluded. “Go forth, Grinnellians, and do the work you were meant to do. May you prosper.”