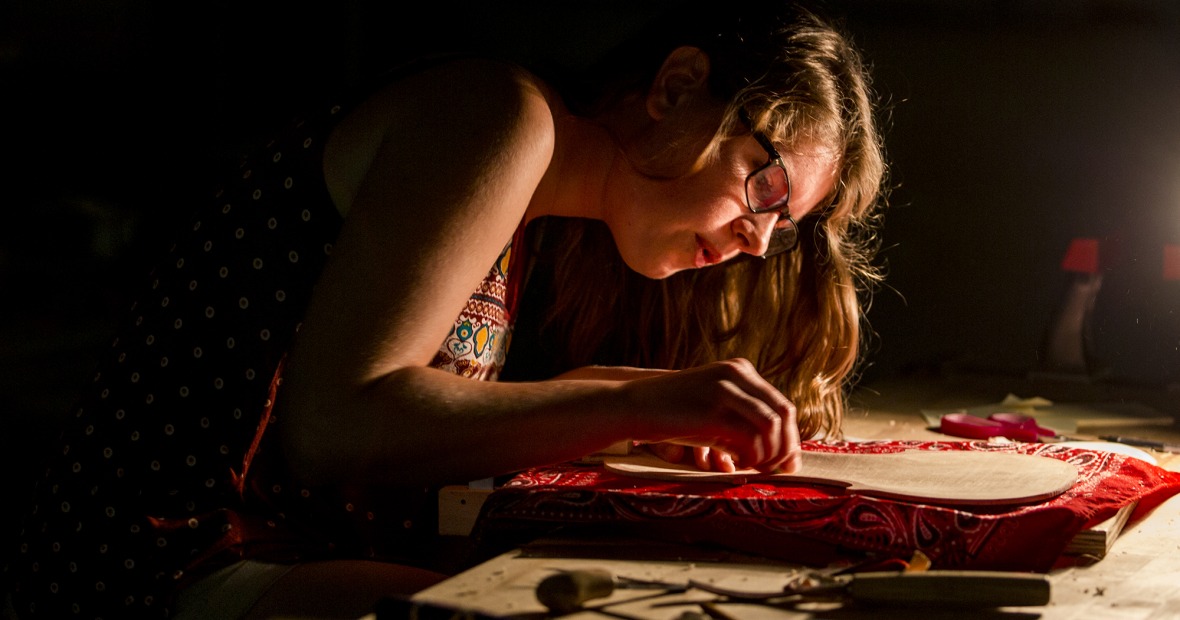 It’s a hot and steamy July afternoon, but the Egan Early Music Room in the Bucksbaum Center for the Arts is quiet and cool. In the center of the darkened space shines a small bright light directed at a workbench. There’s a scent of freshly hewn spruce in the air. The only sounds are a soft, rhythmic scraping followed by a tap … tap … TAP.

Katie Krainc ’17 doesn’t seem to care that interlopers have wandered into her impromptu woodworking shop. Her ear is bent toward a thin piece of wood, listening for a pitch.

From a corner of the room a human voice hums in unison to the resonant tapping, and declares, “That’s F sharp.” The voice belongs to Jennifer Brown, associate professor and chair of the Department of Music.

“It’s supposed to be a couple of steps lower,” Krainc (rhymes with France) says. “I’ll have to take off more material to get the right tone.” The scraping resumes, part of a woodworker’s lullaby that’s been playing all summer from 9 a.m. to 5 p.m., every day.

Brown, whose specialty is the history and performance of Baroque music, is mentoring Krainc’s unusual Mentored Advanced Project titled “Building a Baroque Violin.” It’s the first MAP of its kind at Grinnell, Brown says, and it was entirely Krainc’s idea.

“I like wood, I like the violin, I like building things, and Professor Brown was enthusiastic about it,” says Krainc, who is majoring in music and physics. “I like knowing how things work, and there are crossroads of physics in music, like the acoustic aspect and the geometry of the instrument so that it vibrates optimally.”

Krainc built a traditional stringed instrument called an n’goni for an African studies class last year, but the Baroque violin is her first try at being a serious luthier using highly specialized tools. She brings a passion for the violin to the job, having played the instrument since the age of six. She currently plays with the Collegium Musicum, which Brown directs, as well as in the Grinnell Symphony Orchestra, with which she played a solo concerto in her second year.

The MAP’s ultimate goal is for Krainc to play a Collegium Musicum recital with the reproduction 17th-century instrument of her own making. The violin carrying her unique label will then stay in Grinnell’s collection for other students to play, which Krainc says is fine with her. “Anything that I carve myself I give away,” Krainc says, “so I feel like it will fit in with my whole mentality about the things that I make.”

“To me, this is a model kind of MAP,” Brown says. “It’s taking academic knowledge and historical research and applying them practically to the process of making the instrument. And then, the ultimate test is the music it can make. To me, it’s totally perfect.”

The research phase of the MAP included a trip to the National Music Museum at Vermillion, S.D., to better understand the history and mechanics of the violin and how the instrument has changed over time. “Hopefully,” Krainc says, “I will be able to place what I make in time and get an accurate reading on what I’ve been able to bring out in this instrument that fits the time period.”

Krainc says she’s not sure how she might eventually apply her new skills. She might make more instruments, investigate apprenticeships, or combine her music and physics knowledge in the field of acoustical engineering. Right now she has other pressing things on her mind, like carving, fitting the purfling, gluing, finishing, varnishing, and stringing.

“It’s a very ambitious project,” Brown says. “My measures of success for Katie will be: Did she learn about the history of the instrument? Did she learn about the physical dimensions and properties and how they affect the sound? How did she manipulate those in the process of building? Has she learned skills that will help her in her potential future as a violin maker?”

“And,” Katie says looking up from the workbench, “will I actually make a violin?”

A burst of shared laughter from student and mentor brings temporary relief from the enormity of the task, after which the craftsperson quietly resumes carving … and tapping.

Krainc did indeed make a violin, and she presented her MAP to incoming students at the outset of fall semester 2016. As she related, a couple of things in the project did not go exactly as planned. First, the sound-post setting tool procured for the job did not work properly, and the sound post was not installed. The result was a violin that “plays” but “sounds more like a ukulele,” Krainc said in her presentation.

Second, she ran out of time to apply the varnish, which has significant bearing on the instrument’s tone. Hence, there will be no recital on the instrument as part of her MAP. Brown says she still expects the instrument to eventually make its way into the Grinnell collection and be played, once it is finished. Whether these steps will be part of a continuation of Krainc’s MAP or be accomplished by a student luthier of the future is yet to be determined.