Students look under the surface of L.A.’s entertainment industry 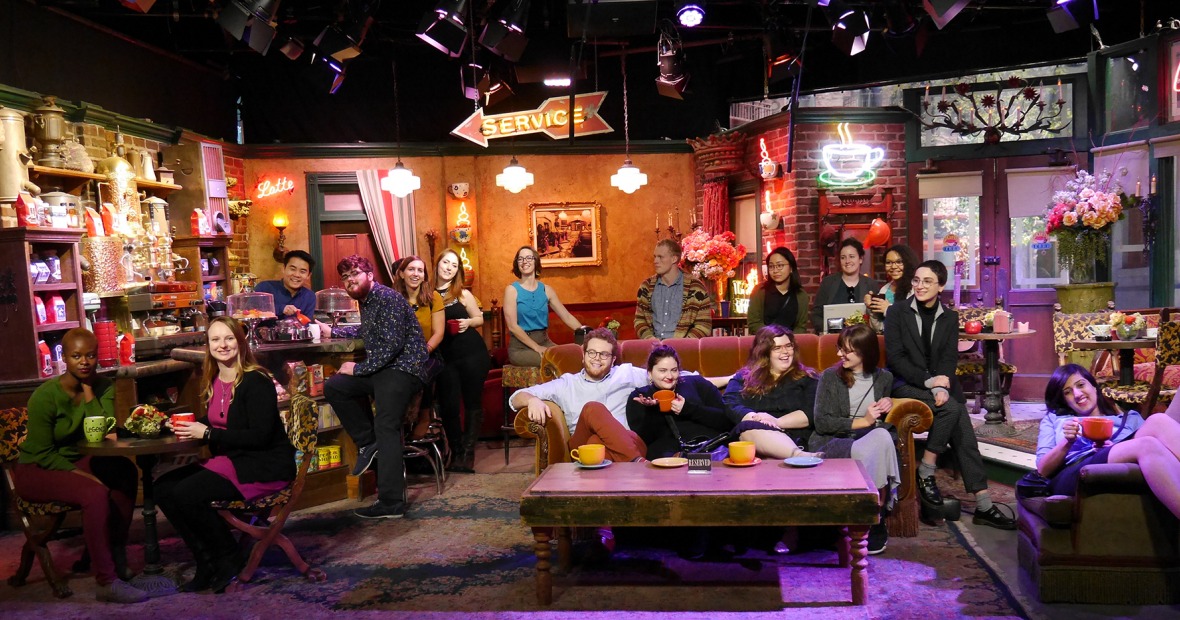 Break time is trek time at Grinnell. For a week in the fall, winter, and/or spring, when classes are not in session, Grinnell students have the opportunity to explore major industries with a group of like-minded students, supportive faculty and staff, and helpful alumni.

Led by Kelly Guilbeau with the Center for Careers, Life, and Service (CLS) and Ashley Schaefer with the Office of Development and Alumni Relations, 16 students headed to Los Angeles to immerse themselves in the center of America’s entertainment industry.

Grinnellians Are as Well Prepared as Film School Students

Their first destination was also one of the most relatable for students from an elite liberal arts college. Meeting with Beth Simons Grover ’03 at Western Costume Co., discussion quickly turned to the importance of research. She led the students into a room crammed with steel shelving units, each heaving with yearbooks, magazines, newspapers, all manner of sources from a vast span of time that would inform costumes that had to be modified or created from scratch.

Other alumni reinforced the message students heard at Western Costume: that they would be as well prepared for this industry as their peers at other colleges that have film programs. David White ’90, national executive director of the Screen Actors’ Guild-American Federation of Television and Radio Artists (SAG-AFTRA), said, “You are as prepared or better prepared than most people in the industry.” Success in the entertainment industry, he said, relies on what students are learning now — thinking and writing clearly and persuasively.

F. Hudson Miller ’80 and his colleague Midge Costin at the University of Southern California’s School of Cinematic Arts stressed both that Grinnell students could be competitive in the industry and that the diverse perspectives Grinnellians could bring would be assets. “Don’t try to be somebody else,” Costin said. “It’s your story, and the more specific you are, the more universal it is.”

It’s no secret that Hollywood has not treated women as well as the system has historically treated men, and given that 12 of the 16 students who went on the trek are women, the experience seemed to be equal parts frustrating and inspiring, but ultimately motivating. From Western Costume, the students went to a taping of Conan on the Warner Brothers lot. Melissa Fandos ’17, an English major from St. Louis, has plans to be a camera operator and was disheartened to see that all the camera ops at Conan were middle-aged white men.

The pendulum swung in the opposite direction at Sunset Gower Studios, where the students met Emmy-award winning producer and writer Ian Roberts ’87, co-showrunner for the TV Land series Teachers. The half-hour comedy is written and performed by its primary cast of six women, and students had the opportunity to be in the writers’ room while the cast rewrote an episode after it had been reviewed by a producer.

Learning How to Network — And Making It Fun

A large portion of the trek required students to network with alums and non-alums in the industry. When Nora Coghlan ’17, an English major from Kankakee, Ill., said she would rather die than network, a lot of heads nodded in agreement.

Dodge Greenley ’11 at Nickelodeon offered some good advice. He suggested that students think of networking as making friends. That seemed to help. The students talked with alumni who shared at least some of their interests and had genuine conversations with the people they met in the industry. After a couple days of practice, students were able to work rooms, exchange contact information, and see various avenues to their futures.

The Importance of Being There

Students also stressed the significance of being in the city of Los Angeles. “It wasn’t until I got here and was in the city for a few days that I actually realized coming to L.A. was a possibility,” said Teresa Fleming ’17, an English/French double major from Newton, Mass. Another student had been all but certain she would be moving to Chicago after graduating from Grinnell. “By Tuesday I knew it would be L.A. instead,” she said.

Being there was only half of it. Several students said they enjoyed seeing people like them doing the work they want to do — a group of women writing and performing in a comedy series, women performing standup to uproarious laughter and applause at the Upright Citizens Brigade, Grinnell alumni creating original work and playing key roles in an industry that from the outside seems insular and impenetrable.

Miller, in discussing his experience at USC, said something that many of the students hadn’t thought of before.

“The most important connections you make,” he said, “will be with your peers.” The students, who had been so focused on making connections within the industry, seemed not to have considered the lateral connections they had already made and were strengthening on this trek.

That idea stuck, and before the week ended, projects had already germinated in the minds of the students and plans were being made that would be put into action as soon as they returned to campus.

More Advice from Alumni: Develop Rhino Skin and Be Nice

At SAG-AFTRA, Tiffany Massey ’12, the most recent graduate the students met with, said that to succeed in the entertainment industry you must develop rhino skin. The rest of the panel at SAG-AFTRA agreed. “Don’t take things personally if you don’t get a response from someone. It’s almost never personal,” she said.

All of the alums on the trip emphasized the value of working hard. Greenley discussed the difficulty he had finding work when he first moved to L.A. and how for the first few years, his passion had to be his sideline. Thanks to hard work, time, and some networking, he now does what he had hoped to — storyboarding for Nickelodeon.

In addition to working hard, it’s important to put your work out there. This was perhaps the most motivating advice for the students, several of whom are now collaborating on a web series. “Getting permission from people working in the industry was all I needed,” says Halley Freger ’17, a studio art major from Charlotte, N.C.

The one piece of advice that students seemed most surprised to hear was the importance of being nice. In his position as a talent agent for ICM, Brian Mann ’76 strives to counter the stereotype of the ruthless, immoral agent and proves that one can be honest and ethical in this business and still thrive. “I worry about the impact of being in the Midwest in a small town for four years,” said Sophiyaa Nayar ’17, a theatre and dance major from Uttar Pradesh, India. “I don’t want to go to a big city and be naive or taken advantage of, but the combination of rhino skin and being nice seems like a good balance.”

Why Treks Are Valuable Career Exploration

It’s not an overstatement to say that this was a life-changing experience for these students. In equal measure, they changed their minds about what they wanted to do, had their desired career path reinforced as the right one for them, and gained valuable insight from other Grinnellians that they can apply to their own futures.

Since returning from the trek, these students have been working with each other and making films, web series, theatre, and all kinds of creative works. Because of this experience, several have chosen Los Angeles as their postgraduation destination, and more are considering it as a possibility for the first time. They’re at the start of careers that will not be easy and probably won’t be glamorous, but Grinnellians don’t thrive on simplicity or comfort, let alone glamour. Now is when the work truly begins.

Other Industries, Other Treks

In March 2017, CLS partnered with the Rosenfield Program in Public Affairs, International Relations, and Human Rights for a spring break trek to Washington, D.C. and Baltimore. The industry focus was human rights and technology. Major stops included the Baltimore Sun and a visit with the senior editor of interactive design, a tour of the Verizon Innovation Center with Ed Senn ’79, and a visit with Russ Damtoft ’76 at the Federal Trade Commission.

Treks are planned each year with students’ interests in mind.