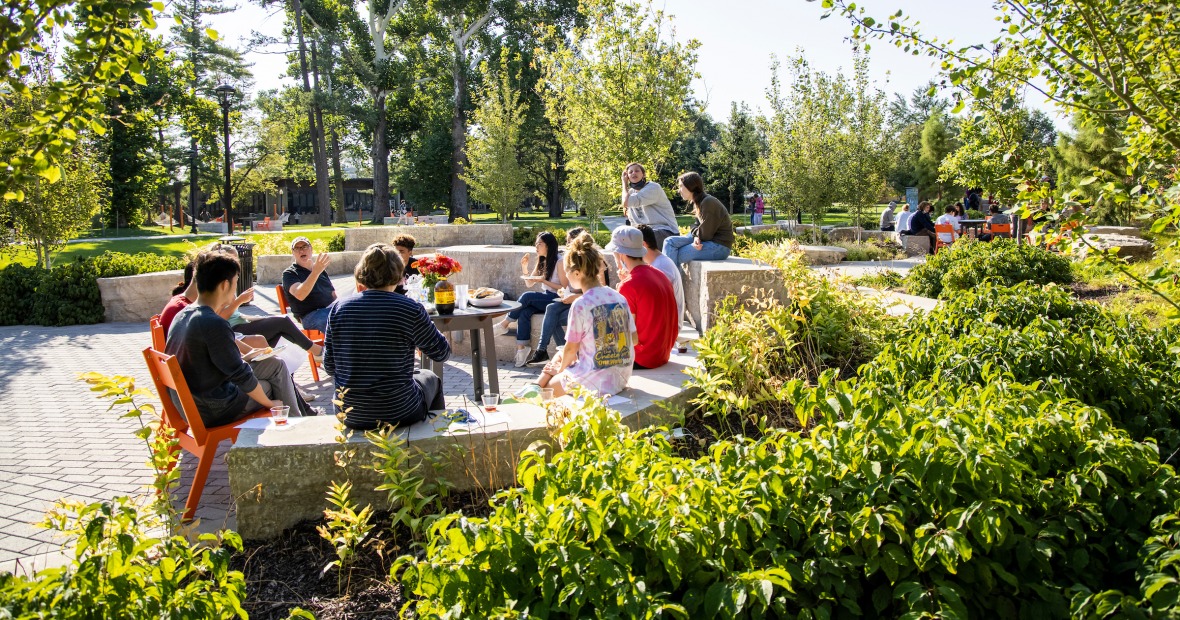 Todd Armstrong's fall 2021 First-Year Tutorial, Comrades in the Kitchen, meeting in an outdoor classroom next to the Humanities and Social Studies Center. One thing that's remained the same since 1971 is the importance of the faculty adviser and student relationship established in the First-Year Tutorial.

One of the things that has made Grinnell College distinctive, particularly since the early 1970s, is the freedom students have to chart their own path through the curriculum. Grinnell adopted a “no requirements” curriculum that eliminated general education and distribution requirements except for one, a new course that’s now called the First-Year Tutorial.

“I would have been satisfied and pleased if this curriculum had lasted for 10 years,” says Beryl Clotfelter, professor emeritus of physics and lead proponent of the proposal. “I didn't think it was going to be a long time. And I’m really shocked it’s gone 50 years.”

A New Curriculum for a New Era

In the late 1960s, changes were afoot at Grinnell. The faculty were concerned about the student experience as well as the curriculum and its staying relevant. After some trial and error with new required courses, Clotfelter became convinced that eliminating requirements was the way to go.

He drafted a proposal for a “no requirements” curriculum, which he submitted to the faculty for consideration in February 1970. No final decisions were made that spring. Discussions continued well into the fall.

One of the concerns about it was that faculty advising would become more difficult without required courses. Under the existing curriculum and its 50+ required credits, advising first- and second-year students consisted mainly of scheduling and helping them get the requirements “out of the way.”

Another wrinkle to academic advising was the arbitrary way students were assigned to faculty. As a result, students and their advisers didn’t necessarily have any interests in common, making it harder to connect.

How could faculty be encouraged to know their advisees better and make more meaningful connections? A small group of students found the answer.

As first-year students in 1969, Barry Zigas ’73 and Anne Walter ’73 arrived at Grinnell ready for the college experience they’d been anticipating — learning what they wanted to learn and interacting with their professors.

For Zigas, his expectations did not live up to his initial experience. “It seemed a lot like a fifth year of high school,” he says.

So when they were invited to participate in conversations about students’ rights and what would make the College better, they were eager to contribute. A group of students, including Zigas and Walter, decided to focus on the first-year experience.

They looked at how it could be improved and become a more satisfying transition from high school. They surveyed two or three dozen other colleges about the details of their students’ first year. One survey response, Zigas recalls, included the description of a “freshman tutorial of some kind.”

“We felt that the tutorial was an instrumental way to introduce students to academic life at a college and help them make a cleaner break with high school, and to enable them to engage more closely with their fellow students and the faculty,” Zigas says.

They drafted a proposal for a tutorial that would be limited in size, be taught by all faculty, involve a significant amount of writing, and make the tutorial leader the students’ adviser until they chose one for their major.

One of the faculty members they shared their proposal with during the spring of 1970 was Alan Jones ’50, professor of history. For several years Jones had been concerned about the experience of first-year students. He was interested in students’ opinions, so it’s likely that he read with care the work produced by the student committee.

Tutorial Was the Way to Make It All Work

In October 1970, in the midst of faculty discussions about the “no requirements” proposal, Jones distributed a memo to the faculty. It detailed how the new Freshman Tutorial Program would work and the rationale for it, including the attributes identified in the student proposal. Jones presented the tutorial idea at a faculty meeting.

Walter attended the meeting, which was open to students. She recalls the excitement of the back-and-forth discussion. “I remember feeling … the thrill [that] we had hit upon something that resonated with most of the faculty,” she says.

The First-Year Tutorial became the linchpin. Faculty became convinced that they could teach writing skills and provide good advising in a curriculum without required courses.

Clotfelter amended his proposal, adding a tutorial provision. In his opinion, “the feature of the no-requirements curriculum which has been most important in its continued success is the tutorial as a device to bring students and advisers together.”

Tutorial as the Academic Introduction to Grinnell

Since fall 1971, the tutorial has been a significant part of the first-year student’s experience at Grinnell. It’s an excellent introduction to college-level writing and thinking by a faculty adviser who gets to know their students’ strengths and weaknesses, yet it’s also evolved and become even more resonant.

Beginning with fall 2021, as the College celebrates its 175th anniversary, the tutorial remains a crucial part of a broader, year-long sequence for first-year students. Learn more about the First-Year Experience and a six-session, ½-credit short course called First-Year Experience: Connections.