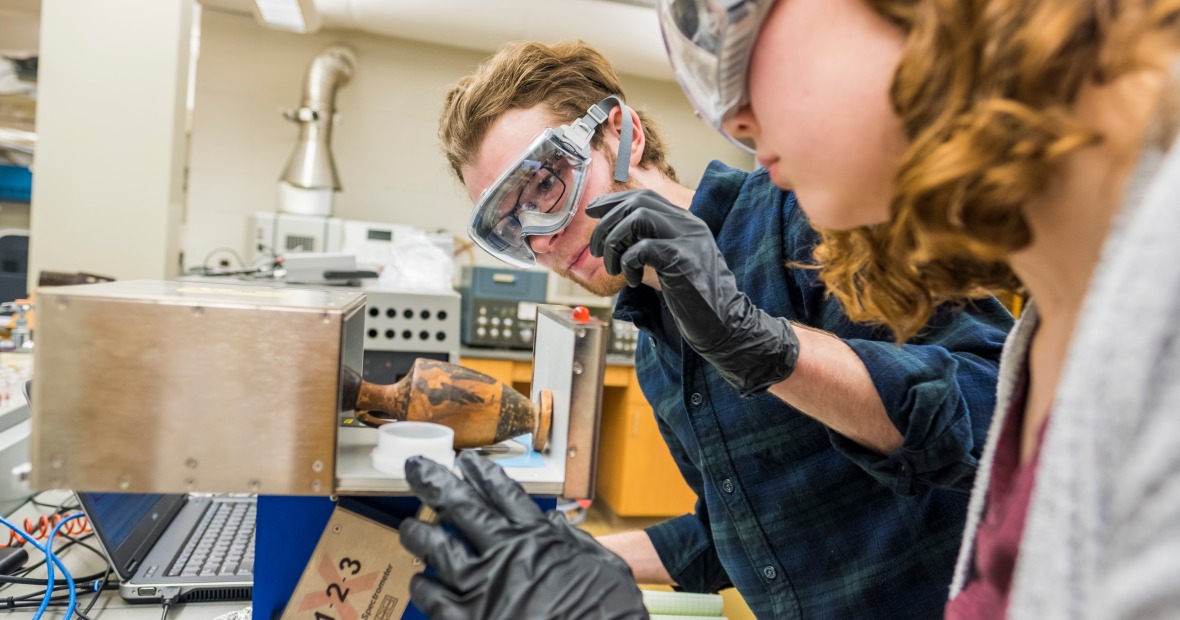 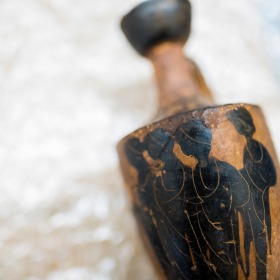 What’s the connection between olive oil, an ancient Greek vase, and X-ray fluorescence analysis? That’s exactly what Nora Madrigal ’19 and Ben Hoekstra ’19 sought to find out from a research project in their Chemistry 358: Instrumental Analysis class. Madrigal, a classics and chemistry double major, and Hoekstra, a chemistry major, had taken a classics course with Monessa Cummins, associate professor of classics, which led them to seek a project topic that might combine their interests.

They started by looking in the College’s archives, housed in the basement of Burling library. “We were thinking about the chemistry right from the beginning,” Madrigal says of their exploration. At first, they considered examining a collection of Roman coins, thinking that they would be able to figure out their elemental composition. But in the end, they chose a lekythos, an ancient Greek vessel generally used to store oil.

The lekythos was particularly promising because of a previous student’s analysis of the piece. As part of a 2005 Mentored Advanced Project, Nathaniel Jones ’06 identified the type of vessel, its probable usage, and the painter. “We didn’t want to go over the same ground,” Madrigal explains. “By looking at the piece on a chemical level, though, we thought we might be able to confirm or refute questions about usage.” 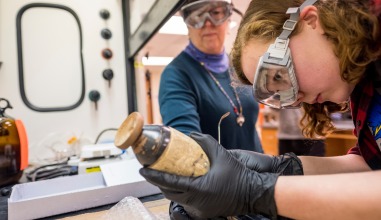 In approaching the object through the lens of archeological chemistry, they were able to expand their study of the classics. Such a scientific lens can fill in the gaps where history or iconographic analysis cannot. “That can add a lot to what we already understand about the pieces based on an anthropological or historical perspective. Adding that scientific analysis can really enhance our understanding of the pieces themselves, their history,” Madrigal says.

Such analysis would not have been possible without the opportunity to do hands-on work with ancient artifacts. Thanks to the archivists and the College’s collection, they were able to observe the lekythos up close and turn it over in their hands, something which Cummins believes is invaluable: “Everybody wants to be in contact with the past, and they don’t always want to do it through words.” Madrigal concurs. “Being able to handle anything that old makes the past seem so much more real. …The past can’t really be theoretical or out of reach when you’re holding it in your hands.”