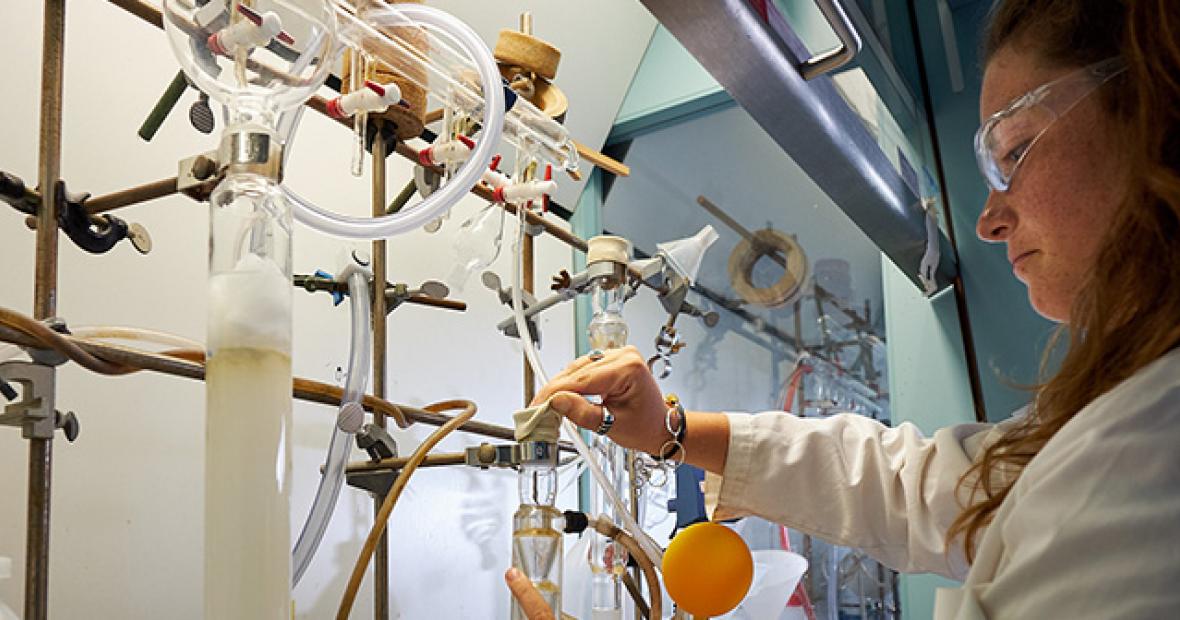 It’s the middle of July at the University of Copenhagen’s Department of Drug Design and Pharmacology in Denmark and Lucy Chechik ’18, has to refill a vessel with hydrogen gas. Hydrogen gas can be highly explosive, and working with it freaks her out a bit.

Chechik walks into the room that houses the hydrogen tank. Taking every precaution, she asks a nearby PhD student who also works in the lab if she’s refilling it correctly.

“Yes,” he says. “Are you sure you’re going to be able to set it up back at your station?”

The PhD student replies, “Are you sure you don’t want me to come with you?”

“Yeah, I’m fine!” She heads back to her lab station with the hydrogen but then looks behind and laughs. He’s following her.

He says, “Oh, I’m just stretching my legs.” Sure enough, he walks her all the way back to the lab, watches her set up the flask, and then walks away.

As the only undergraduate in a lab full of master’s and PhD-seeking students, Chechik gets a lot of attention. “I am the baby in the group. Everyone assumes I know the absolute minimum, the absolute least of everyone.” And they’re right, she laughs. “I have the most yet to learn!”

To understand how Chechik ended up in Copenhagen in the summer of 2017, we have to go back to Grinnell in the summer of 2016. That summer, she lived in Grinnell and completed a Mentored Advanced Project (MAP) with Mark Levandoski, professor of chemistry. She spent the summer studying neuronal nicotinic acetylcholine receptors (nAChRs) – proteins in the brain that are implicated in a variety of diseases including schizophrenia and Alzheimer’s – and squeezing in trips to the public pool.

“I liked researching with Professor Levandoski,” Chechik says. “I think he cultivates a good team environment.” By the end of the summer, the group began to get results.

In the fall of 2016, Chechik went to Copenhagen with the DIS Copenhagen study abroad program. Chechik, who plans to become a doctor, enjoyed getting a chance to meet and interact with female Danish doctors. She relished spending time with her host family who introduced her to Danish food, like rugbrød, a dark bread and koldskål, Danish buttermilk. She also travelled extensively around Europe with fellow Grinnellian Sierra Silverwood ’18.

Still, she felt like she wanted something more. The program was largely comprised of American students and Chechik found herself wanting to get to know Danes her own age, to feel more like a part of the community than just a visiting student.

In the spring of 2017, Chechik returned to Grinnell and continued working in Levandoski’s lab but was determined to go back to Copenhagen.

Getting Back to Copenhagen

Since 2014, Levandoski had been collaborating with Bente Frølund, the principal investigator in a lab at the University of Copenhagen’s Department of Drug Design and Pharmacology. Her lab also does work with nAChRs. In fact, some of the compounds synthesized in her lab are sent to Grinnell and used for testing purposes in Levandoski’s lab.

Levandoski had hoped that Chechik would work in Frølund’s lab during her semester abroad, but due to a scheduling conflict, she was unable to. The summer of 2017 seemed like the perfect opportunity.

“She did most of the work to get it arranged,” says Levandoski of Chechik’s efforts to land a research internship in Denmark. 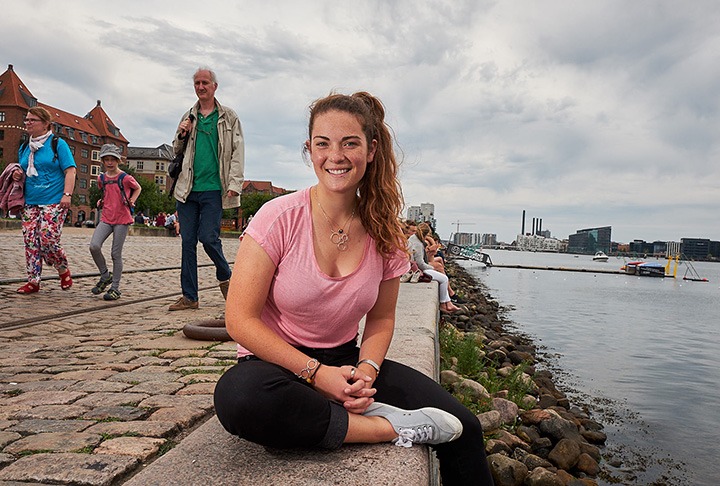 Chechik wanted to return and intern in Denmark not just for a glimpse of post-grad life but for a chance to grow personally too. “I wanted to push myself in terms of becoming more independent,” she says.

After securing the summer position, Chechik applied for internship funding through the Center for Careers, Life, and Service (CLS).

Recently, several academic departments have begun collaborating with the CLS by setting aside funds to support students’ summer internships, explains Jovan Johnson, assistant director of career development and internships in the CLS. “This year was actually the first time that many departments used their money to fund internships,” he says.

The CLS awarded Chechik funding through the chemistry department. The money came from donations from a chemistry alum and parents of another.

The Value of a Summer Internship Abroad

Although Chechik admits she sometimes feels overwhelmed by her responsibilities in the lab, she’s starting to get the hang of it. “I’ve gotten a lot more confident in what I’m doing,” she says. And she’s enjoying it too. “I like the hands-on work and the active nature of this sort of research,” she says. “It’s shown me that I want research to be a part of my medical education.”

Though she’s living with the same host family she stayed with during her semester abroad, she feels far more independent now. “Because this is a job and not school,” Chechik explains, “I have my nights and weekends off so I have a lot more time to explore the city.”

Chechik also enjoys the fact that the lab is comprised of many international students. One weekend, Frølund invited the lab over to her house for an international dinner where everyone made a dish from their home country. Chechik made a salad with sweet potatoes and sunflower seeds in it, ingredients native to the Americas. In addition to growing close to her lab mates, Chechik has discovered something else.

“Before coming to Copenhagen, I didn’t have a tangible sense of this big, international scientific community. It’s cool to realize that yeah, we’re in this lab, but the international community is working on this.”

Chechik has also learned something about the value of talking with people from other countries, even if it’s not about anything important.

“In the lab, we’ve been having conversations about bidets for who knows what reason,” she says with a laugh. “Chinese students are blown away by it. They tell us stories of their first experience with bidets, and apparently, every Italian home has a bidet. I think that even if we’re talking about something as silly as bidets, we’re starting to understand other cultures and other people. That’s the first step in international relations.”

To date, Chechik has had no incidents with the hydrogen gas and she and the concerned PhD student are getting along just fine.

Lucy Chechik is a fourth-year chemistry major from Minneapolis, Minn. She is captain of the ultimate Frisbee team and hosts a campus radio show called "At Least We Think We're Funny" with classmate Kathryn Yetter ’18.