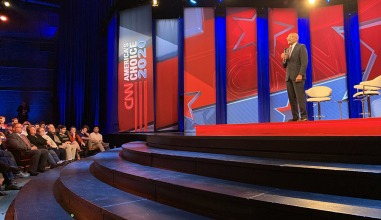 CNN broadcast live town halls from the Grinnell College campus in the Bucksbaum Center for the Arts on Sunday, Nov. 10 with Tom Steyer and Monday, Nov. 11 with former Vice President Joe Biden. Both are working to win over the electorate to become the Democratic presidential candidate in the 2020 election, with primary and caucus voting kicking off on Feb. 3 in Iowa.

This gives Grinnellians a distinct opportunity to engage in the political process as candidates make stops across the state, including on the Grinnell campus and in the community. These political events allow students to gain a firsthand view of the democratic process.

During the town halls, both candidates fielded questions from the audience that was comprised of students, faculty, community members, and independent or democratic voters from around the state of Iowa. 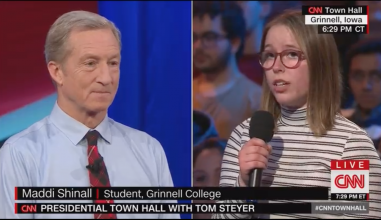 On Sunday, the evening started briskly with the first question topic being the current impeachment proceedings and was followed by the first Grinnellian to pose a question to Mr. Steyer, Winifred Commers ’22 of St. Paul, Minnesota. She asked how he planned to adjust the tax brackets so billionaires would be paying their fair share.

Kiran Loewenstein ’22, who hails from Oshkosh, Wisconsin is concerned about the rising cost of 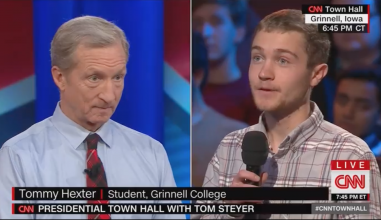 higher education and asked how a Steyer administration would ensure that rights are not taken away from students under his tuition-free system.Tommy Hexter ’21 of Greenwood, Virginia is the co-founder of Farm House on campus. He asked Steyer “how will you encourage a transition from corporate, profit-maximizing, environmentally degrading agribusiness to true, sustainable, community-based agriculture, that takes food from farm to school cafeterias?”

Immediately following the live event, Steyer met with reporters from The Scarlet & Black student-run newspaper who asked questions about his platforms and his plans if he is chosen as the democratic candidate.

The second evening of town halls continued on Monday with Joe Biden. Will Freeman, associate professor and the head men’s track and field coach, asked about the current impeachment process and if it will help or hurt Democrats in the 2020 election. 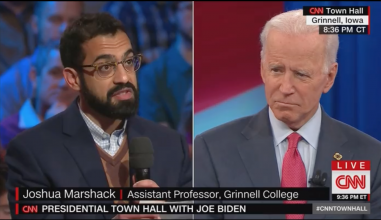 Continuing on the topic, Declan O’Reilly ’21 of Wilmette, Illinois asked Biden what the significance is of the executive branch defying congressional subpoenas and oversight as it relates to the impeachment process.

Andrew Tucker ’21 asked of the former VP, “do you believe the number of troops stationed overseas is vital to supporting our national security or do you think we could have that same level of protection by restrengthening American foreign policy and diplomacy, and allowing these troops to return home?”

Assistant Professor Joshua Marshack focused on healthcare with his question, asking why Biden may support the goals of universal healthcare, but will not support a Medicare for All plan. 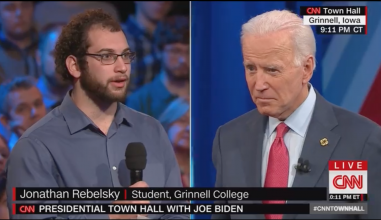 Amelia Zoernig ’21 from New Mexico expressed her concern over climate change and specifically the effect it’s having in the state of Iowa. She asked how Biden planned to protect citizens, homes, and businesses from these increasing changes.

Jonathan Rebelsky ’20 finished off the evening by noting Biden’s long and established career asking, “you’ve talked a lot about your career tonight. Given all the progress you’ve seen and been instrumental in … what changes in American history are you most proud of?”