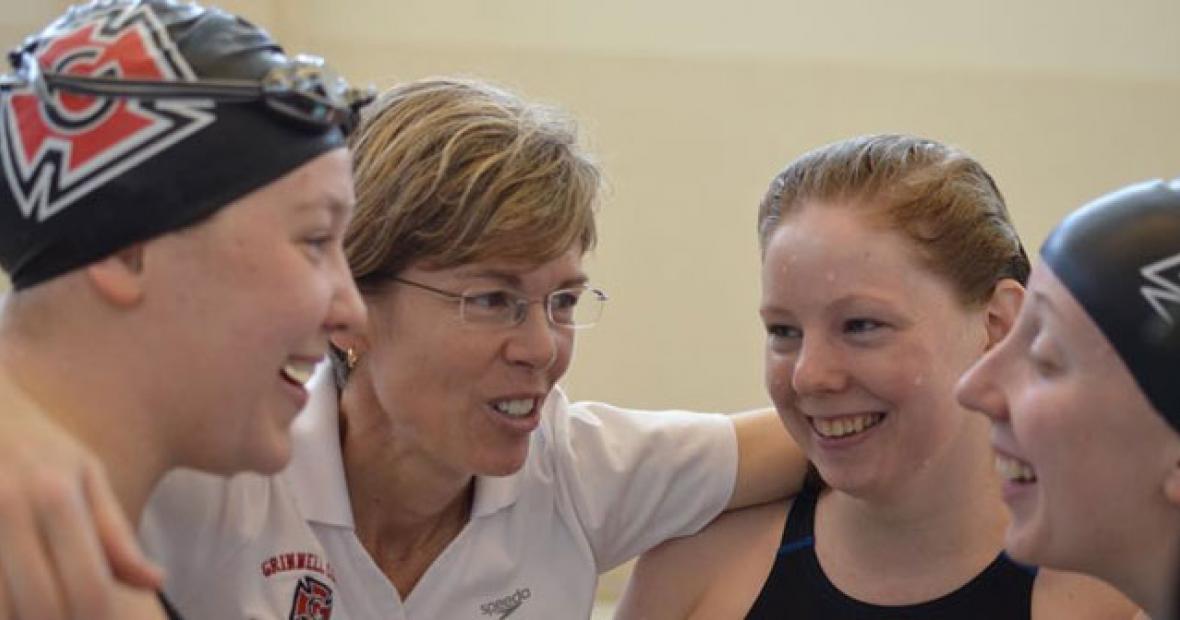 Erin Hurley has led the Pioneers to plenty of success as the Grinnell College swimming and diving coach.

Her performance has not gone unnoticed on the national scene, as Hurley received one of six major awards from the College Swimming Coaches Association of America (CSCAA) at its annual banquet May 5 in Washington, D.C. More impressive is the fact awards at the banquet are rarely presented to coaches at the NCAA Division III level.

Hurley received the Richard E. Steadman Award, which is presented to a coach who, in the opinion of the CSCAA, has done the most to spread happiness in Coach Steadman’s sport. Steadman’s accomplishments include coaching several national swimming and diving champions and serving on the U.S. Olympic Diving Committee for 16 years.

“I am extremely grateful to be receiving this award,” says Hurley. “I want to thank the CSCAA and its members who work tirelessly to help promote the sport of swimming in an inclusive and student experience-enhancing way. Working at Grinnell College, where the athletic experience is closely tied to the philosophy of the liberal arts, creates a coaching and teaching environment that encourages the growth and development of our student-athletes and the joy of their athletic involvement. It’s wonderful to have the CSCAA recognize the work we are doing at Grinnell to foster these ideals.”

Hurley just completed her 21st season as Grinnell’s coach. Also a faculty member, she teaches swimming and triathlon plus is the senior woman administrator for the College’s athletic department.

Her programs have won 29 Midwest Conference titles over the years. She has won 14 league Coach of the Year honors and produced multiple All-Americans, including a national record-holder.

“We are extremely excited for Erin to be honored by her peers with this award,” says Greg Wallace, director of Athletics and Recreation. “Recognition by fellow coaches is one of the highest honors a coach can receive in any sport. Coach Hurley has been tremendously successful with both the women’s and men’s programs at Grinnell College for 21 years. I offer my congratulations.”

Hurley’s efforts are also lauded by the student-athletes in her program.

“Erin has an amazing ability to push you past your limits and make you excel,” says Joshua Tibatemwa ’19. “She’ll then pretend she had nothing to do with your success, although that’s anything but the case.”

“Coach Erin has had an incredibly positive and meaningful influence on my development as a young adult at Grinnell College,” adds Maddy Pesch ’16. She has enhanced my performance as a swimmer over the past four years with her expert knowledge of the sport’s technique and training. As a coach, she creates an inclusive, welcoming and diverse environment that makes each athlete feel valued as a part of the team.

“Coach Erin has also made a lasting impact on my life for the ways she has been a role model to me outside of the pool,” Pesch continues. “At a rigorous academic institution like Grinnell, she shows academic support for her student-athletes, going above and beyond to help each swimmer/diver not only succeed in his or her classes, but also pursue summer job and post-grad opportunities. She takes the time to get to know each athlete as an individual, making an effort to help each student achieve personal goals in the pool, in the classroom and in other extra-curricular activities. I aspire to use these compassionate leadership skills that Erin models as I, too, move forward in my own career path.”