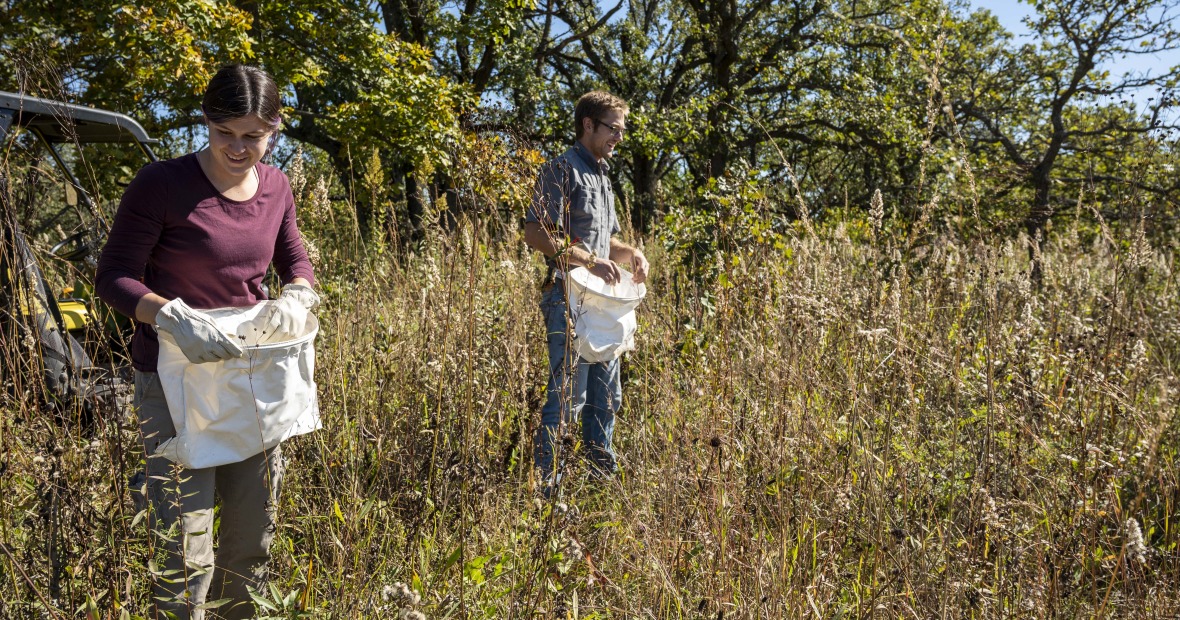 It is a perfect fall day at Conard Environmental Research Area (CERA) — sunny and 60º with a slight breeze rustling the prairie. Most of the plants are golden and past bloom, but a deeply floral scent remains in the air. 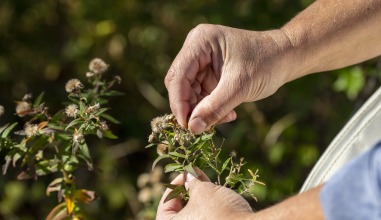 Among the gnarled oaks, tall grasses, and noisy birds and bugs are three people slowly moving through the prairie. Those people — Emily Klein, CERA manager and Center for Prairie Studies outreach coordinator; Jake Hill, CERA horticulturalist; and Isabelle Bruder ’23, CERA student assistant — are collecting seeds from plants with the primary purpose of restoring other land to prairie and managing existing prairies.

Part of the Natural System

Hill always has his eyes out for dense populations of plant species. He also looks for when the seeds of each species are at the right stage to be collected — one sign of that is when the seeds have a “doughy” feel. 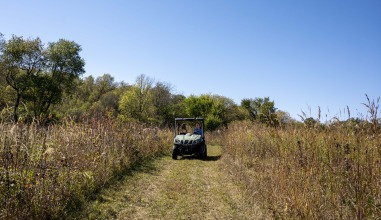 When they are ready, Hill, Klein, Bruder, and Isabella Sferra ’22, the other CERA student assistant, gather at CERA’s Environmental Education Center. They assemble their materials and drive in an ATV along the grass paths to their first stop. Hill demonstrates how to identify the plant they will collect seeds from at that stop, they strap on waist bags to temporarily store the seeds, and they begin collecting. 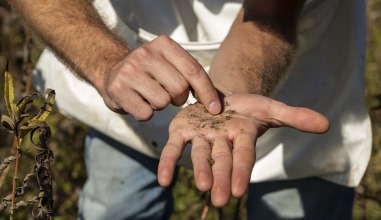 As they move from plant to plant, picking off the seeds and dropping them in their bags, they drift apart, come together, chat, and drift apart again. When they begin to run out of plants to collect seeds from, they move to another location and another species.

Their presence does not seem out of place in the prairie, and that is because it is not. “Human beings are part of the natural system,” explains Hill. And the other beings around them feel the same. As they collect seeds, they often encounter wildlife, who Klein says, “don’t necessarily see you as being out of place with the landscape.”

Back at the Environmental Education Center, in a small room with large windows looking out into the prairie, Hill, Klein, Bruder, and Sferra process the seeds. After drying them with a fan, they use their hands or equipment to separate the seeds from any other plant parts they collected. With relatively simple equipment and many different seeds to process, Bruder says, “I kind of have to get creative.”

After all this, Klein says with a laugh, “we may have a cup of seed.” They add that cup or so of seed to their growing seed bank for later use.

Though the amount of seeds Hill, Klein, Bruder, and Sferra collect is relatively small, their impact is large and layered. Most directly, collecting seeds benefits themselves. “There is never a bad day at work having to collect seed,” says Klein.

The process also enables them to strengthen their relationships with one another. “(Working outdoors) is when I’ve gotten to know my coworkers the best. … It stimulates good conversation and openness, being out and moving around in the fresh air and sunshine,” says Klein.

More tangibly, the seeds they collect help them restore other land to prairie and manage existing prairies. They have more than 85 species in their seed bank, which they can use to significantly increase biodiversity and create more complex and resilient ecosystems as a result. By collecting seeds from rare plants, they can also prevent those species from going locally extinct.

Klein, Hill, Bruder, and Sferra will plant some of the seeds they collected in the prairies on campus. CERA is 12 miles from campus and students are not always able to make the trip out there. This will be a way to bring part of CERA to campus. And rather than replacing a visit to CERA, Klein says, “It’s a nice preemptive to their visit out here.” 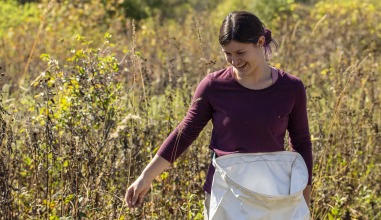 By adding more prairies, managing existing prairies, and communicating their processes and purposes for both, Klein and Hill want the campus community to learn the importance of prairie. “Hopefully (this project) is this type of thing where you start to change attitudes over time and encourage wildness,” says Hill.

Bruder’s own attitude toward the prairie has changed as she has learned more about it. She says, “Now that I’ve been in the (prairie) and now that I’m working with it, I have a much bigger appreciation of it.”