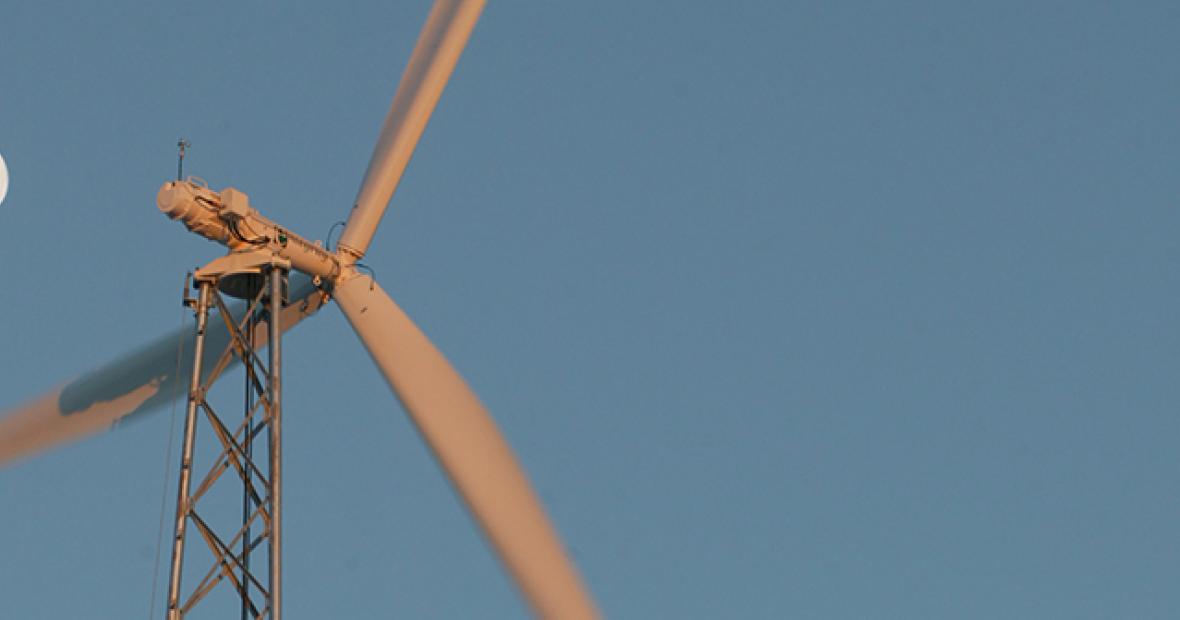 The Grinnell College Board of Trustees initiated a series of studies at its February meeting designed to result in a wind farm to supply power for college use. College officials are now preparing a financing plan, performing feasibility studies and considering locations to gather information for a detailed plan for the trustees. The studies, which could take as much as two years, will assess a wind farm estimated at three turbines costing around $13 million and possibly supplying as much as half the college’s power consumption.

“It’s the right thing to do,” says Jim Reische, Grinnell College vice-president for communications. “It’s a recognition that awareness of our environmental impact and our carbon footprint is in keeping with the college’s overall mission and commitment to social justice. We view sustainability as an important part of that commitment.

“Our overall objective is to build a wind farm for the college that will provide a significant fraction of the college’s energy usage,” Reische continues. “Over time we do expect that it will return the investment, but we’re honestly not looking at this as a business venture. It’s not going to return a profit for many years. We believe it’s an investment in sustainability and in our social mission.”

Members of the college community have studied different versions of wind generation since the 1990s. Mia Devine, a 1999 Grinnell College graduate, studied the potential for a utility-scale wind turbine as a class project in 1996. Now a project engineer with Global Energy Concepts in Seattle, Wash., Devine produced work that ultimately led to installation of a wind turbine in 2007 at the college’s Conard Environmental Research Area (CERA).

“The other value we see for this project is teaching and learning,” Reische notes. “There have been a lot of educational and experiential learning projects around the turbine at CERA. We’re hoping to build some curricular and other opportunities around this project which is pretty characteristic of Grinnell College. Everything we do is a learning opportunity.

“The CERA turbine became a pilot project for the idea of wind generation at the campus,” Reische says, adding that peer colleges like Luther and Carlton are happy with their wind farms.

The trustees adopted an emission reduction commitment to pursue additional wind power opportunities as the CERA turbine went up in 2007. The goal then was to reduce purchase of power by 30 percent. The next year the college began exploring possible wind farm locations, and the college’s President Raynard Kington signed the American College and University Presidents’ Climate Commitment in 2011.

In an unrelated action at the same February trustees’ meeting, the board gave new titles to two college officials. David Clay is now the college’s chief investment officer, and Karen Voss now serves as vice president for finance and treasurer of the college. Clay and Voss have been assigned the task of preparing a financing plan for the wind farm, now estimated to cost $13 million.

Mark Godar and Rick Whitney in the college’s facilities management department are working on a series of engineering and feasibility tests, on possible locations, and on infra-structure implications.

Among the required tests for a wind farm are a site assessment, an avian risk assessment, a wetland delineation study, a beam path study, clearance from the Federal Aviation Administration and a cultural resource and historical survey.

Godar and Whitney are also reviewing possible locations. Land or easements will be needed for both the turbines, now expected to number three, and cables, in effect transmission lines carrying power to its user.

The facilities management team will also prepare a report on any upgrades a wind farm would necessitate at the college. Some power would be immediately used, Reische explains, but power in excess of demand may be generated at times.

Godar and Whitney are reviewing what upgrades would be needed to allow acceptance and storage of excess power and what steps would need to be taken to enable selling power beyond the college’s storage capacity to the power grid. Current estimates are that more than half the college’s current consumption could be supplied by a three-turbine wind farm.

Once a financing plan, a plan for infra-structure and testing are complete and possibilities for land acquisition or easements are assessed, the trustees will study the detailed proposal and make a final decision on a wind farm. Detailed planning could take several years, Reische says.