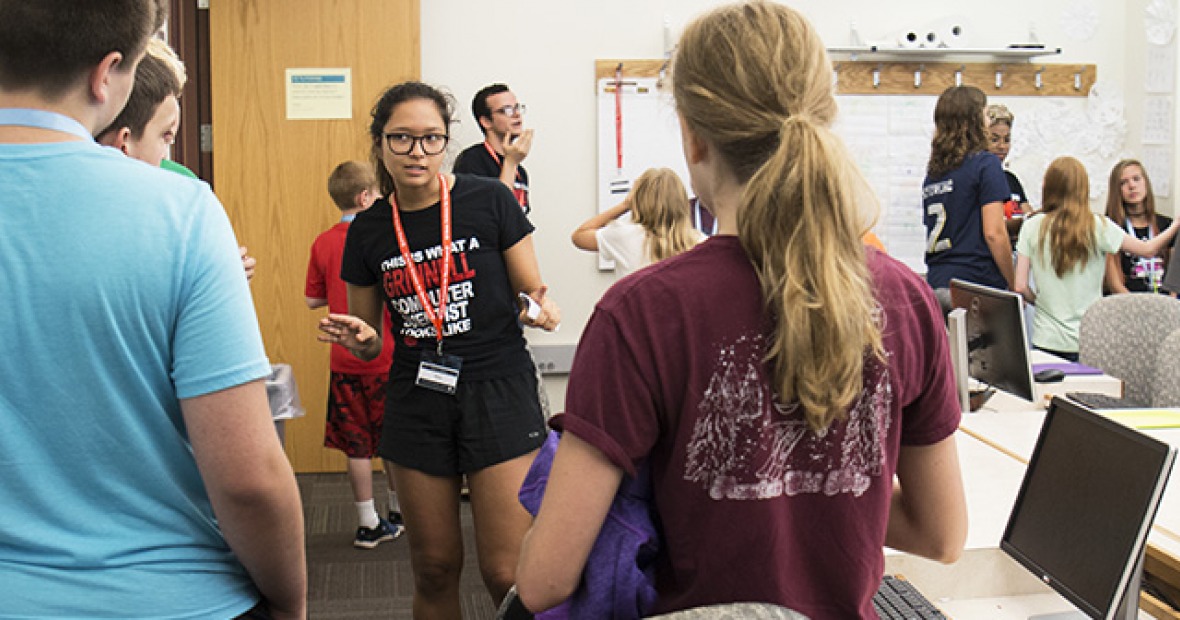 By Samuel A. Rebelsky, Professor of Computer Science
Written for The Grinnell Herald-Register

This week, Grinnell College's Computer Science Department is offering the latest in a series of "Code Camps" intended to help area youth learn about computer science and computer programming. This latest camp focuses on "Data Science for Social Good" and is intended for middle school students. Data science is a new field that combines ideas and skills from statistics and computer science to help people better understand and use data. Data science has been used by businesses to better understand their customer base, aid agencies to understand social problems, and scientists to mine the massive amounts of data gathered from the Voyager and elsewhere. Grinnell alumna Hilary Mason ’00 is one of the leading lights in this field.

The camp opened with an exercise to illustrate the power of algorithmic thinking1. After an emergency in a large city, families have been separated from each other and have been told to go to the local stadium to find each other. Campers worked in teams to design strategies to come up with algorithms to reunite families. Along the way, they considered associated complexities, such as families with different last names, and whether algorithms that work for one hundred people would also work for one thousand or half a million people. Halle Remash ’20 led the exercise. She says, "One of the most meaningful things I did in high school was to volunteer with a local homelessness nonprofit. Thinking about how my computer science skills can make a difference to the world has been really valuable. This camp can help the students understand how computing can impact their community."

The forty campers will consider these issues throughout the week as they work on projects they design to address issues related to social good. In these projects, they will write programs that analyze and visualize data they gather or find. Campers might explore changes in rainfall or temperature, words used in Twitter micro-posts, population data, homelessness data, and more. Projects were among the most popular aspects of Grinnell's "Arts Coding for Social Good" middle school camp, held last year. Those projects included visualizations of the decreasing elephant population, the risks the police face every day, and benefits and challenges of wind power.

Campers also programmed BBC micro:bits, cheap (under $20) computers that include a processor, a Bluetooth antenna, two buttons, an accelerometer, a compass, and a five-by-five grid of LEDs for display. They can even be programmed to play simple tunes. Campers will use them to gather input and to communicate with other micro:bits. "The micro:bits are really cool," says counselor Caelin Bryant ’19. "It's amazing that they can fit a whole computer into something so small and so cheap, and I'm excited to see what the kids do with them." Campers wrote programs on the desktop computers in Grinnell's computer science department and then transferred them to the micro:bits.

These Grinnell students also designed and held a "Craft of Code" camp for students entering 4th and 5th grade, which was held on Grinnell's campus in late June. Herce-Hagiwara, a dual CS/Studio Art major, particularly enjoyed that camp. "When I came to Grinnell, I thought I would have to choose between CS and Art but quickly discovered that there are many ways that CS applies to arts making. It's great to be able to share that with the kids."

The camp attracted children from across Poweshiek county and beyond. Some are alumni of last year's camp. "I came back and brought my sister Emily because I really had fun last year" says Rose Britts, one of the returning campers. Sibling recommendations were a theme: "My brother had a great time last summer and told me to come" says Thea Larsson, whose brother, Hans, will be helping out when he's not setting up computers at the high school. Students also see ties to new initiatives at the middle school. "I really had fun with the finches and wanted to see what else I could learn", says camper Kalli Hart.

The Grinnell students are working as part of Grinnell's summer Mentored Advance Project and Mentored Introductory Project programs, both of which serve Grinnell's commitment to providing research opportunities to all students. The students who designed last summer's camp were able to present their associated research at the SIGCSE Symposium on Computer Science Education, held in Seattle. Professor Rebelsky says, "I am so proud of our students. Most presenters at SIGCSE are faculty members and advanced graduate students. Other faculty members in the audience the told me how thoughtful and professional they found the students' presentation." Some of this summer's students will be giving a workshop on the craft of code at the upcoming Richard Tapia Celebration of Diversity in Computing. This summer's students are already planning to submit their research not only to SIGCSE, but also to an upcoming workshop on Data Science for Social Good to be hosted by the University of Chicago.

The Grinnell College Innovation Fund allows the department to keep the camp fees low - only $25 per camper this summer, which includes lunches in the College's cafeteria and a t-shirt. The Innovation Fund also supports additional scholarships for students on free or reduced lunch. The department plans to offer a third set of camps in summer 2018 and is exploring long-term funding sources to support camps in future years.

The curricula for the camps are available at Craft of Code/ and Data for Social Good. Questions about the camps can be directed to Professor Rebelsky.

Grinnell is in the midst of an initiative to explore the role of data science in a liberal arts curriculum, led by Professor Shonda Kuiper of the Department of Mathematics and Statistics and funded by the Carver Foundation.

1The students adapted this project from one designed by Mikey Goldweber of Xavier University.