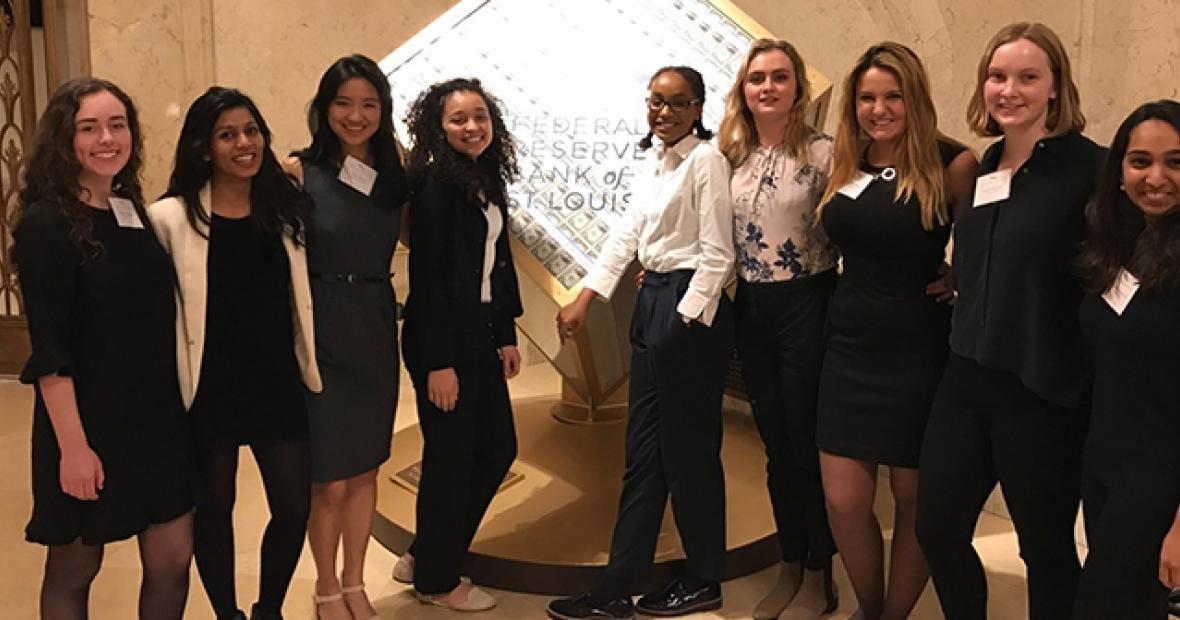 The underrepresentation of women in economics has been an ongoing issue in the field and has affected the participation, opportunities and success of the next-generation of aspiring female economists. Breaking the barriers that prevent women from succeeding in large numbers in the field is a challenging endeavor and the Women in Economics Symposium hosted by the St. Louis Fed is making it happen.

“It is important that young women who are pursuing degrees in economics hear from women in the field about opportunities and challenges,” says Mary Suiter, the St. Louis Fed’s economic education officer and an assistant vice president. “And it is crucial that these young women bring their perspectives, ideas, and talents to a profession that is still largely dominated by men.”

The symposium, which took place on February 22 and is the first in St. Louis’ history, presents research and analytics on women in the field, panels with women from various careers who majored in economics, and distinct viewpoints from pioneers in the field. The Wilson Center for Innovation & Leadership helped 10 students attend the symposium along with 2 faculty member.

According to many of the students, perhaps one of the most memorable moments during the symposium was Mary Daly’s talk, where she spoke about the pervasiveness of women experiencing imposter syndrome in the field. Imposter syndrome is a false and sometimes paralyzing belief that one’s successes are the product of luck or fraud rather than ability. When women internalize this attitude, it hinders their professional self-esteem and broadens the gap that imposter syndrome slips right through.

“Mary spoke about her untraditional path to economics and how many women will, at times, feel imposter syndrome,” Emily Stevens ’18, an economics major, writes. “To combat the negativity of women doubting themselves, Mary continuously reminds her women coworkers to be proud of the value they add. I want to follow Mary Daly’s advice and let other people know that they deserve to be where they are, doing what they are doing.”

Echoing Stevens, Terran Mott ’20, a mathematics major, was particularly inspired by Mary’s authentic, powerful, and comfortable delivery of her speech during the symposium. “I think what most impressed us about Mary was the ease with which she commanded the room. Mary delivered a complex, encouraging, and inspirational message while all the while showing us that she was a friendly and inviting person,” Mott recounts.

Learning about the prevalence of imposter syndrome among female economists — even those at the upper echelons of the — allowed students to recognize their own prejudices and ultimately empowered them to educate their female peers. “Grinnellians, especially Grinnellian women, often doubt themselves,” Stevens points out. “The symposium last weekend inspired me to lead by helping others understand their contribution and inherent worth in a field that sometimes fails to recognize them.”

“We all took the first step of being more cognizant of the bias in ourselves and learning to cope with this untrue feeling. This will help us take the leadership role more often in life, as we know that we are truly worthy of our roles,” Christine Rains ’18, an economics and Spanish double major, writes.

The Importance of Mentorship and Modelling

In addition to hearing other keynote speakers apart from Mary, students engaged with over 100 female students from the Midwest and participated in various workshops and engagement sessions throughout the symposium.

Overall, the symposium provided an inclusive, diverse, and reaffirming environment where students could receive support from their peers and network with potential mentors with wide-ranging backgrounds from the field and industry. Most importantly, the symposium strengthened students’ confidence to embrace the challenges associated with leadership.

“This symposium was valuable to me because it gave me the opportunity to think critically about improving my own leadership skills,” Mott explains. “After meeting so many powerful, practiced female leaders, I've realized that there are plenty of things I can do in the next few years to learn the things that they have mastered.”

Adding to Mott’s insight on the importance of having had the opportunity to interact and engage with female leaders at the symposium, Yufei Wang ’18, an economics and Spanish double major, explains the gap between theory and praxis in leadership; specifically, she explains how this gap was narrowed by the symposium.

“Female leadership in the field of economics and in business has always inspired me. Prior to the symposium, this leadership remained mainly theoretical, not purely so, because of access to stories and news of successful women entrepreneurs and research papers published by women in academia, but mainly so, because a separation still exists between you and the inspiration you get from simply stories and news,” Wang explains.

“The Women in Economics Symposium allowed me to witness and experience firsthand leadership, specifically, female leadership. To read about what’s possible is nice, but to witness what’s possible right in front of you engages you in a completely different way,” she adds. “I hope one day that these women-specific conferences — while still impactful and educational — won’t be as necessary, because women leaders in economics have become so prolific that there’s no urgent need to hold special events to specifically empower women. I’d like to help make that a reality.”