Election Rules, Pressure Cookers, and the Impacts of Trumpism 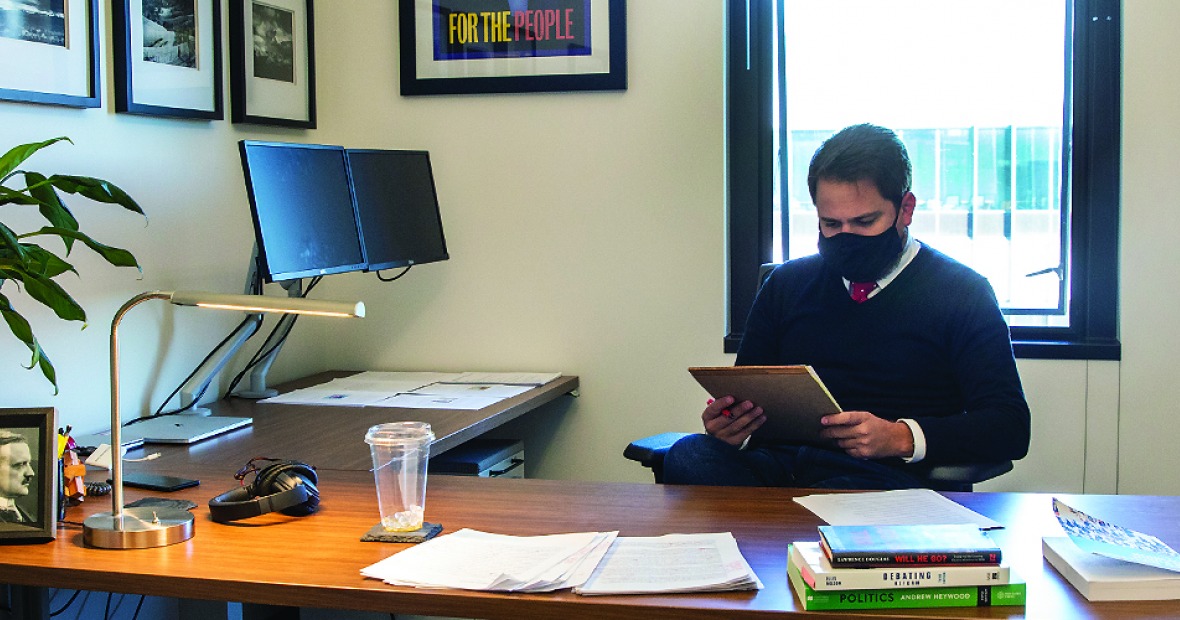 The 2020 U.S. presidential election presents an exciting time for learning about and doing deep research on elections. Taking a class with a professor who specializes in this can help you dive into the topic and pursue your own ideas and knowledge.

Sheahan Virgin ’08, assistant professor of political science, does research on election rules and electoral reform and will teach a comparative electoral systems course in spring 2021.

He’ll also offer a 300-level seminar currently titled Democratic Decline in the Age of Trump. Often in political science, the focus is on democratization and countries that aren’t democracies trying to become them, Virgin says. “We don’t often have classes that ask, ‘What about established democracies backsliding?’”

He describes the United States under Trump as undergoing a sort of natural experiment. “We’re experiencing stimuli from him — his rhetoric, his behavior, his approach to the world — that we haven’t had before,” Virgin says. “Setting aside whether one approves of those stimuli or not, it is interesting to see our institutions, our democratic norms, our political leaders, and voters’ minds in this pressure cooker.”

The seminar will be most interesting if Trump loses the Nov. 3, 2020, election and Joe Biden is inaugurated, Virgin says. “The whole question is to what extent will President Trump bequeath to the nation new precedents — Trumpism — in terms of governing strategy, in terms of communication strategy, in terms of moral leadership.”

How to Prepare Yourself for a Career That Matters

Back in 2004, when Virgin arrived at Grinnell as a first-year student, his plan was to become a geneticist. One of his two loves was bio-chemistry, but his first biology class, specifically the lab, was a struggle. “I didn’t do well,” he says with a chuckle, “and thought ‘I do not want this to be my life.’”

His other love was politics, and after he met Barbara Trish and Robert Grey, two “inspirational teachers” in the political science department, he changed his academic focus.

Virgin was a senior during the 2008 Iowa Caucuses, a year when both major political parties had multiple candidates running for president and the incumbent, George W. Bush, was term-limited. Grinnell students who were eligible to vote were welcome to participate, as always.

Virgin had political signs up in his dorm room and was writing columns about Hillary Clinton versus Barack Obama for the student newspaper, the Scarlet & Black. But the caucuses took place during winter break that year and, at home with his family, he didn’t feel like returning to Grinnell early. “One of the bigger regrets of my life is that I didn’t participate in the 2008 caucuses,” Virgin admits with a laugh.

He graduated in 2008, “right in the midst of the housing crisis and recession,” he says, “and there were no jobs.” He feels for the 2020 graduates who are contending with the novel coronavirus pandemic and the worst economic downturn since the Great Depression.

He didn’t get into grad school his first try, so for a year after he graduated from Grinnell, Virgin waited tables.

“It’s important to reveal to students that things don’t always fall into place in life right away,” Virgin says. “Your career path can be quite serpentine.”

After completing a master’s at the University of Chicago, Virgin found a “dream position” as a research fellow for a nonprofit focused on electoral reform, FairVote, near Washington, D.C. His work included advocating for reform of the electoral college via the National Popular Vote Interstate Compact and using proportional representation for U.S. House elections.

“Doing that job made me realize that I wanted to go back to school and pursue my Ph.D., not only in political science but within the narrow specialty of election reform and election rules,” he says. “It was a formative experience.”

Virgin completed his doctorate from Vanderbilt University in 2019 and feels fortunate to have found his way back to Grinnell in 2020. “It’s really felt like a homecoming,” he says. “Grinnell is a magical place you miss the moment you leave.”