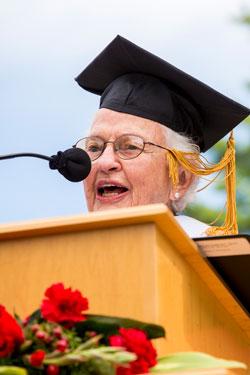 Emily Pfitsch has never held an official position at Grinnell, but few have been better ambassadors for the College than she has been.

Pfitsch arrived in Grinnell with her husband, John, in 1948. While he began building his career in Grinnell’s athletics department, she took Spanish courses at the College. She went on to become a Spanish teacher at Grinnell High School, a position she held for 24 years.

Long before global awareness was a trend, Pfitsch was bringing the world to Grinnell by hosting exchange students and introducing young people to other languages and cultures. She has also brought Grinnell to the world, representing the College abroad during sabbaticals and alumni events. Pfitsch is perhaps best known by Grinnellians as someone who makes the College feel like a second home.

In the 1950s and 1960s, she played an important role for African-American scholar-athletes attending Grinnell. She provided a consistently warm and welcoming presence, regularly hosting students and their families overnight.

For more than 30 years, she has hosted the annual picnic for alumni soccer players in her backyard. The tradition continues to this day and typically attracts more than 100 people. She continues to host trustees who return to campus, and she is a visible and engaging presence at numerous Grinnell events. Alumni who graduated as early as the 1950s continue to keep in touch.

“Emily travels seamlessly among different groups and brings people together,” says one nominator. “She is beloved by literally hundreds of alumni,” adds another.

Good morning to you all, graduates, parents, family members, faculty, administrators and a multitude of friends.

I want to thank those among you who nominated me for this award. I feel very humbled in accepting the honor.

But first, I want to emphasize that I represent countless numbers of others who have, as I have in a support position, enjoyed the richness of precious relationships with students, faculty, administrators, and alumni of this distinguished college.

In 1948, John, after coaching at the university level, had the good fortune of accepting a teaching and coaching position here at the college. He loved his relationships with his scholar athletes, and after 50 years of coaching, he reluctantly retired but continued to enjoy his remaining years with many returning alumni.

And to you, the class of 2017, congratulations. I have met a few of you, and I hope that after your four years here, you are prepared to take on the awesome task of attacking the problems of this nation and indeed the world.

Good luck to you and enjoy this beautiful day.