Enriching the Lives of Zoo Animals 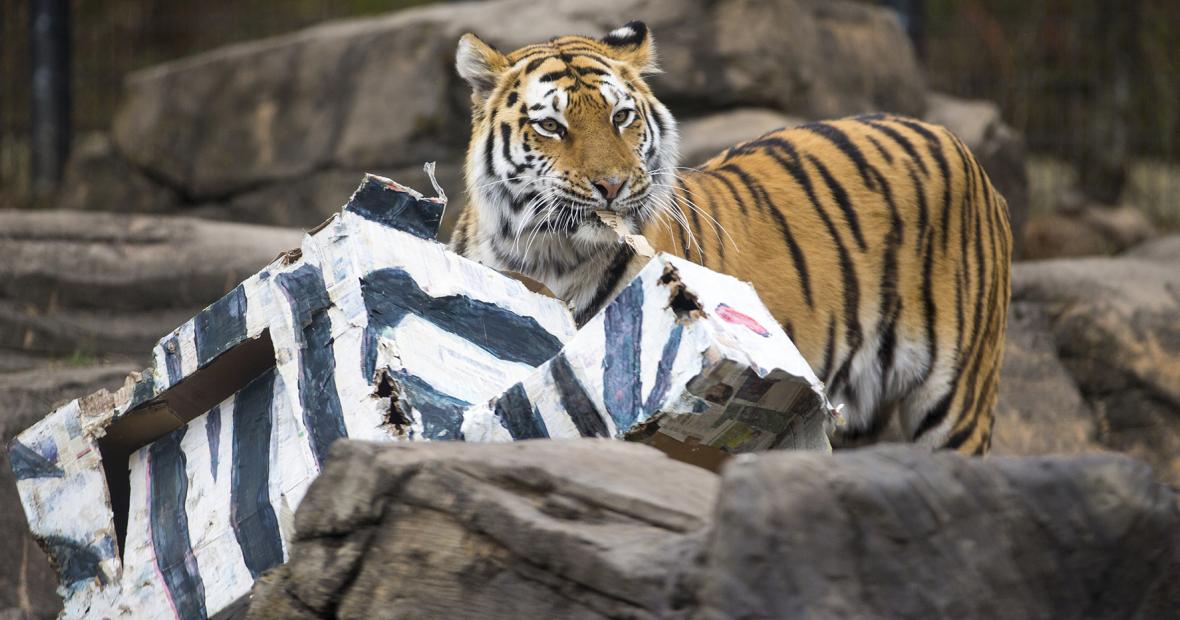 It was straight out of Wild Kingdom.

Misha, an Amur tiger at Blank Park Zoo in Des Moines, approached the horned zebra, batted it with her front paws, then knocked down the prey, which clattered onto a pile of rocks. Resuming her attack, Misha tore off pieces with her powerful teeth, before slashing off the gold unicorn horn and then the entire head.

But no live animals were harmed in the making of this production. The zebra, which indeed sported a gold unicorn horn, was constructed by Grinnell College students from animal-safe papier-mâché, paint, and cardboard.

The activity stemmed from Grinnell's Community Service Work-Study program and the Grinnell Science Project, a pre-orientation program for first-year students designed to increase representation from groups underrepresented in the sciences.

“Creation and destruction — together that's our purpose with this project,” says Sunny Zhao ’18, a biology major from Naperville, Ill. “It would have been sad if the tiger hadn’t played with the zebra and destroyed it.”

“It was really satisfying to see the tiger tear the zebra apart,” adds Mackenzie “Max” Semba ’19, an undeclared major from Portland, Maine.

It helped that the zebra’s hollow stomach received a helping of meat before a zookeeper placed it inside the tiger exhibit.

Grinnell students have collaborated with the zoo for four years to make new and exciting enrichment items: giant bowling pins for rhinos and puzzles made from twine, milk cartons, raw pasta noodles, and origami cardboard for monkeys and birds.

Sunny Zhao ’18 is a biology major from Naperville, Ill. Mackenzie “Max” Semba ’19 is an undeclared major from Portland, Maine.