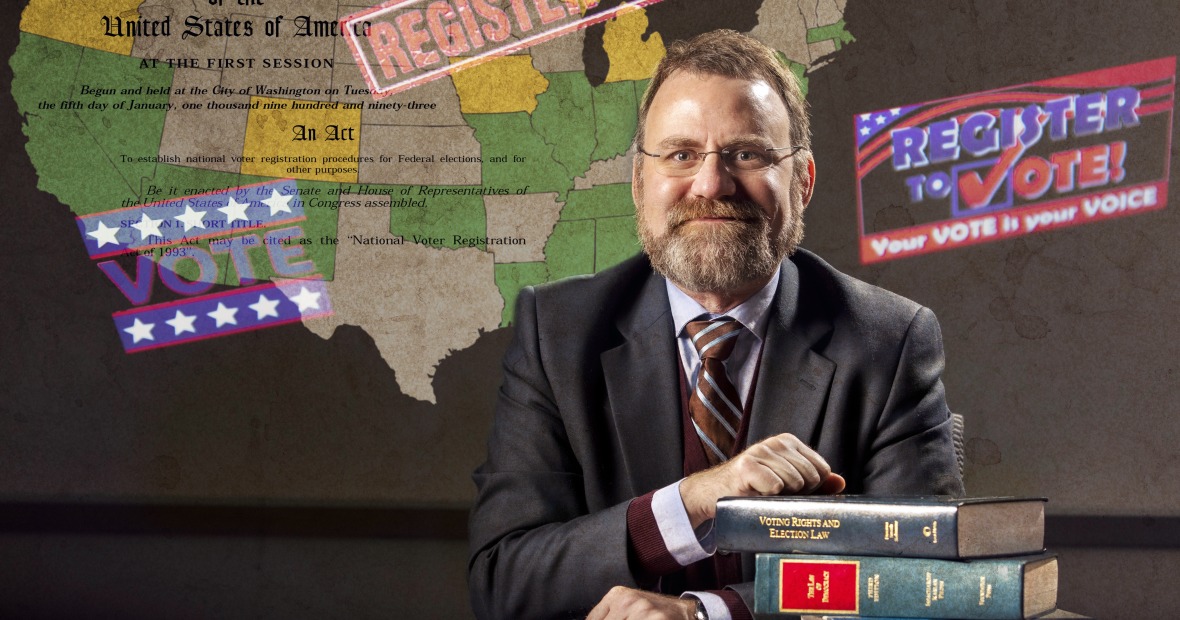 Some things that come to mind when you think of the year 1993 might be the release of Jurassic Park, the “Got Milk?” ad campaign, or Whitney Houston topping the billboard charts. But the mind of Assistant Professor Doug Hess ’91 immediately defaults to a lesser known event, the passing of the National Voter Registration Act (NVRA).

Hess has called the NVRA the “most often ignored federal election statute,” with unsuccessful implementation caused for varying reasons from voter suppression efforts to administrative difficulties. Because of this Hess continues to monitor the implementation of the legislation and offer a series of standard recommendations to government offices across the country. This includes publishing a paper on the impact of NVRA litigation in 20 states and getting help from current students.

But what actually is the NVRA? It’s a law that requires states to incorporate registration opportunities into the application process for vehicle license (commonly known as the “motor voter” section) and many types of public assistance. It also prevents states from removing registered voters from the voting rolls without meeting certain requirements. After President Clinton signed it, the act was supposed to be implemented in all states by 1995.

Using Research to Prepare for the Future

Takshil Sachdev ’19 spent time with Hess as a research assistant in 2019, primarily cleaning the data that the team was collecting from states to be stored and analyzed. Hess says, “We're the only people who have that data really. And so that makes us sort of the national experts on that topic.” Interested in quantitative social science research from the beginning of his Grinnell experience, Sachdev took the opportunity to continue his work with Hess on a Mentored Advanced Project (MAP) that focused on voting rights in North Carolina and the racial effect of non-compliance with the NVRA.

“This experience really enriched my Grinnell experience because it allowed me to conduct independent research as an undergrad. It improved my coding and research abilities significantly which was key in landing my job.” He’s currently working as a research associate with NERA Economic Consulting in New York City.

The work that Hess has been doing for decades, of which the last several years with the assistance of Grinnell students, has been transformative for this legislation. He has helped to register an estimated 3 million low-income citizens. “…work that would have been much less effective without the training in statistics and research methods while at Grinnell,” says Hess.

Ben Binversie ’17 breaks down the specifics of the NVRA with Hess and his students on episode 9 of "All Things Grinnell."