Studying microbiology in an extreme environment 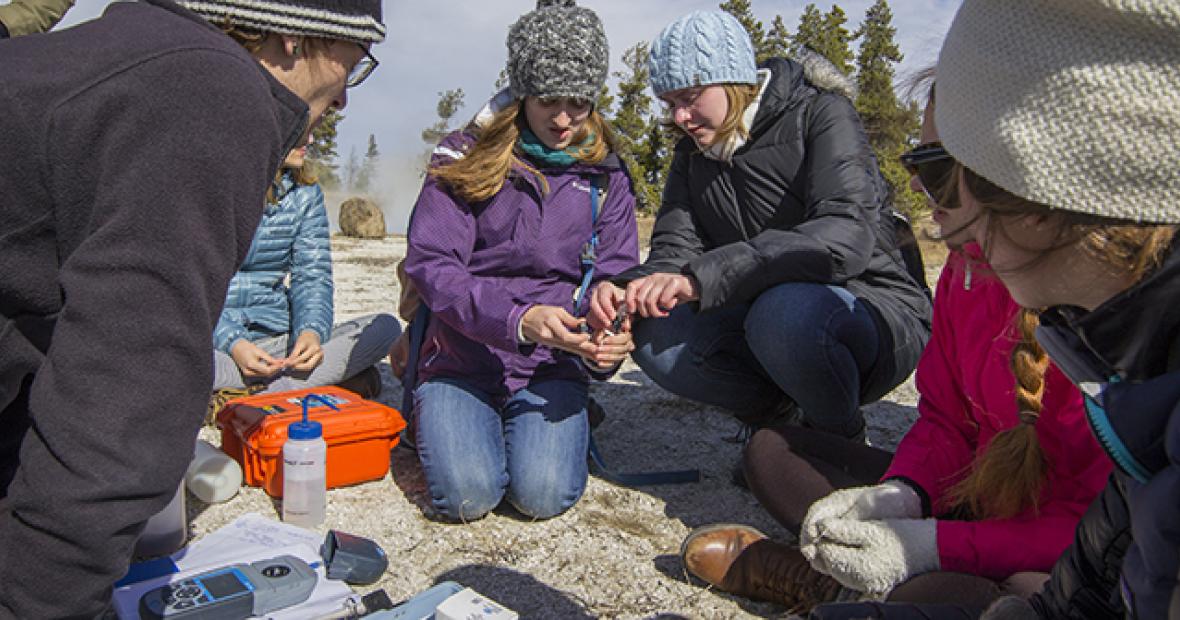 The Grand Prismatic Spring in Yellowstone National Park is known for its rainbow-like coloration: red, orange, yellow, green, and blue. 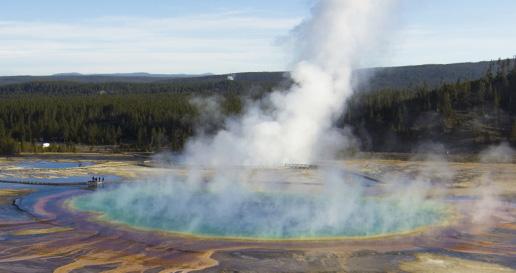 “I would have assumed that chemicals in the water were the cause of the rainbow water — but it's the microbes,” says Tim Burnette ’19. “The distinct color bands represent differences in thermophilic microbial mat communities.”

Burnette is studying the diversity of microorganisms and how they interact with their environments in Biology 365: Microbiology with Shannon Hinsa, associate professor of biology. The class traveled to Yellowstone over fall break to study microorganisms in extreme environments.

“I'd never been to Yellowstone before, so seeing it, alone, was amazing,” says Burnette. “But seeing it while talking to scientists who conduct research in the park … was [even more] amazing.”

“There’s a trail that goes around [the Grand Prismatic] and we did many laps because it was just that cool,” admits Alfredo Colina ’18. “It made me feel really small because of the amount of microbes and the diversity of members that are present everywhere.”

Hinsa arranged for the class to meet with researchers at Montana State’s Thermal Bio Institute and conduct on-site testing allowed through an education permit. “I wanted students to learn about the experiments taking place here and get experience working in the field,” Hinsa says.

Students were able to test runoff samples for pH, iron, sulfide, dissolved oxygen, silica, and temperature at Ojo Caliente spring. In addition, temperature guns were used to monitor heat fluctuations around geysers and springs throughout the park.

The course-embedded travel was possible thanks to an Innovation Fund grant. Hinsa says, “Several key discoveries in microbiology have happened in Yellowstone and I knew that a trip to Yellowstone would be impactful to the students and change the way I teach the course.”

“It is incredible to not only learn about the geology and chemistry behind the giant volcanic caldera [that is Yellowstone] from a park geologist, but to also study the microorganisms that are able to thrive in these conditions,” says Monica Loza ’18.

“Through GSP, I was able to know that there were paths in science beyond becoming a doctor,” says Colina. “Now, I want to pursue an MD/PhD with a focus in microbiology, as many antibiotics and medicines have been discovered in microbes.

“I appreciate the fact that these kinds of programs exist at Grinnell. I am happy that someone provided the funds and the initiative to not only learn in the classroom but in the field.”

Tim Burnette ’19 is a biology major from Virginia. Alfredo Colina ’18 is also a biology major with a concentration in Latin American Studies. Monica Loza ’18 is double majoring in biological chemistry and sociology.