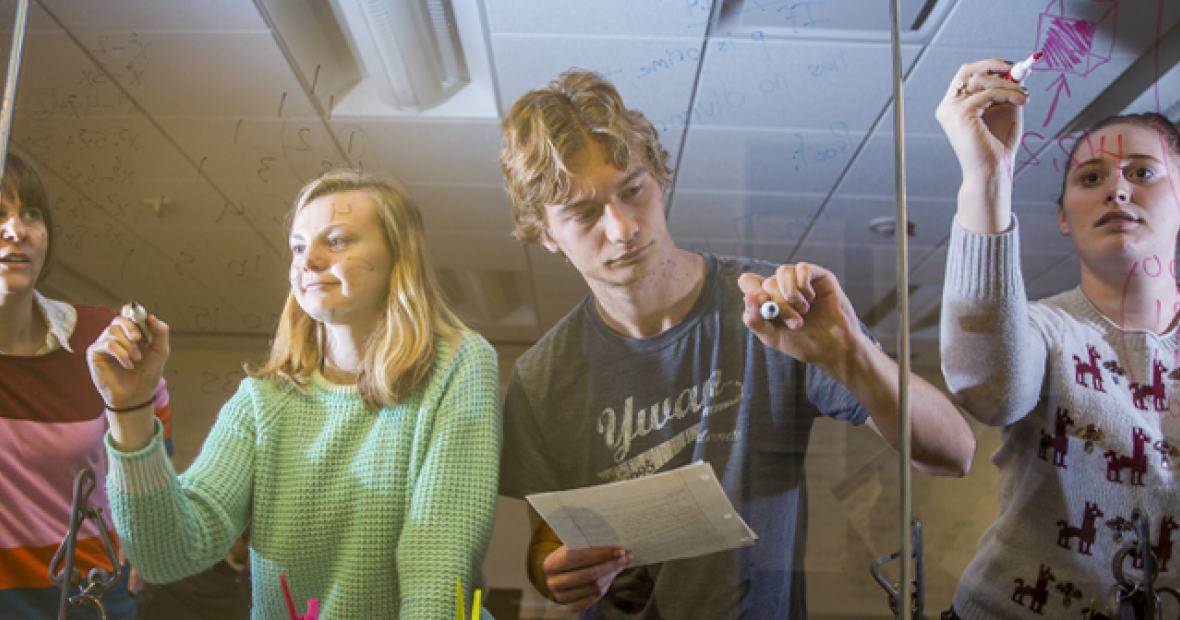 At Grinnell, finding professors who want to mentor you is easy. Working with smart, engaged students is what professors love.

So when Karen Shuman and Chris French, associate professors of mathematics and statistics, decided to offer a summer research project to first- and second-year students, they had more students apply than they could accept.

“We thought we’d try a Mentored Independent Project (MIP) that would give students a taste of research and the mathematical writing process,” Shuman says. “Our hope was that the experience would encourage students to continue to take mathematics and statistics courses and to apply for MAPs [Mentored Advanced Projects, available to second- and third-year students] and off-campus programs in subsequent summers.”

Shuman and French selected six students to participate in the MIP. All had completed linear algebra or beyond. Lizzie Eason ’17 and Caleb Leedy ’16 were interested in math but had never done research before and wanted to find out what it was like.

Rachel Knak ’17 saw the project as a way to “solidify my decision to become a math major.”

The Benefits of Math Research

During the first two weeks of the five-week MIP, students spent six hours per day learning about graph theory and spectral theory. For the next two weeks, they explored their own projects, with guidance from Shuman and French. In the final week, students focused on writing up their results and giving mini presentations to each other.

“The best part of the MIP was I got to do whatever I wanted to do with math,” Knak says. “I needed help from Karen and Chris, but my work was a lot more original than most math classes.”

“I got to dig in deep to what numbers mean,” Eason says. “I had more creative freedom.”

“Now that I understand math research itself,” Leedy says, “the process isn’t so foreign. It’s been very interesting and rewarding.”

French notices quite a difference among math students who’ve done research. Shuman agrees. “These experiences do far more than a year of courses.”

Developing a Community of MIPsters

“There was an energy and enthusiasm I haven’t seen before,” Shuman says about the students who became known as the MIPsters. “That was partly because of the community they formed.”

French agrees. “Caleb Leedy did really nice work on a project involving writing computer code to compute certain characteristics of graphs. Rachel Knak, meanwhile, was doing a more theoretical examination of certain aspects of graphs. I got so excited when the two students joined forces, and Rachel realized her project could be advanced because of Caleb’s code. “

“You could hear the cheering in the corridor,” Shuman says.

It wasn’t just the MIPsters supporting each other, though.

“Karen and Chris were super supportive,” Eason says. “They pushed us enough to get to the answers ourselves and helped us figure out what to look for.”

Even though Shuman and French are married, Shuman says, “We’d never done mathematics together before. We weren’t sure how it would work, but in the end, we decided we’d like to do more math together.”