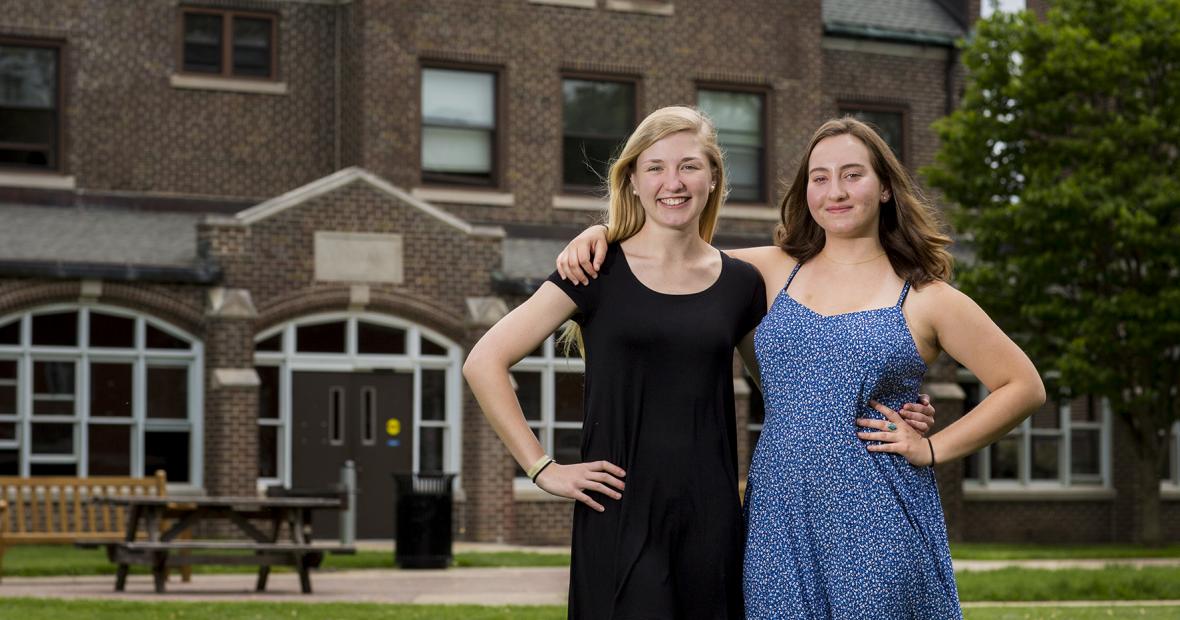 If you’re jittery about who your roommate will be in your first year of college, stop worrying. Not only do you have a lot of control over a good match at Grinnell, there are real people who care about it.

“Students fill out an application that asks for different types of preferences — identities, music, study habits, things like that,” says Joseph Rolón, director of residence life. “Other schools put them into a computer program and match them up. Here, humans actively research the students and care about how they’re matched. We literally spend three days in the summer hand-matching 400 first-year students.”

Rolón says it’s important that students are honest on the roommate form. “What students say on paper can be very different from who they are when they get here,” Rolón says, “especially if their parents were looking over their shoulder when they filled it out or their parents filled it out for them. Students need to be very honest because that’s what we’re basing our matches on.”

“What was really important for our relationship is that we didn’t attempt to get to know each other before we actually met,” Fuchs says. “That works for some people, but our relationship took off without the virtual pressure of telling our life stories on Facebook.

“I think the roommate form was a huge part of our positive relationship, and I think that the questions were really good,” Fuchs says. Questions about lifestyle and personal tastes are important, she says. Being asked to describe your ideal roommate “allows you to think beyond the basics and write down not just what you want in a roommate but potentially your first real friend in college.”

She advises incoming first-years to give themselves time to reflect about their answers and to understand that their roommate doesn’t have to be their best friend from the get-go. “I think there’s a lot of pressure on people to have that happen,” Fuchs says.

“Start off by prioritizing the basics, like when you go to bed and how neat or messy of a person you are,” Fuchs says. “Definitely be honest. If your roommate and you are best friends, that’s fine, but hopefully you’re not fighting about what time the lights should be turned off.”

Rachel Swoap ’19 had an unusual experience that turned out well thanks to the efforts of residence life staff.  After arriving at Grinnell, Swoap learned that her assigned roommate had withdrawn from the College. For a time she didn’t have anyone scheduled to room with her. “That was like the last thing I wanted to hear,” Swoap says. “I thought, what’s going to happen to me?”

Arriving early for the Peer Connections Pre-Orientation Program (PCPOP) was good, Swoap says, because she had time to unpack and get familiar with her surroundings. Without a roommate for most of New Student Orientation (NSO), she had begun to accept the idea of living alone.

“The last night of NSO, I got an email saying ‘We have a girl who’s in a triple. Would you want to meet up with her and see if she could live with you?’ I got excited all over again,” Swoap says.

Swoap met Liz Williams ’19 at an NSO event that night. “We hit it off and talked for two hours,” Swoap says. “We decided it would be perfect if we lived together and she moved in the next day. I got to meet her parents and help her unpack. It all happened very fast.

“We come from very different backgrounds,” Swoap adds. “Liz is from D.C. and moved around a lot as a kid. I’m from small-town Massachusetts. But it worked out so well. She’s fantastic and I’m just really happy about how it turned out.”

It’s been such a positive experience that the two women plan to live together again this year. Swoap says the roommate form helped make it happen.

“I tried to answer questions as honestly as I could and I think she must have done the same, because we have very similar habits and even personalities,” Swoap says. “I guess something in the survey came through that they noticed.

“I think a lot of first-years get really nervous about who they’re going to live with for an entire year, but I’m just really sold on this whole process now,” Swoap says. “It’s a big deal who you’re living with and to have it work out so well is just amazing. I’m very grateful for that.”