First in Your Family 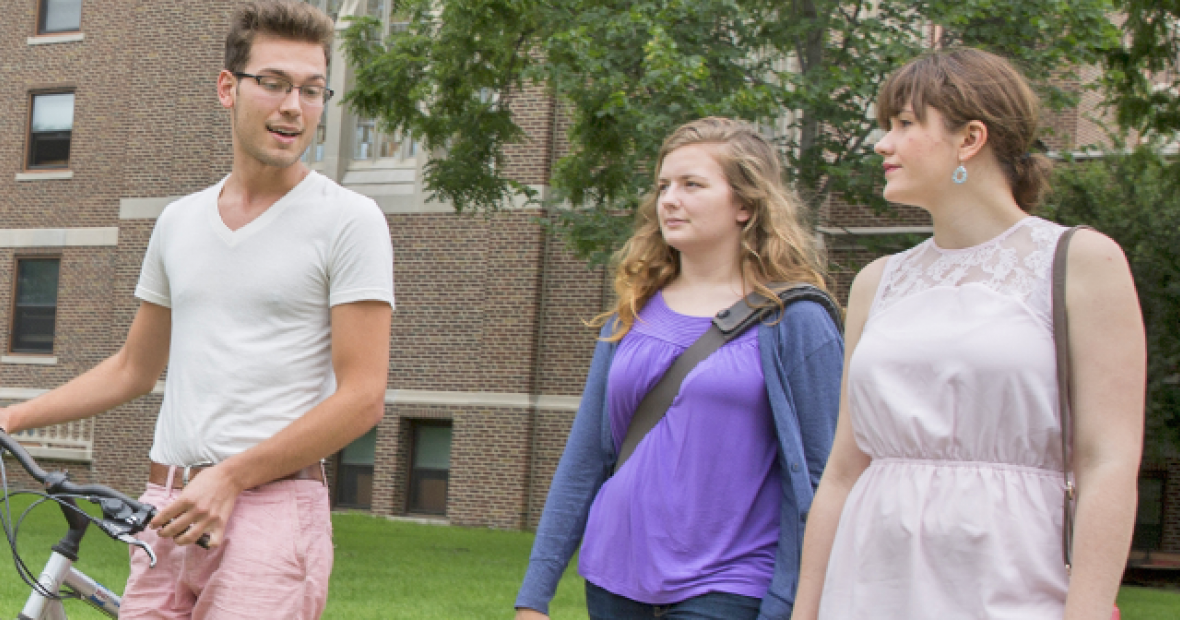 Choosing which colleges to apply to, filling out application forms, and figuring out financial aid—those aren’t easy tasks no matter who you are or where you’re from.

Those tasks can be even more stressful if your parents or guardians didn’t go through it themselves and you need them to fill out the FAFSA — the Free Application for Federal Student Aid.

If your parents or guardians don’t have a four-year degree, you’re considered a first-generation student by Grinnell College. Even if you have an older sibling who’s gone to college, you are still part of the first generation in your family to do so.

Why does it matter if you’re first generation?

Dan Davis ’16, a first-generation student and a QuestBridge National Match Scholar who earned a full, four-year scholarship to Grinnell, used to wonder the same thing. “Now I see how different it is. As first gens, we don’t know what we don’t know,” he says.

So we asked some fellow first gens for advice about navigating college.

Tip #1: Talk to Your Professors

Emma Lange ’16 says, “Learn how to talk to professors.” She’s found that it’s helpful to mention her first-gen status. “Not as an excuse or for pity points. It lets professors know where you’re coming from.”

Lange’s older brother, Andy Lange ’13, echoes that advice. “First gens sometimes tend to sit back and are more reluctant to go to professors’ office hours,” he says. “Break that awkward barrier your first semester. Make a connection with a professor. It sets the tone of the whole experience.”

Davis says, “Professors are the number one reason I love Grinnell.” He got a jump start getting acquainted with faculty his first year when he participated in the Grinnell Science Project. GSP helps first-generation, minority, and female students who are interested in math and science get a running start.

Stephen Sieck, associate professor of chemistry and a first-generation student himself, helps coordinate GSP. “We introduce students to what it takes to succeed in the sciences,” he says. “We help them develop relationships with faculty very early. This can be intimidating for first-generation students. There’s a stigma associated with talking to faculty for help, that it’s not a good thing. So we help them develop a strong relationship with a number of faculty, so students feel it’s not that big of a deal. We want to make students comfortable.”

First gens often think they have to do everything themselves.

Emma Lange’s best friend and roommate her first year was also a first-gen student. “We helped each other through a lot of first-year struggles,” Lange says. Her older brother, Andy, was a senior at Grinnell during her first year, so she was able to use him as a resource as well as his first-gen friends. “We formed our own little group of people that we knew we could go to for different issues,” she says.

“Adam suggested I take it from an English prof because the purpose of the tutorial is to learn more about college-level reading and writing,” Andy says. He took the  tutorial Dis Lit: Illness, Disability, and Contemporary American Life Writing with Ralph Savarese, professor of English. He loved it. “Adam steered me in the right direction,” he says.

“Don’t think it’s all on you,” Davis says. “I didn’t fall into the trap of not asking for help because I wanted to optimize whatever I could in my education.”

Tip #3: Be Patient with Your Parents and Yourself

Iulia Iordache ’15 is a first-generation student from Romania. “I always thought of myself as an international student first,” she says, “but the first-generation piece of it comes in with relation to my parents.

“Be patient with your parents,” Iordache advises. Trying to explain what she’s studying, especially the idea of the liberal arts, can be tricky.

As an international student, Iordache says she comes from a very competitive arena. “It’s hard to let go of those competitive feelings,” she says. “But it’s more productive to work with groups and mentors.”

If there’s something you really want to know or do at Grinnell, just ask.

Davis has spent many hours speaking with the Financial Aid staff. “I wanted to know where my money was going,” he says. “They’ve been very helpful and explain things step by step.”

Money is a common concern for first-generation students, who are often, though not always, high-need students too.

When Andy Lange considered studying in Germany for a semester, he was concerned about the cost. “I went to Financial Aid and said, ‘I really want to study abroad, but I don’t feel comfortable taking on more debt to do it.’ They encouraged me to apply to scholarships. I won two that made studying abroad no more expensive than a semester on campus.”

Emma Lange, Iordache, and Davis are working together in 2014–2015 to create more opportunities for first-generation students to fill in the knowledge gaps and get the most out of their Grinnell experience. Ideas they’re considering: a regular lunch meeting for first-gens; a textbook lending library; a mentoring program.

Grinnell students, alumni, faculty and staff who are or were first-generation college students are invited to join the Grinnell College First Generation College Students Facebook group.

Help for First Gens Before You Apply

Grinnell’s Diversity Preview Program offers a free, fly-in visit to campus each fall for domestic students who identify themselves as diverse in some way, including first-generation status. In 2013, about 150 students applied and about 50 students came, says Patty Amador-Lacson, assistant director of admission and coordinator of multicultural recruitment.

QuestBridge is another useful resource for first-generation students who are still in the decision phase. QuestBridge seeks high-achieving, low-income students and helps match them to colleges and universities. Grinnell is one of about 35 partner schools. The program assists students through the college application process and helps high school juniors with college visits.

In August each year, during the week before New Student Orientation, two programs run simultaneously that can benefit first-generation students. Both invite students to participate.

New Student Orientation is for all new students and is a great way to get acquainted with resources on campus.

Dan Davis ’16, a math major, hails from Wadsworth, Ohio. Emma Lange ’16, a political science major with a concentration in technology studies, is from Carroll, Iowa. Iulia Iordache ’16, who’s majoring in psychology and Russian, is from Bacoi, Romania.