Food as a Social Justice Issue 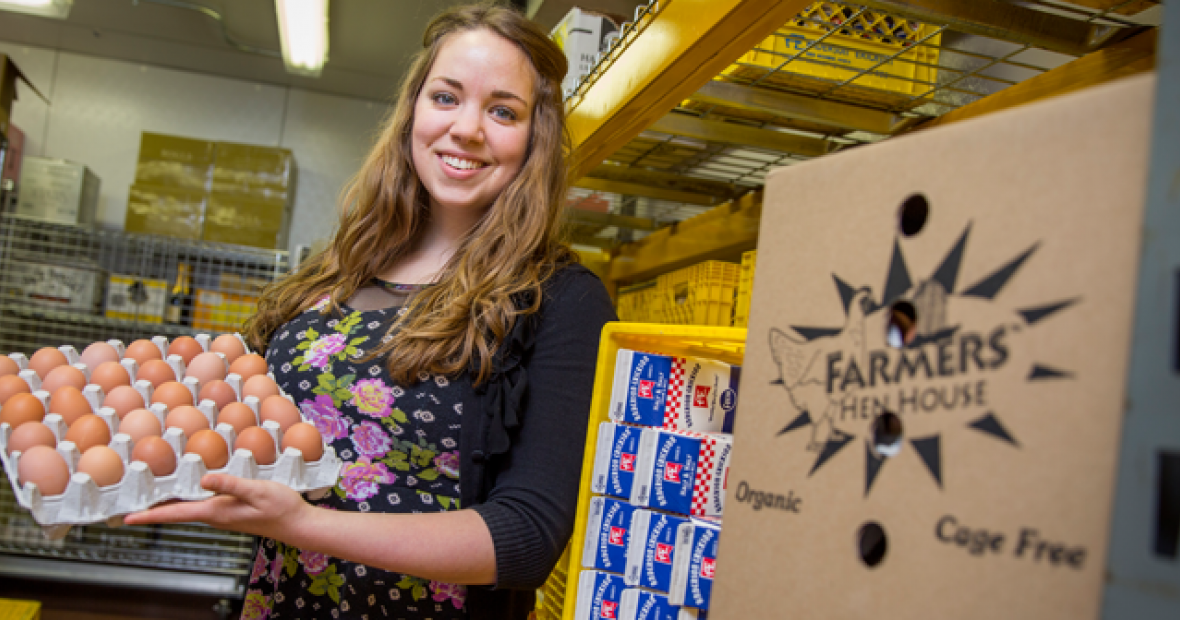 Saunter into the Marketplace, Grinnell’s student dining hall, swipe your P-card at the cashier’s desk, and grab a tray. It’s time for lunch.

It’s cold today, so how about some soup? Tomato or chicken noodle? A grilled cheese sandwich would go well with the tomato soup, plus a few fries. Or maybe the beef, garlic and broccoli stir-fry. For dessert, grab some fresh fruit if you’re feeling virtuous — the chocolate chip cheesecake bar if you’re not.

One thing you might not consider as you’re making your choices is where your food comes from.

Since high school, Madeline Warnick ’16 has been interested in sustainable foods. At Grinnell, she became active in social justice causes related to food, like Poweshiek CARES, a group of local farmers, citizens, and activists opposed to concentrated animal feeding operations, or CAFOs.

“I’ve been learning how the food movement connects to other social justice systems,” Warnick says. She also learned about the Real Food Challenge, a national organization that encourages college students to advocate for their schools to spend their food budgets on local and organic food sources.

Warnick’s personal and political interests intersected with her academic interest, and an independent study project was born. She set out to learn how much of Grinnell’s food budget is spent on local, organic, humane, and fair trade food.

She approached Dick Williams, director of dining services, about analyzing college food purchases. He was happy to assist.

To see how Grinnell spends its food budget, Warnick analyzed food purchases for two representative months, April and September 2013. She used the Real Food Challenge calculator, an online tool, to do the analysis. She spent months entering data.

Dining Services uses about 3,000 items in its recipes, and Warnick encountered about 2,000 of them in the invoices she analyzed.

“It’s so hard to find where your food comes from,” Warnick says. She researched products to determine if the vendors were within 250 miles of Grinnell, which meets the Real Food Challenge’s definition of local.

The college buys as much local produce it can, Williams says. This happens primarily in the fall due to seasonal availability.

People may assume it’s easy for Grinnell to make these changes, considering the college is smack dab in the middle of a farm state. But Iowa’s main crops are corn and soybeans.

Even if a product is local, it may be disqualified as “real food” on other grounds. The Real Food Challenge looks for food from sources that are local/community-based, fair, ecologically sound, and humane.

Part of Warnick’s research was to determine whether foods Grinnell purchased satisfied one or more of these other categories. Disqualifications include foods containing genetically modified organisms — GMOs — artificial color dyes, or partially hydrogenated oils.

Meat from CAFOs is disqualified because it’s not considered humane. Many consumers object to the treatment of animals in confinements, as well as to odors from the buildings and manure pollution in streams.

“My number one priority is getting away from CAFO meat,” Warnick says. However, she recognizes that price is a major obstacle to switching to organic meat.

The price of organic meat can be at least four times greater, Williams says. That would mean at least $150,000 more needed for the food budget per year, he says.

Warnick discovered that Grinnell sees room for improvement in Grinnell’s use of food that’s local, organic, humane, and/or fair trade.

It’s something that’s on Williams’ radar: “I want to investigate and see where we can contribute.”

Warnick hopes to form a working group with dining services staff and students to give input on purchases. Williams is open to the idea.