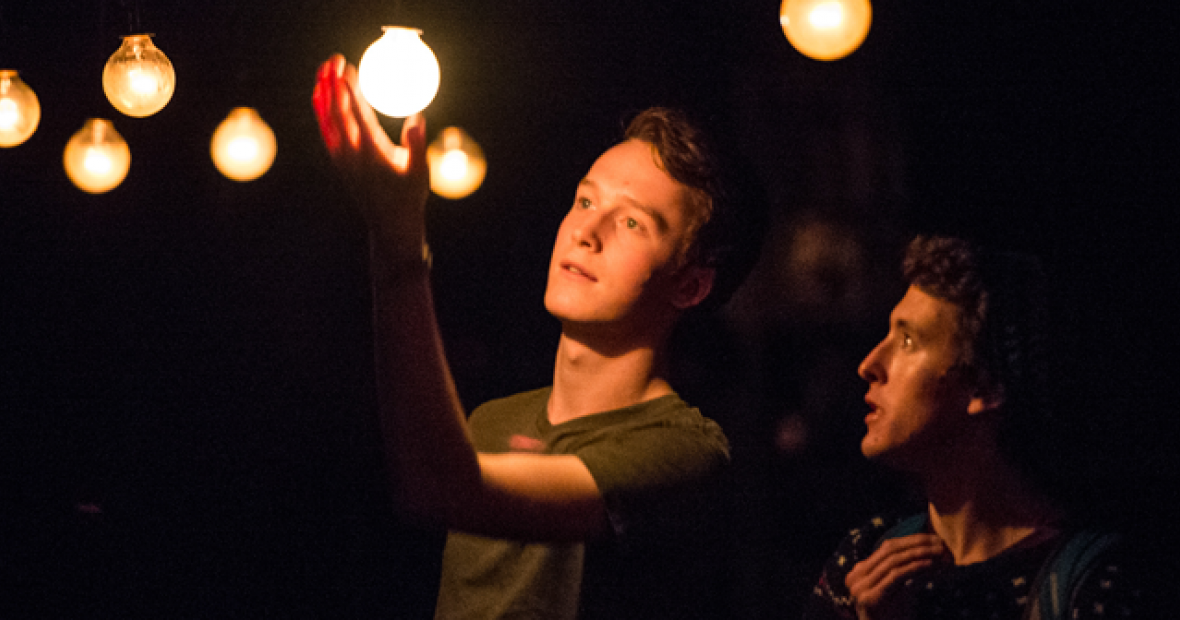 When they started working on their Mentored Advanced Project (MAP), Ben Doehr ’15 and Caleb Sponheim ’15 had no idea how moved some observers would be, by a display of lights, triggered by the viewers’ very presence.

Like so many Grinnell students, Doehr and Sponheim employed creativity, critical thinking, and individualized study in an attention-grabbing project supported by the College’s unique programs.

The pair shares an easygoing friendship, an enthusiastic collaboration, and a wry sense of humor. Last semester at Grinnell-in-London, they shared a flat, where the concepts for their current projects first germinated. 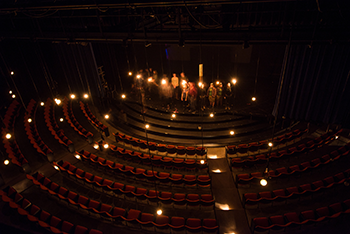 Caleb wanted to create a forest of lights in Roberts Theatre. He and Ben wanted people to be able to interact with the light display from the stage.

From concept to the March 2014 installation, their vision remained the same. Participants entered the darkened theatre, where Caleb led them to a line of dimly glowing light bulbs suspended at face height over the lip of the stage. As soft music played in the background accompanied by the sounds of crickets and flowing water, Caleb explained that the lights knew the participants were there, and that if they got close enough to them, the lights would respond.

When a participant reached out, nearly touching one of the hanging light bulbs, the bulb would brighten as a musical note rang through the theatre and a cluster of other light bulbs hanging at various heights over the seats would brighten before fading back into the darkness. Light sensors drove the display; when either of two cameras that monitored the space sensed a change in ambient light — brighter or darker — the lights would respond.

The faces of the participants, lit up with wonder and joy, were as compelling to watch as the twinkling bulbs in the theatre.

Caleb says, “People brought things in. They projected their emotions on the space.” It was the human element that brought the design to life. 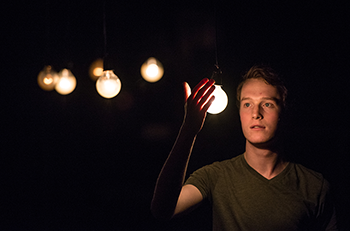 If you were to pigeon-hole the work, you could call it an art installation. It is the first of three projects, which all are part of a theatre MAP.

Interestingly, Ben and Caleb don’t have a theatre major between them.

Doehr is double-majoring in chemistry and economics; Sponheim majors in psychology.

The project gave them a chance to stretch, a common occurrence on a campus with such diverse academic and extracurricular offerings. “This is a good creative outlet for both of us,” says Caleb. “It helps break up a schedule of highly analytic thinking.”

The pair is planning two more installations in Roberts Theatre:

Each will offer a unique sensory experience and will allow for different ways to participate in the experience and interact with the space. Ben and Caleb didn’t disclose any details about their future installations, but if they’re anything like Light, they will be more than installations. They’ll be experiences.