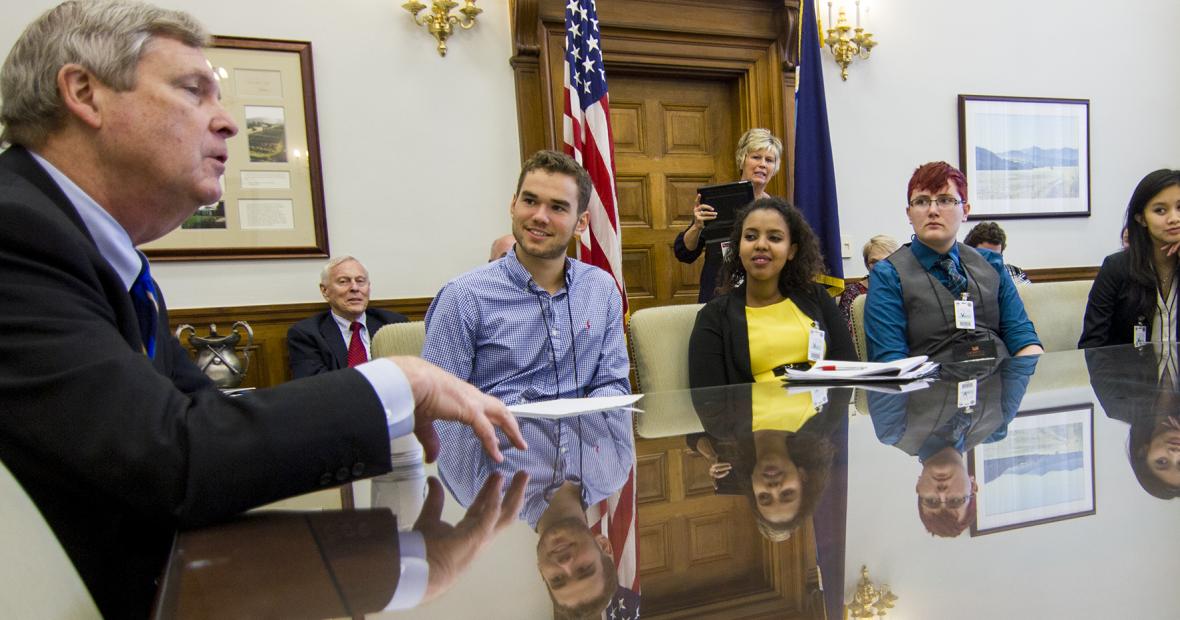 “I want to do foreign policy,” says Misha Gelnarova ’18, an international student from the Czech Republic who spent part of spring break in Washington, D.C., with the Rosenfield Program’s second annual industry tour. “Seeing it through the lens of the American side is really interesting.”

Gelnarova, an independent major in international relations and communications, was one of 20 Grinnell students, out of nearly 60 who applied, to participate in the policy-oriented industry tour March 29 through April 2. The trip helped students explore their interests in policy issues, network with alumni, and further their career goals.

“I loved the visit to Politico,” Gelnarova says. “It was easy to connect with the young alum [Ben Weyl ’07, formerly with Congressional Quarterly]. He talked about how he got internships through Grinnell — both were in D.C. and in journalism. Even though Grinnell doesn’t have [journalism as a major], he was able to find a job quickly.

“I have this idea that reporters are going to break your leg to get the story,” Gelnarova says. “[Weyl] was the most calm and peaceful and intelligent person. He talked about the relationships he’s got on the Hill. He’s able to engage with members of Congress in a very friendly manner. So this relationship is beneficial to both of them because they can say what they want and he has a firsthand source. It can actually work in a nice manner.”

Gelnarova is deeply interested in her home country’s international relations. While the Grinnell students were in Washington, D.C., the president of the Czech Republic hosted a visit from the president of China. “It seems to send a huge message since we’re such a small country and we’re having this very official visit,” Gelnarova says. “The whole Czech Republic transformed to welcome the Chinese with flags everywhere. This kind of shows how the Czech Republic is leaning toward the East rather than to the Western powers.”

During a visit with U.S. State Department alumni, Gelnarova presented her concerns to Aubrey Carlson ’82, director of the Office of Central European Affairs, including the Czech Republic. “I was wondering how he sees it,” Gelnarova says. “Does it degrade the Czech Republic in his eyes? He said they have great cooperation with the prime minister [the actual head of government]. They understand that the president [head of state] is leaning somewhere else than the republic and the people. So it kind of settles me down.”

The tour also included a visit with Tom Vilsack, U.S. Secretary of Agriculture and former governor of Iowa. He was going to give an overview of the USDA, Gelnarova says, “but he believes Grinnell students already know that, so we went straight to questions. It was pretty fantastic to see that he was really comfortable sitting down with us for an extensive amount of time [45 minutes] for a person in such a high position and just answer whatever we had to ask.”

Students were invited to alumni’s homes as well as meeting them in their workplaces.

“I feel like the whole alumni network at Grinnell is golden,” Gelnarova says. “They had the same experience in the middle of cornfields. Being able to interact with them and see that they are doing incredible stuff but also that they’re so approachable and so easy to connect with.”

The alumni presented policy as well as career issues. “You can watch today’s students imagining how they can get to different paths,” says Sarah Purcell ’92, director of the Rosenfield Program and professor of history.

Washington, D.C., is such a rich place with many alumni volunteers, Purcell says, that the Rosenfield Program’s third annual industry tour will return there in spring 2017 with a focus on technology and human rights.

Misha Gelnarova ’18 is from Ostrava, Czech Republic. Her independent major focuses on international relations and communications. Photos courtesy of Gelnarova.