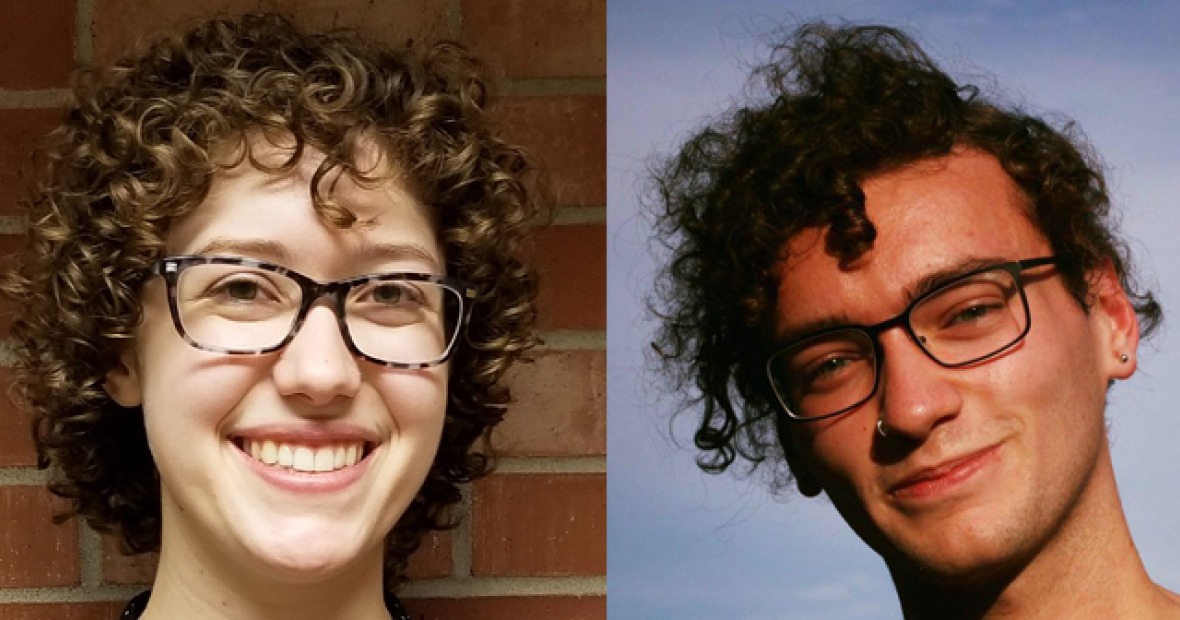 Rachel Bass ’19 and Timothy Burnette ’19 have received Honorable Mention recognition from the Barry Goldwater Scholarship and Excellence in Education Foundation.

Bass and Burnette are among 281 national recipients of honorable mentions and 211 scholarship recipients for the 2018-19 academic year. The scholarship program, honoring U.S. Sen. Barry Goldwater, was designed to encourage outstanding students to pursue careers in mathematics, the natural sciences and engineering.

Peggy Goldwater Clay, chair of the Goldwater Trust’s Board of Trustees, recently announced the recipients, who are second- and third-year students from across the United States. The Goldwater Scholars and Honorable Mentions were selected on the basis of academic merit from a field of 1,280 mathematics, science, and engineering students who were nominated by the institutional representatives of 455 colleges and universities nationwide.

Bass, a physics and mathematics major from Salem, Oregon, plans to pursue a Ph.D. in experimental particle physics. Her career goal is to conduct research in particle physics or accelerator science for a research or academic institution. Research with the Cornell-Brookhaven National Laboratory Energy Recovery Linac Test Accelerator team at Cornell University in summer 2017 under professor James Arthur Crittenden solidified and sharpened her future plans.

A Grinnell Trustee Honor Scholarship recipient and Dean’s List honoree, Bass will conduct research at the European Organization for Nuclear Research in Geneva, Switzerland, this summer. At Grinnell, Bass collaborates with physics professors Paul Tjossem and William Case on a mechanics research project. She also serves as a physics peer mentor, calculus tutor, science peer mentor, and a student leader in the dining hall.

Burnette, a biology major from Bedford, Virginia, plans to pursue a Ph.D. in ecology and evolutionary biology with a career goal of researching drought tolerance in plants and its importance in community structure. Burnette, who is studying abroad this semester in Denmark, also wants to teach at the university level and mentor future plant ecologists.

At Grinnell, Burnette serves as a biology writing mentor and a research assistant to Vince Eckhart, Waldo S. Walker professor of biology. Last summer they researched drought tolerance and its importance to plant community structure. Burnette will work this summer with Ecology and Evolutionary Biology Professor Katie Suding at the University of Colorado at Boulder, studying drought tolerance in xeric tallgrass prairies.

Burnette also has collaborated with Sharon Quinsaat, assistant professor of sociology, researching the experiences of low-income students at Grinnell College. In addition to founding the Low-Income Student Lending Library and initiating Social Class Awareness Week at Grinnell, Burnette is a QuestBridge Scholar and a Dean’s List honoree.

The Goldwater Foundation is a federally endowed agency established by Public Law 99-661 in 1986. The scholarship program honoring Senator Barry Goldwater was designed to foster and encourage outstanding students to pursue careers in the fields of mathematics, the natural sciences, and engineering. The Goldwater Scholarship is the premier undergraduate award of its type in these fields.