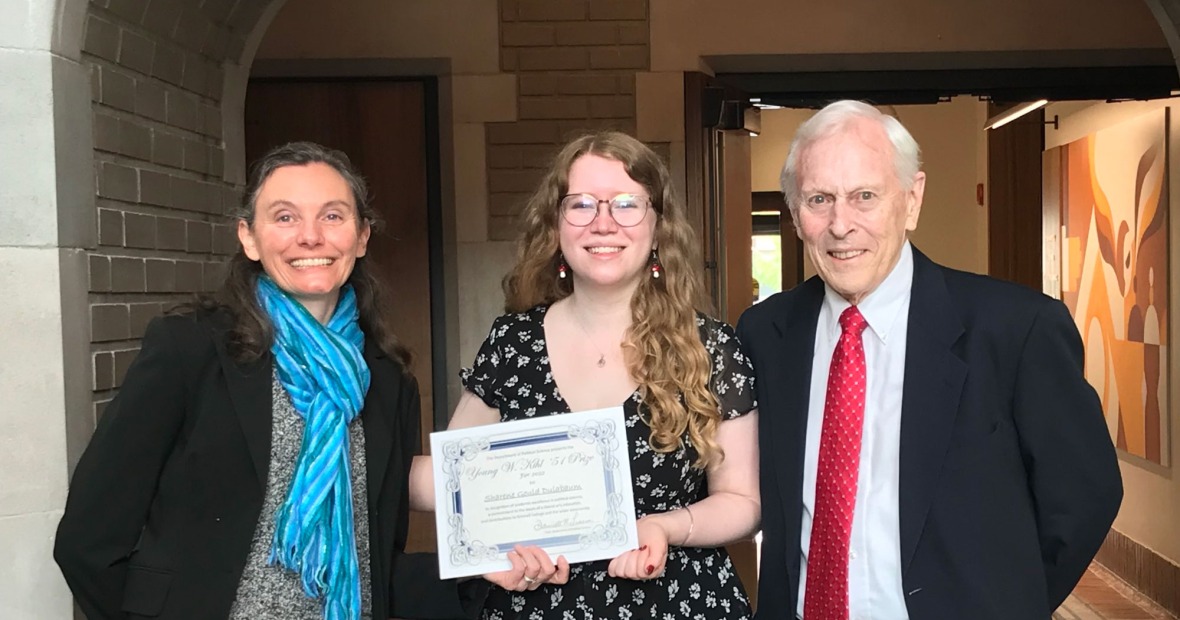 Sharene Gould Dulabaum ’22, winner of the Young W. Kihl Prize, receives a certificate from Professor Danielle Lussier, chair of the Department of Political Science, and her advisor, Professor Wayne Moyer.

The Kihl Prize is an annual, competitive award that honors an outstanding senior political science student who has:

Gould Dulabaum was a member of the Student Educational Policy Committee (SEPC) for the environmental studies concentration, as well as the Student Environmental Committee and the Center for Prairie Studies advisory board. She also won the SPARK Social Innovation Challenge with her proposal to improve sustainability on campus via waste reduction.

“Sharene’s strong commitment on environmental issues already stood out in my 2018 first-year tutorial,” explains Professor Wayne Moyer, who advised Gould Dulabaum for the political science major. “She is an environmental activist, always looking for things that she can do to make the campus a better place. She is also a wonderful student, [and was] a delight to have in class.”

Gould Dulabaum, who was a Dean’s List stalwart, double majored in political science and biology. She recommends a major in political science to other Grinnellians because it will help them to “understand power,” which she believes is “crucial for navigating and making sense of the world around you, no matter what your focus is in life.”

Gould Dulabaum takes with her many fond lessons from political science, including being a lawyer on a mock court case in Professor Peter Hanson’s Constitutional Law & Politics (POL-219), the game theoretic exercise on collective action problems in Professor Barry Driscoll’s Political Economy of Development (POL-354), and developing a ‘grand theory’ of the causes of democratic backsliding in Professor Sheahan Virgin’s Democratic Decline in the U.S. (POL-395).

With this stage of her Grinnell journey complete, Gould Dulabaum will next intern at an ecological research site, the Cedar Creek Ecosystem Science Reserve, which is a part of the National Science Foundation’s Long-Term Ecological Research (LTER) network; in this role, she will focus on the way in which human activity affects ecosystems. Afterwards, she plans to study at the graduate level, likely an interdisciplinary master’s program in environmental science and public policy.

The Department of Political Science thanks Gould Dulabaum for the positive impact she has made while a student at Grinnell and wishes her well in her future endeavors.