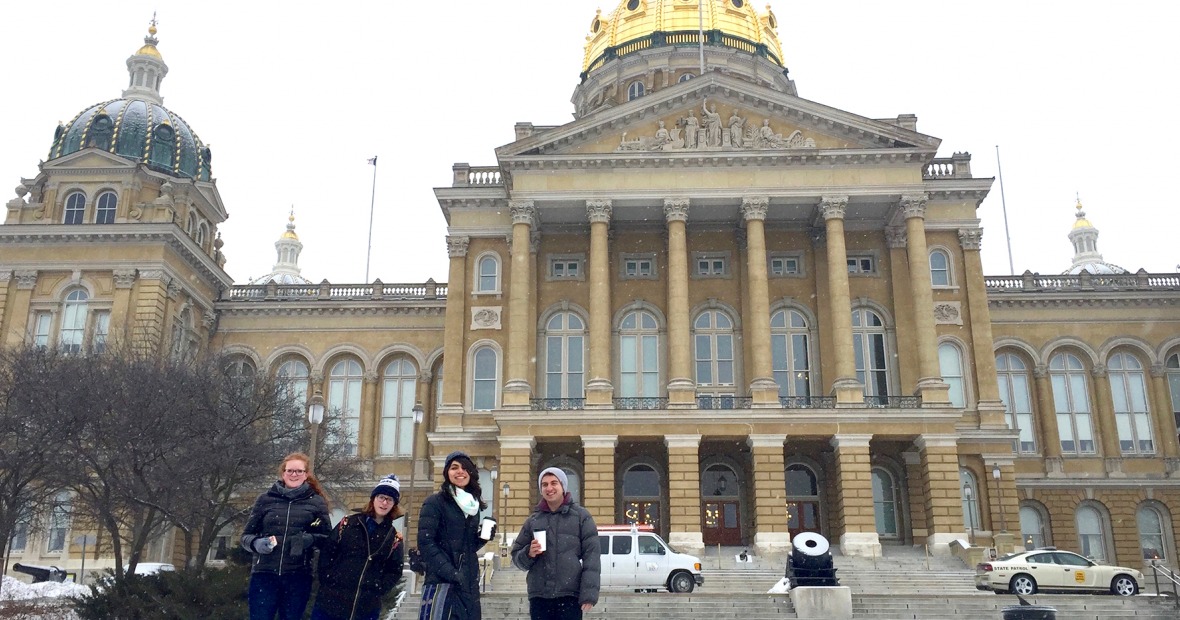 As a first-year Grinnell College student, Suha Gillani ’16 interned for Barack Obama’s campaign. But until taking a short course in January, she had no idea how distinctive and important Iowa is to the presidential selection process, and how the nature of Iowa and Iowans shape the caucuses.

Gillani, an international student from Pakistan, was one of 13 Grinnell students, including 2 from outside the United States, who got an up-close and personal view of presidential candidates campaigning across Iowa during the Grinnell Caucus Project.

During the weeklong, immersive class about the first-in-the-nation Iowa caucuses, the students traversed 1,525 miles and visited a good portion of the state, attending presidential campaign events featuring one Democratic candidate, three Republican candidates, and a former president. The course wrapped up about 2 weeks before the 2016 Iowa caucuses.

Before coming to Grinnell, the only political event Caleigh Ryan ’17 had attended was a huge Obama rally in Chicago. But during the course, she and her fellow students listened to Chris Christie give his stump speech in northwest Iowa, noted how Marco Rubio courted voters at a town hall in Ottumwa, and stood shivering in the snow to catch a glimpse of Donald Trump as he left a rally in the John Wayne Birthplace Museum in Winterset.

They watched Hillary Clinton, accompanied by singer Demi Lovato, reach out to young voters at the University of Iowa in Iowa City and saw former President Bill Clinton urge Fort Dodge voters to caucus for his wife because of her experience and achievements.

The course gave Caitlin Scaife ’16 a new appreciation for Iowans’ role in selecting a president, a role that many non-Iowans scoff at and many Iowans take for granted.

“Before taking this course, I don’t think I ever fully realized how important Iowa is in the presidential selection process or how much work goes into the Iowa caucuses,” Scaife says. “This week we’ve met citizens who have gone to several candidate events in order to make their decision.”

Leaving Personal Politics Behind for a Week

To participate, Scaife and her classmates had to apply for admission and meet the prerequisite requirements: Political Parties and The Presidency courses, both taught by Barbara Trish, professor and chair of political science, who designed and taught the two-credit caucus course.

The course textbook was What It Takes: The Way to the White House by Richard Ben Cramer. The 1,000-page tome about the 1988 presidential election explores candidates from George Bush and Robert Dole to Michael Dukakis and Gary Hart.

The class was structured to get the students out to candidate events, says Trish, who insisted that her charges suspend their personal political beliefs for the duration. “But perhaps more important,” she says, “was to show them that if you dig beneath the surface a little, there’s fascinating work and other aspects of life to uncover related to the caucuses.”

The national sales manager of KCRG-TV in Cedar Rapids discussed trends in political advertising. The vice president of marketing of Pizza Ranch, an Iowa-headquartered restaurant chain with a faith-based mission, explained the context for the key role its franchises play in hosting GOP candidates on the campaign trail.

They gained insights into fundraising and get-out-the-vote efforts from the founder of Campaign Headquarters, a call center in Brooklyn, Iowa, that promotes conservative candidates, including Ted Cruz. And they explored the role of PACs in the Iowa caucuses with Rob Barron ’02, political director of NextGen Climate, which advocates policies to prevent climate disaster and to promote prosperity for all Americans.

Megan Settle ’16 documented the course in a series of three photo blogs that show firsthand what the students saw and experienced.

Appreciating How Iowans Participate in Democracy

The students’ main takeaway was an awareness of how tightly the caucuses revolve around Iowa trademark retail politics. Ryan was shocked to learn firsthand that it’s common to see Iowans talking face-to-face with presidential candidates in town halls with fewer than 100 people.

“I think most voters in the country have no idea what a different experience of democracy Iowans enjoy,” she says.

Yanling Xu ’16, an international student from China, noticed that the spectacle of candidates talking in such close proximity to voters revealed a commonality Iowans have with Grinnell students.

“Iowans are as passionate as we are about politics,” she says. “Their questions are sharp and interesting.”

Hearing the candidates speak about how vital Iowans are to the process was energizing and inspiring to Hannah Boggess ’18.

“Candidates and Iowans respect Iowa’s first-in-the-nation status,” she says. “And it’s really incredible that we get to be a part of this unique and important piece of the political process.”

This course was funded by the Wilson Program whose mission is to nurture among our students a critical understanding of leadership and innovation as well as the skills associated with these.

Image of students in front of the Iowa State Capitol courtesy of Megan Settle.

Suha Gillani ’16 is a political science and economics major from Karachi, Pakistan.

Caleigh Ryan ’17 is an English major from Oak Park, Ill.

Caitlin Scaife ’16 is from Rochester, Minn., and is a political science and gender, women’s, and sexuality studies major.

Megan Settle ’16 is a political science and Spanish major from Raymore, Mo.

Yanling Xu ’16 is from Xiamen, China, and a political science major.

Hannah Boggess ’18 is a gender, women’s, and sexuality studies major from Minnetonka, Minn.