During the 2021 commencement ceremony, Grinnell College will award honorary degrees to the following individuals making major contributions to the fields of science, humanities and social science.

This year's commencement speaker, Kesho Scott, is an internationally renowned diversity consultant, award-winning writer, and associate professor of American studies and sociology at Grinnell College. As an educator, Scott values teaching students to be subjects of their own education. Her classrooms are active places and safe spaces where she challenges students to become thought leaders and to spread positive influence for social justice on campus and beyond. She will receive an honorary doctor of social science degree.

As the senior vice president for programming and audience development for NPR, Anya Grundmann ’89, oversees NPR's industry-leading podcast portfolio with 150 million monthly global downloads, in addition to NPR Music, NPR Events and NPR's entertainment and talk radio programming. Grundmann has been recognized with numerous awards, including being named to Billboard magazine's top women in music three years in a row, and Billboard Power 100. She will receive an honorary doctor of humane letters degree.

Sarah Hake ’75 is an American plant developmental biologist and the director for the U.S. Department of Agriculture Plant Gene Expression Center. Hake uses genetics to study plant development and has made significant contributions to plant science though the cloning of Kn1. Hake also currently serves as an adjunct professor in the Department of Plant and Microbial Biology at the University of California, Berkeley. She will receive an honorary doctor of science degree.

Mardele Simmons Early a devoted educator, is the founding chief executive officer of Lake Forest Charter School in New Orleans. In her 45-year career, Early is a firm believer in nurturing the mind, body and spirit of children of all ages. An excellent communicator, she is often sought after as an expert in instructional leadership and educational administration. The pillars of Early’s leadership are high expectations, high achievement, high accountability and data-driven curriculum alignment. It is this philosophy that has driven her administration and led to a career that personifies educational success. She will receive an honorary doctor of social science degree. 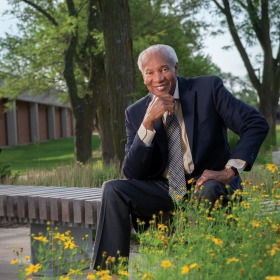 Internationally renowned opera star and humanitarian Simon Estes began his opera career in the 1960’s. He has sung at most of the world's major opera houses as well as in front of presidents, popes and celebrities. He was notably part of the first generation of black opera singers to achieve wide success and is viewed as part of an instrumental group of performers who helped break down the barriers of racial prejudice in the opera world. Estes has established the Simon Estes Educational Foundation which has awarded over one million dollars in merit-based college scholarships. The Simon Estes International Foundation for Children in Switzerland was established in 1993 and has saved lives by providing support for child health needs in Switzerland and Bulgaria. He will receive an honorary doctor of humane letters degree.

Grinnell College will host an in-person, outdoor Commencement ceremony for graduating seniors at 10 a.m. Friday, May 28, 2021 at Rosenbloom Field. The College will allow 2021 graduates to invite two guests to the ceremony. We will not be able to invite community members, faculty, staff and first- through third-year students to attend this year's commencement unless they have been invited as one of our graduates’ two guests. The ceremony will be available via livestream so that everyone can share in celebrating our graduates' tremendous accomplishments.