Four new trustees have been elected to Grinnell College's governing board, which meets formally three times during the academic year. The new trustees will attend their first board meeting Sept. 29–Oct. 1, 2022.

The new Board of Trustees members are:

“I’m thrilled to welcome the four new trustees to the board,” says Board Chair Michael Kahn ’74. “They have achieved incredible results in their respective fields, and they will each strengthen the board with their distinct experiences. Grinnell College has long identified a diverse community as one of its core values, and the board is deeply committed to having a diverse range of identities and perspectives in its membership.”

Guzmán and Serunjogi will be the youngest members on the board. The inclusion of young alums as Trustees was brought up in 2021 during a series of Young Alumni Listening Sessions with President Anne F. Harris.

“One of the many takeaways of those sessions was that young alums felt that their priorities for Grinnell could be further considered by the Board,” Harris says. “This was a point well taken and was part of an intentional recruitment of young alums. Graciela and Ham bring expertise and experiences that will provide welcome perspectives to the work of the Board, which will greatly benefit from the insights and engagement of all four new trustees. I’m looking forward to collaborating closely with all the new board members in the years ahead.”

Here’s a more detailed look at each new Trustee: 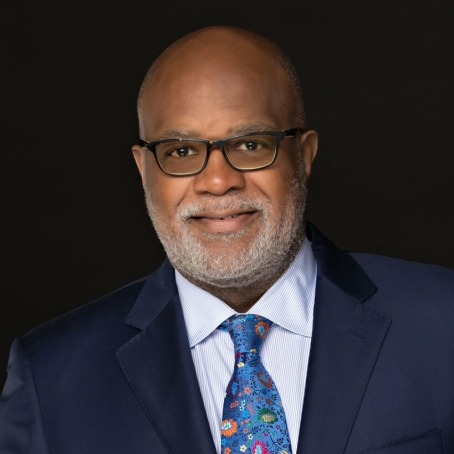 Jon R. Gray graduated from Grinnell College in 1973 with a Bachelor of Arts degree in American Studies. After Grinnell, he graduated from the University of Missouri-Kansas City (UMKC) School of Law in 1976, where he was Chief Justice of the UMKC Moot Court Board and Chief Justice of the UMKC Student Court. In 1986, Missouri Governor John Ashcroft appointed Gray, then 35, to the 16th Judicial Circuit of Missouri as a Circuit Judge. He was retained in office by voters for four additional terms over the next 20 years. Gray presided over civil, criminal, and family court matters. He retired from the bench in 2007 and on the same day, began his current position with the international litigation firm of Shook Hardy & Bacon LLP as a partner in its Kansas City office. He offers mediation and arbitration services to parties involved in civil disputes.

While attending Grinnell, Gray participated in theatre, athletics, was a member of Concerned Black Students, and received the President’s Award for his role in the Grinnell College Black Arts Ensemble. His involvement and service to Grinnell continued after graduation. He has served as a member of the Alumni Council, an admission volunteer, and a speaker for the Wilson Center.

Gray’s passion and commitment to philanthropy and community service are evident in his nonprofit board service, which includes the Greater Kansas City Community Foundation, the Health Care Foundation of Greater Kansas City, Swope Community Enterprises, the Lyric Opera of Kansas City, Truman Medical Centers, the Spofford Home for Children, the Kansas City Neighborhood Alliance, the Urban League of Greater Kansas City, the UMKC Law Foundation, the Kauffman Center for the Performing Arts Ensemble Group, the Kansas City Repertory Theater and the Shook, Hardy & Bacon Foundation. His statewide service includes gubernatorial appointments to the Jackson County Sports Complex Authority and the Missouri Citizens’ Commission on Compensation for Elected Officials. He is a life member of the NAACP and of Theta Boule’ of Sigma Pi Phi Fraternity. 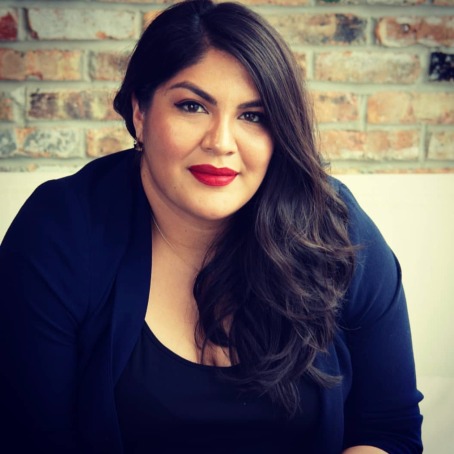 Graciela Guzmán graduated from Grinnell College in 2011 with a Bachelor of Arts degree in anthropology. Guzmán was a Posse Scholar and deeply involved in a wide array of extracurricular activities, including the Organization of Latinos/as, Concerned Black Students, Multicultural Leadership Council, Grinnell Singers, and Queer People of Color. She currently serves as the director of policy and advocacy at Aunt Martha’s Health & Wellness, a nonprofit organization serving over 105,000 children and adults in more than 600 Illinois communities. The organization provides primary and family health care, including behavioral health, pediatrics, family planning, parent support, and women’s health. She previously served as campaign director for the Healthy Illinois Campaign, a statewide coalition committed to fighting for health care for all people in Illinois, regardless of their immigration status.

Guzmán’s passion for health care, community, and helping others grew out of her family’s experiences immigrating to the United States from El Salvador to escape the Salvadoran Civil War and their experiences navigating services as a multi-immigration status family on public benefits. Guzmán’s interest in health care for all, immigration, racial equity, and an overall vision of a better Illinois for disenfranchised communities has led her to participate on the boards of the Chicago Women’s March, New Leaders Council Chicago, Health and Medicine Research Policy Group, and ACA Consumer Advocacy.

Guzmán was active in many organizations, clubs, and events while a student at Grinnell; upon graduation, she continued to serve the College as a member of the Alumni Council, her Reunion Committee, as an admission volunteer, and as a member of the Multicultural Alumni Reunion Committee. Guzmán received the Pioneer Alumni Award in 2017, which recognizes and celebrates noteworthy young alumni for their achievements within 10 years of their graduation. 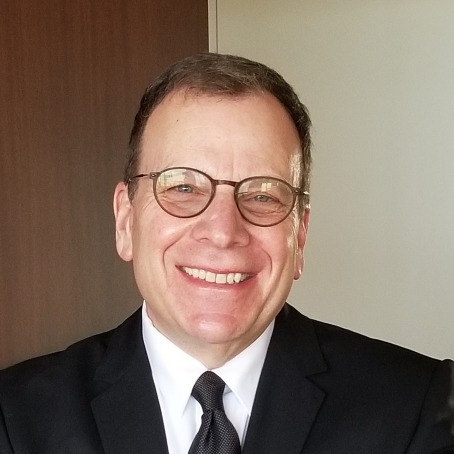 Bruce Koff graduated with a Bachelor of Arts degree in Russian and political science from Grinnell College in 1975. Following graduation, he earned a master’s degree in social work from the University of Illinois-Chicago.

A lifelong Chicagoan, Koff has been a leader and innovator for LGBTQI+ issues throughout his 40-year career. An advocate for professional standards of clinical mental health practice with the LGBTQI+ population, Koff has trained countless clinicians, taught at the University of Chicago’s School of Social Service Administration and is co-author of the book, "Something to Tell You: The Road Families Travel When a Child Is Gay." He also initiated the first post-graduate certificate program in the nation on clinical practice with LGBTQI+ individuals and families.

He was the first paid executive director of Horizons Community Services (now Center on Halsted), the LGBTQI+ community center in Chicago. He is also co-founder and former COO of Live Oak, Inc., a LGBTQI+-affirmative and trauma-informed counseling/psychotherapy organization that also provided specialized training for other mental health professionals and social service agencies.

Koff retired in 2018 and currently serves as Vice-Chair of the International Board and Chair of the U.S. Board of Rainbow Railroad, a global organization assisting LGBTQI+ individuals fleeing persecution and violence.

Koff has been inducted into the City of Chicago LGBT Hall of Fame and is a recipient of the Center on Halsted Human First Award, the Grinnell College Alumni Award and the Distinguished Contribution to Social Justice Award from the American Family Therapy Academy.

While attending Grinnell, Koff was a member of the Grinnell Singers and GCGC (the Grinnell College Gay Community). After graduation, he served as co-president of the Alumni Council from 1997–98.

In 1982, Koff met his spouse, interior designer Mitchell Channon. Channon is also a Grinnell grad, class of '82. Like Koff, Channon is a lifelong Chicagoan. He received a bachelor’s degree in fine arts and a master’s degree in architecture from the University of Illinois-Chicago. 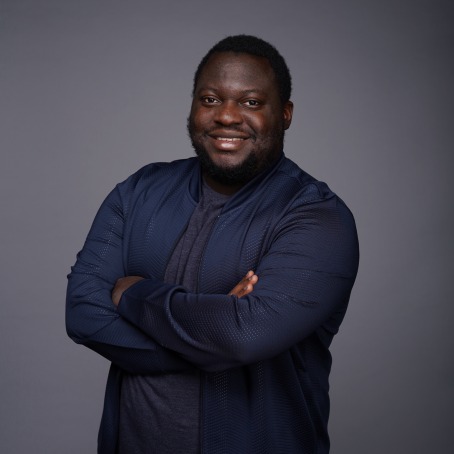 Originally from Uganda, Ham Serunjogi graduated with a Bachelor of Science degree in economics from Grinnell College in 2016. While attending Grinnell, he was a member of the swimming and diving team, active with AppDev, and he gained valuable business experience as the Student Government Association Treasurer. In that role, he oversaw a $500,000 annual budget and managed a payroll for 100 student employees.

After graduation, Serunjogi moved to Dublin, Ireland, where he led Facebook’s partnerships with some of its larger clients in Europe. He left that job in 2018 and moved to the San Francisco Bay Area to work full time as the CEO of Chipper Cash, a venture-capital–backed financial technology company that he co-founded with fellow Grinnell graduate Maijid Moujaled ’14. Both had the desire to make a positive impact on their home continent of Africa by leveraging technology and entrepreneurship. They were also both part of the team that launched Pioneer Weekend, an annual innovation and pitch competition which they have continued to support with a $50,000 grant via the Ham Serunjogi and Maijid Moujaled Fund for Entrepreneurship.

Launched in 2018, Chipper Cash builds software to enable free and instant cross-border peer-to-peer money transfers and personal investment, as well as solutions for businesses and merchants to process online and in-store payments. It offers mobile-based, no fee, P2P payment services, and is present in nine countries: Ghana, Uganda, Nigeria, Tanzania, Rwanda, South Africa, Kenya, the United Kingdom, and the United States. The company has received funding from Ribbit Capital, Jeff Bezos, and Hall of Fame quarterback Joe Montana to name a few.

In total Chipper raised over $300 million and is widely considered one of the most valuable startups in Africa valued at over $2 Billion. At last count, Chipper employed about 15 Grinnell graduates as full-time employees or interns, as part of its 400+ global employee base.

The Board of Trustees also voted to re-elect five trustees to new terms:

In addition, Robert Gehorsam ’76, a resident of New York City, has been elected Alumni Council president for 2022–23 and will serve as an ex-officio trustee during his term.

After many years of service, Trish Fitzgibbons Anderson ’80 and David Braman ’75 have retired from the Board of Trustees.

The role of the trustees is to assure the “great and lasting good” of Grinnell College. Through their commitment to institutional stewardship, shrewd financial investments, and prudent management, the trustees have enabled Grinnell to become a leading liberal arts college noted for its rigorous academics, diversity, community, and commitment to exploring issues of justice on campus and beyond. Learn more about Grinnell College Board of Trustees.