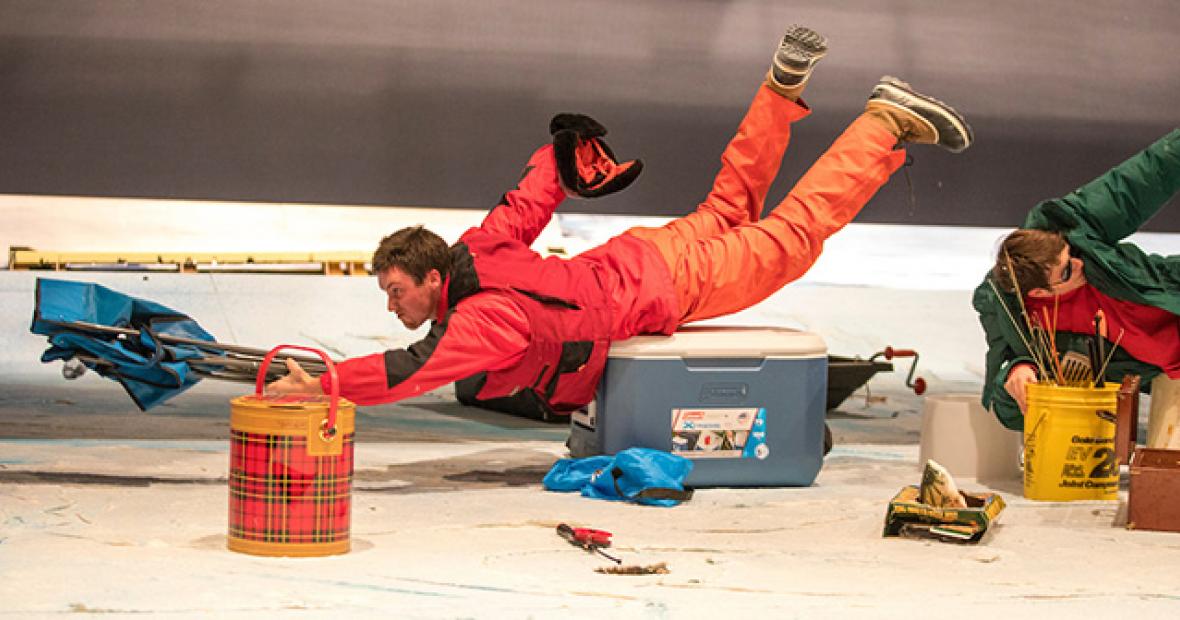 This October, Grinnell College students formed the cast and crew of the first-ever amateur production of Nice Fish. The play was directed by Ellen Mease, associate professor of theatre. It is based on the prose poems of Louis Jenkins and co-written by Jenkins and Academy and BAFTA-award winner Mark Rylance. This year, it was nominated for an Olivier Award for Best New Comedy.

Nice Fish centers on two ice fishermen on a frozen Minnesota lake — one an expert, the other a goofy novice. While out fishing, they are visited by a woman named Flo, a spear fisherman, and a DNR man. The play was performed in Grinnell College’s Roberts Theater on Oct. 6, 7, and 8. It was preceded on its opening night by a poetry reading by Jenkins.

Grinnell was chosen for the performance, in part, because it provides the ideal audience for Nice Fish. Jenkins and Rylance knew they wanted the play performed for liberal arts students who could “appreciate the wry humor of [Jenkins’] poems and the wild ice antics Rylance has created for the players,” writes Mease. Both of these things are especially well appreciated in a liberal arts college located in the Midwest.

Rylance lived in Milwaukee, Wis., for nearly a decade and Jenkins has spent much of his life in Duluth, Minn. Consequently, the play’s humor draws heavily on Midwestern tropes. It features colorful characters, polka music, the bitter Minnesota winter, and, of course, fishing.

Jenkins has a special connection to the College. In 1994 he was invited to campus by Scott Newstok ’95 to do a poetry reading (Jenkins had been Newstok’s school librarian). The two were reunited when Newstok introduced the poet on Nice Fish’s opening night. Jenkins is also an old friend of director Mease.

Grinnell’s student actors rose to the challenge of putting on the first amateur production of the play. They adeptly embraced its absurdity: Joseph Robertson ’19 (Ron) danced around brandishing a singing Billy Bass, Liam Stowe ’18 (Wayne) delivered a fatherly lecture to a bait that has yet to catch a Nice Fish, and Christina Collins ’21 (Flo) delivered a touching (and unexpected) musical performance. At the end of the play, Reed Roffis ’18 (Erik) cradled a mechanized rubber pike — his Nice Fish — before gently letting it slip back into the lake, and David Gilbert ’21 (DNR Man) popped out of a hole in the ice like a walrus. All students performed their roles with equal parts heart and whimsy.

The Nice Fish performance this fall speaks to many things that are special about the College — its excellent theatre facilities, the long-lasting relationships formed between professors and students, the thoughtful and quirky nature of its student body, and its unique location in the heart of the Midwest.