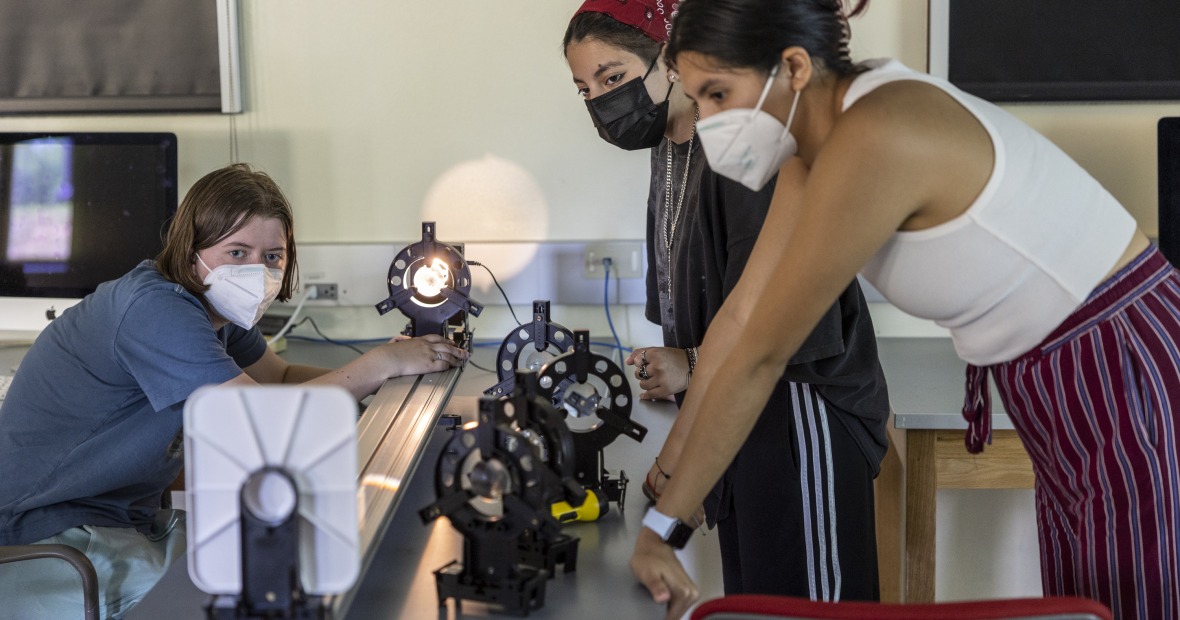 Zoe Gonzalez ’23, Jamie Lee ’23, Jennifer Lopez ’23, and Budhil Thijm ’25 sit cross-legged under a stairwell in the basement of the Noyce Science Center, illuminated only by the glow of a trio of vending machines.

“We have about 15 minutes until they find us,” Gonzalez whispers. They’re awaiting discovery by participants in the Grinnell Science Project (GSP) pre-orientation program, currently racing through Noyce on the program’s annual Scavenger Hunt.

The participants — self-dubbed “GSPers” — gather clues from faculty and staff stationed throughout the building and, in the process, learn the locations of important academic resources. Gonzalez and the other student assistants (SAs) are gathered at another essential site: the vending machines.

The vending machines are subtle contributors to the goal of GSP, ensuring that first-year students from backgrounds underrepresented in the sciences feel confident as they take on Grinnell’s science curriculum.

In the early 1990s, science faculty developed the Grinnell Science Project to encourage students interested in STEM — particularly students of color, women, and first-generation college students — to stick with the sciences. Data showed that many students were stepping away from the science curriculum after struggling in introductory courses, but this trend didn’t correlate with academic ability; rather, the barriers to success were largely environmental and social.

Out of these findings, GSP was born. This fall marked the 30th anniversary of the program, designed to help students acclimate to college life, gain confidence, and establish community and networks of support. During a pre-orientation week, GSPers participate in mock classes, office hours, and laboratory experiences. They learn the landscape of the sciences at Grinnell and methods of scientific inquiry. Throughout the year, they’ll reunite to swap knowledge, offer support, and further develop academic skills.

Above all, they’ll bond.

GSP gives people confidence in the autonomy they have as a scientist,” explains GSP Guest Director Maisha Kamunde-Devonish, assistant professor of chemistry. “GSP shows students — if being a scientist is what you want, that is what you can be. That is what you are.

Each year, SAs like Gonzalez are the backbone of GSP. Having participated in the program themselves, they return in August to mentor a new cohort of GSPers. Their work stretches around the clock. When not leading GSP activities, the SAs dine with GSPers, host recreation events, play countless games of late-night UNO, and even exercise with the students as they learn to navigate the Fitness Center.

The way the SAs see it, GSP’s success empowering first-year science students relies on the strength of the relationships they form with upperclass mentors. Jamie Lee has been an SA for three years. “Students still reach out to me and text me and say, ‘Hey! I’m thinking of studying this … ‘ or ‘What classes did you absolutely love?’” For Lee, it’s a sign that the SAs have done their job well.

During their first year on campus, GSPers live in clustered housing on campus — sharing a residence hall with many of their GSP peers as well as other students. Student Assistants can elect, and often do, to live in these residence halls alongside their GSP mentees. Even after pre-orientation, this coexistence continues to foster community, dialogue, and relationships. As a four-year GSP veteran, Gonzalez knows how strong those relationships are. “GSP is where I met my family at Grinnell,” she says. “GSP means family.”

We are here because we want to be here, because we’ve been in their shoes before," says Kyla Pereles ’25. "Because we love what we’re doing, and because we think it’s important.

In conversations with every GSP participant, director, and SA, it is clear: The essence of GSP is community. And that community wouldn’t exist without the SAs who choose to return each year.

Kyla Pereles ’25 vividly remembers her own GSP experience in a mock Organic Chemistry II lecture. Pereles took notes — hesitantly at first, and then with increasing confidence. “The experience made me realize that even if I felt I was being thrown off the deep end, I could still tread water and get the hang of things,” she recalls. This realization is one of the primary objectives of GSP — directors want students to recognize their capacity for success as a scientist, despite challenges and doubts. For the SAs, such confidence has continued to grow as they’ve returned to the program.

“Since coming to college, I’ve dealt with a lot of imposter syndrome,” Gonzalez says. “But I feel a lot firmer in where I stand now. I tell GSPers, ‘You are a scientist regardless of how well you feel you’re doing.’” It would be hypocritical, she says, not to believe it herself.

GSP cultivates empowerment by guiding students toward common ground. “In white-dominated or male-dominated spaces like a lot of science academia, it’s easy to brush away microaggressions and experiences because no one else can relate,” Lee explains. “But in the GSP community, I’m surrounded by a group of people that can validate my feelings and experiences.” That affirmation, Lee reports, has had a big impact on her academic experience.

With the arrival of this year’s GSP cohort, more than 1,100 students have participated in the program. Whether they attended in 2000 or 2022, many of them experienced the same activities and events — traditions that further develop community. While the SAs value these shared experiences, they also have clear visions of the future Grinnell Science Project and what it might mean to be a GSPer.

Recently, SAs and directors have begun encouraging GSPers to serve as ambassadors to the larger Grinnell science community. “We are now trying to foster the idea that you should take the resources you learned about in GSP and you should share them,” Lee explains. Gonzalez, Lee, Lopez, Pereles, and Thijm envision a framework in which GSPers use the pre-orientation experience as a tool to help both themselves and others throughout their time at Grinnell.

Though only a handful of GSPers from this year’s cohort will return as student assistants, every participant will go forth as an ambassador in the sciences, sharing resources while promoting empowerment and inclusion. They will become new nodes in the ever-expanding network of the GSP community, a family both ephemeral and bound by common experience.