Grinnellians Go Forth with a Different Sort of Pomp and Circumstance 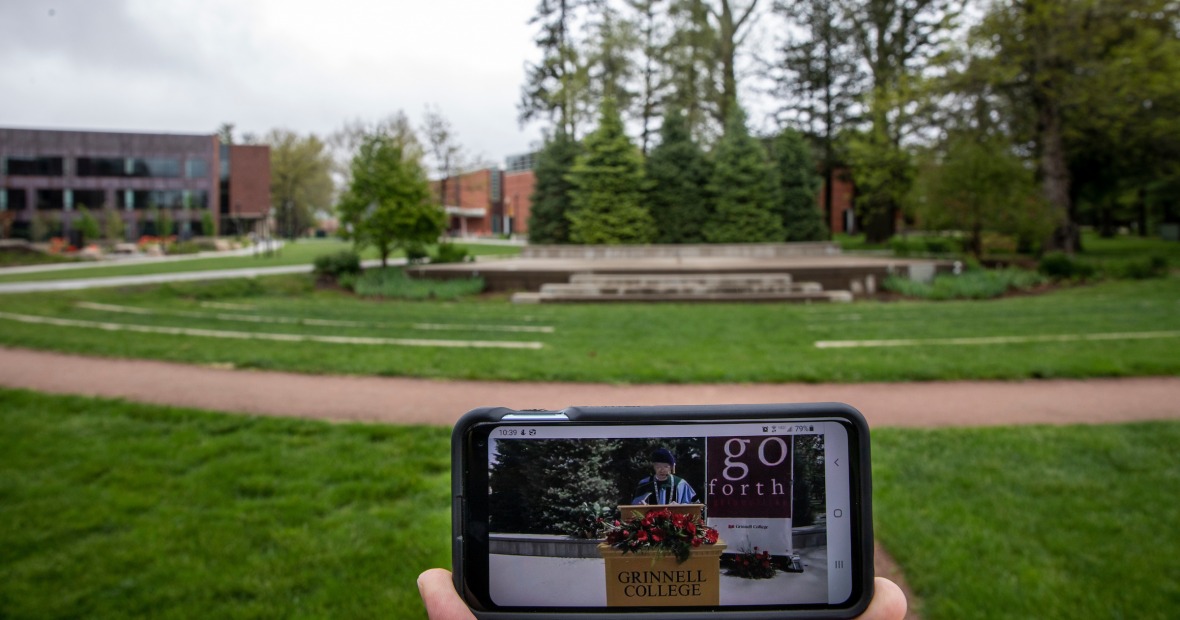 On Monday, May 18, Grinnell College’s Commencement ceremony began just a few minutes later than its scheduled start time of 10 a.m. CDT. The brief delay made Jenelle Veit, coordinator of commencement and conferences, a tad nervous, but then at 10:06 the video began to play and Grinnell’s first virtual commencement had begun. About 2,500 people tuned in.

The event came together in just a few weeks. “We wanted it to feel as much like a normal commencement as possible,” Veit says.

The most important piece to preserve was the reading of students’ names, says Rachel Bly ’93, director of conference operations. Veit agrees.

Names were read, as they traditionally are, by a faculty member from each academic division — humanities, sciences, and social studies. They included Yvette Aparicio, professor of Spanish; Vida Praitis, professor of biology; and Karla Erickson, professor of sociology. Anne Harris, dean of the College, read the names of graduates with interdivisional and independent majors.

Students were invited to submit a photo or video and a short message that was included on the screen while their names were read.

Commencement also traditionally includes several guest speakers. “We wanted to have some sort of speaker,” Bly says, “but at the beginning we had no idea what that looked like.”

In the end, guest speakers weren’t exactly guests. They were two faculty members — Jeffrey Blanchard, associate professor of mathematics and statistics, and Sharon Quinsaat, assistant professor of sociology — and two members of the graduating class — Yolanda Martin ’20 and Anshul Tambay ’20.

The Class of 2020’s commencement committee had nominated all four to speak at Baccalaureate. Since Baccalaureate was also cancelled, inviting them to record their speeches for Commencement instead seemed like the thing to do.

All speeches had to be recorded by early May for the vendor, StageClip, to have time to put all the pieces together.

“We set up the stage like a mini commencement stage with a podium and flowers,” Bly says, “and then scheduled all our speakers to each come, one by one, and do their part.” Except for the student speakers, who recorded their pieces at home and sent them in.

Graduation Celebration in a Box

To help the students celebrate this together-yet-apart commencement, Veit suggested sending graduation boxes to each of the 372 graduates. “I felt like they needed something in hand,” she says.

Each box included a hat, a tassel, a mini program, and a bound copy of author Toni Morrison’s Nobel Laureate speech, which Kington referenced in his charge to the graduates. The College’s catering staff also included a mini dry cake mix that can be made in a mug and a frosting medallion that said, “Congratulations, Class of 2020.”

Veit and Bly personalized the boxes by including the appropriate cord and stole for each student to recognize their achievements and mailed them a week and a half before commencement.