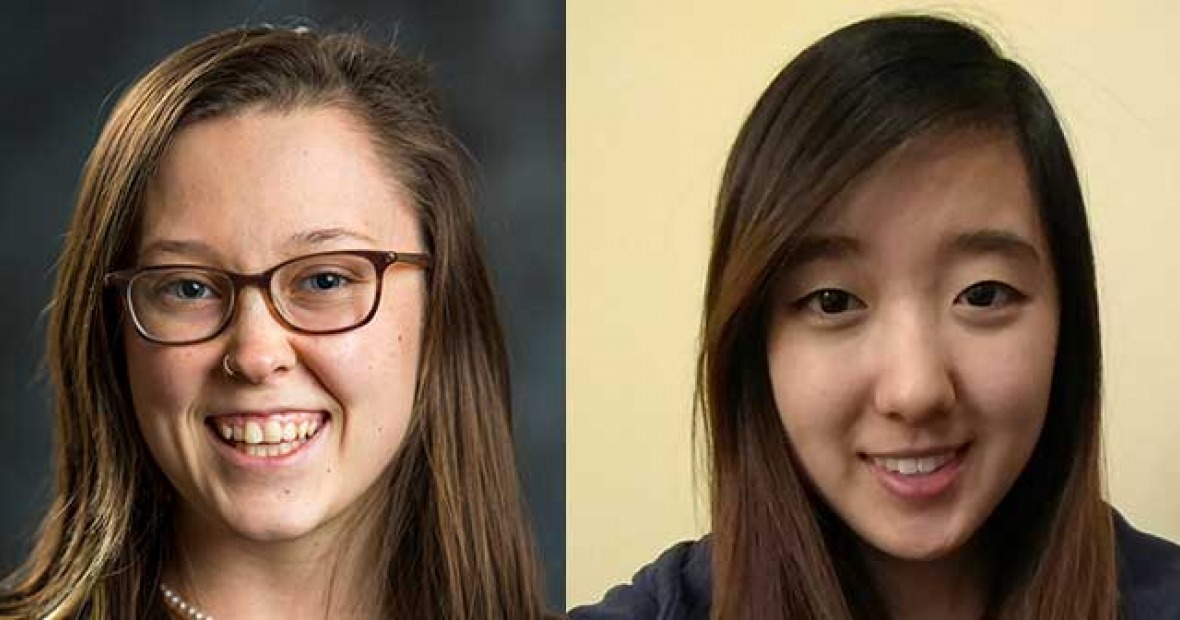 Hwang and Howe are among approximately 550 U.S. undergraduate and graduate students selected for 2017 Critical Language Scholarships through a highly competitive selection process. The scholarships expand the number of Americans studying and mastering 14 languages critical to America's engagement with the world.

Hwang, from Plymouth, Minnesota, is majoring in psychology with an East Asian studies concentration. She plans to become a counseling psychologist serving either East Asian immigrants in the United States or expatriates living in South Korea.

"I have been studying Korean, Chinese, and Japanese at Grinnell so that I will be able to reach a broad number of patients in the future," she says. "I also want to conduct research on mental health differences that are related to East Asians and East Asian immigrants.

"While there is a full-fledged Chinese and Japanese program at Grinnell that I have greatly benefited from, there is little opportunity to study more than introductory levels of Korean," she adds. "I am happy I will be studying Korean in Gwangju, South Korea, this summer because it will bring me another step closer to my career pursuits."

Hwang is a leader on campus, serving as a class mentor and student researcher in the Department of Psychology, vice president of the Korean Cultural Experience, and coordinator of the Japanese Floor and the Chinese House. In March, she won the Japan American Society of Chicago Award at the 31st annual Japanese Speech Contest sponsored by the Consulate General of Japan in Chicago. She is also a Trustee Honors Scholar, the recipient of a scholarship from the Ladies Education Society, and a member of the Psi Chi Honors Society.

Howe Hopes To Use Swahili in Global Health Settings

Howe, of New Plymouth, Idaho, received her bachelor's degree in general science-chemistry from Grinnell last December and is finishing a second bachelor's degree in anthropology at Boise State University. She has been volunteering two days a week at the International Rescue Committee in Boise. Following her immersion experience this summer, Howe intends to pursue a dual Medical Doctor and Master of Public Health degree with an emphasis on rural health.

"I chose Grinnell College," she adds, "because of its opportunities for interdisciplinary exploration, local-global emphasis, and social justice spirit. This opportunity, combined with my current trajectory, feels like the perfect capstone to my time there."

Howe began learning Swahili when she studied abroad in Tanzania in 2014. Upon returning to Grinnell, she continued studying Swahili through the College's Alternative Language Study Option. Howe further developed her language skills in Tanzania last summer as an intern for a small, local NGO engaged in educational programs, thanks to a grant from Grinnell's Rosenfield Program in Public Affairs, International Relations and Human Rights.

"I now have a basic understanding of Swahili," she says, "and I am really excited to be going back to Tanzania to deepen my understanding of the language and to improve my communication skills. Overall, this is a great opportunity that I hope will open doors for me at the State Department and in global health settings."

At Grinnell, Howe was involved in disability and accessibility activism and peer support networks. She was an organic chemistry mentor, a student adviser, a peer educator for the active bystander curriculum, and an active member of the Center for Religion, Spirituality and Social Justice community. Howe also has been a coach with Idaho Special Olympics since high school and is now coaching students for track and floor hockey at COSSA Regional Technology and Education Center, a consortium center for five rural school districts.