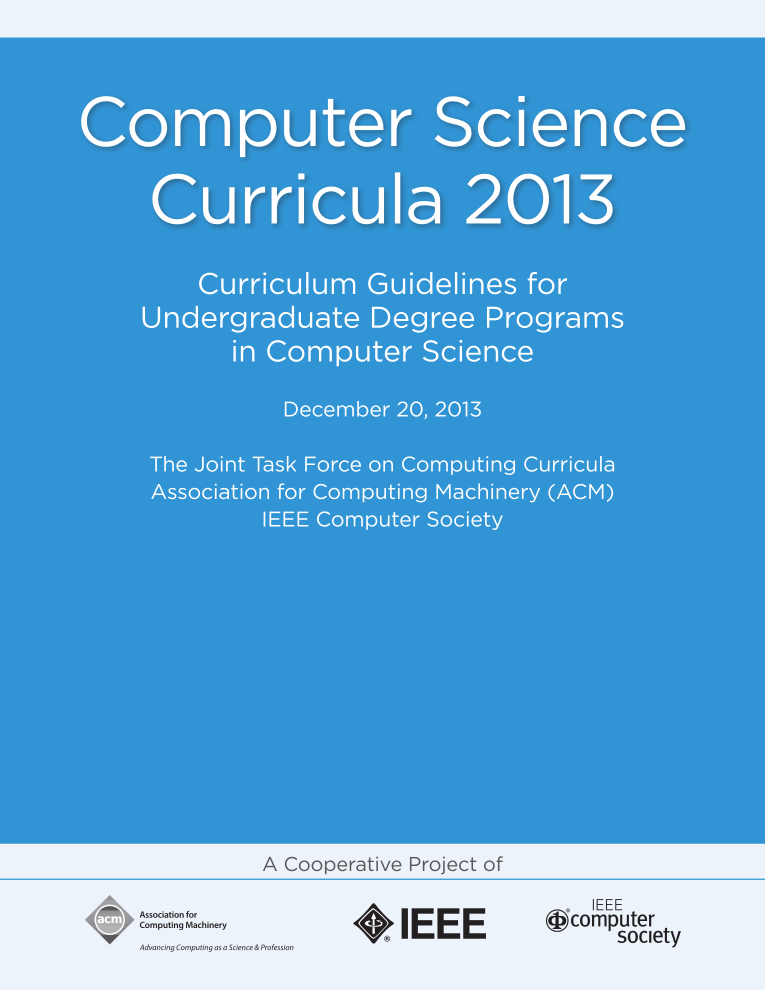 Every 10-12 years, the international professional societies for computing publish extensive recommendations regarding undergraduate programs in computer science. The most recent recommendations, Computer Science Curricula 2013 (CS2013), were published December 20, 2013, by a joint task force of the Association for Computing Machinery (ACM) and the Computer Society of the Institute for Electrical and Electronics Engineers (IEEE-CS). The Final Report of the Task Force recognizes the computer science program at Grinnell in several ways:

Through the development of CS2013, Grinnell's computer science faculty was in regular communication with the ACM/IEEE-CS Task Force. After discussions about Grinnell's introductory, three-course, multi-paradigm sequence, Grinnell's computing science faculty were included on a panel discussing "Course Exemplars" at an international conference in March 2013 (SIGCSE 2013). Grinnell's faculty also will be included on a panel discussing "Curricular Exemplars" at a forthcoming conference in March 2014 (SIGCSE 2014).

Grinnell faculty member Henry M. Walker observed that Grinnell's inclusion in the list of "Curricular Exemplars" is particularly satisfying. CS2013 identifies curricula from only five schools as exemplars illustrating how desired topics and student outcomes might be combined into an overall framework. Two of those "Curricular Exemplars" focus on programs at two-year colleges. The remaining three are Stanford University, Williams College, and Grinnell College.

Grinnell's computer science faculty examine the curriculum on a regular basis — at least every 3-4 years. As part of this review, the faculty discuss its own experiences, feedback from alumni, insights from exit interviews with graduating majors, and discussions on the national/international scene. As part of this process, Grinnell's faculty composed several iterations of updated computer science curricula. A proposed version from near the end of the revision process appears in CS2013. Subsequently, a modest update has been approved and is slated to take effect for the 2014-2015 academic year. The approved version allows somewhat more flexibility in the basic major than the version that appears in CS2013, but all courses listed in the CS2013 version will be available to students interested specific professional careers.