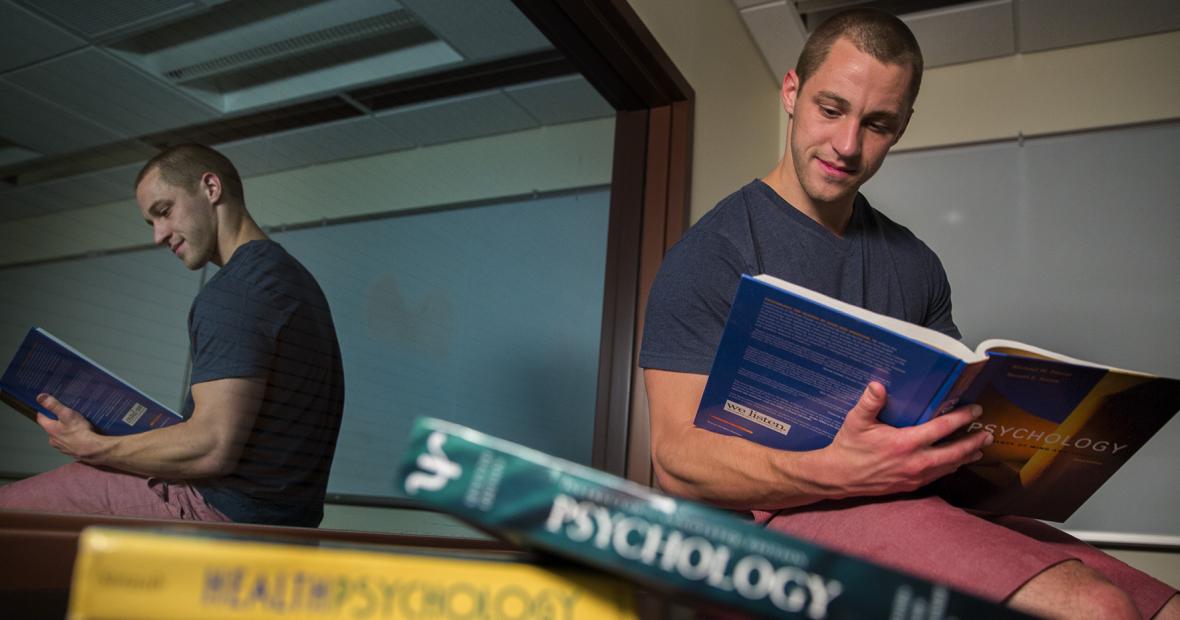 Less than a year after graduating, Seth Gustafson ’14 was invited back to Grinnell’s campus to share his experiences with Professor Emeritus Doug Caulkins’ Creative Careers class. Gustafson was one of two 2014 graduates brought back to share their experiences and advice on finding a first job after college.

Gustafson works at The Pavilion Behavioral Health System, a mental health hospital in central Illinois, and does research in cognitive psychology at the Beckman Institute for Science and Technology at the University of Illinois.

Gustafson provides therapeutic services to adolescents and adults through individual and group therapy sessions and acts as a first respondent to crises at the hospital. “At Grinnell you don’t just memorize the textbook and spit that information back,” he says. “I use my writing and critical thinking skills every day in my job.”

A regular part of his job is therapeutic crisis intervention in response to the sometimes violent outbursts of the residents. “They’re behaviorally challenged kids with mental illnesses in a residential program,” he says. “A lot of times, they gang up on either the staff or other kids. You need to think on your feet to do the best thing in a given situation.”

Gustafson learned a lot from running his first group therapy session. “You have to build rapport, and if they don’t respect you, they won’t listen,” he says. At the same time, he says, you have to establish boundaries.

In addition to his work at The Pavilion, Gustafson also does research at the University of Illinois. He has been involved in two projects there, both using virtual reality. The first studied the effect of urban versus rural settings on creativity. The second was to examine perception and reaction times of older adults crossing the street.

Getting the most out of Grinnell

Gustafson spoke about the importance of taking advantage of internship opportunities and Mentored Advanced Projects (MAPs). “It’s important to build experience before you get out,” he says. Gustafson attributes both his MAP and a summer internship with helping him secure his job after graduation. He took an unpaid internship at Rosecrance, a mental health/substance abuse counseling agency in Rockford, Ill., during the summer of his third year. Thanks to funding from the College, Gustafson was able to complete the internship without having to dig into his own pockets.

In addition to MAPs and internships, Gustafson encouraged current students to make use of the resources available to them on campus — specifically the Center for Careers, Life, and Service (CLS) and the Writing Lab. “The CLS would help me with my resume and cover letter. Then I’d go to writing lab and they’d help adjust the language,” he says. “That’s what got me my interviews.”