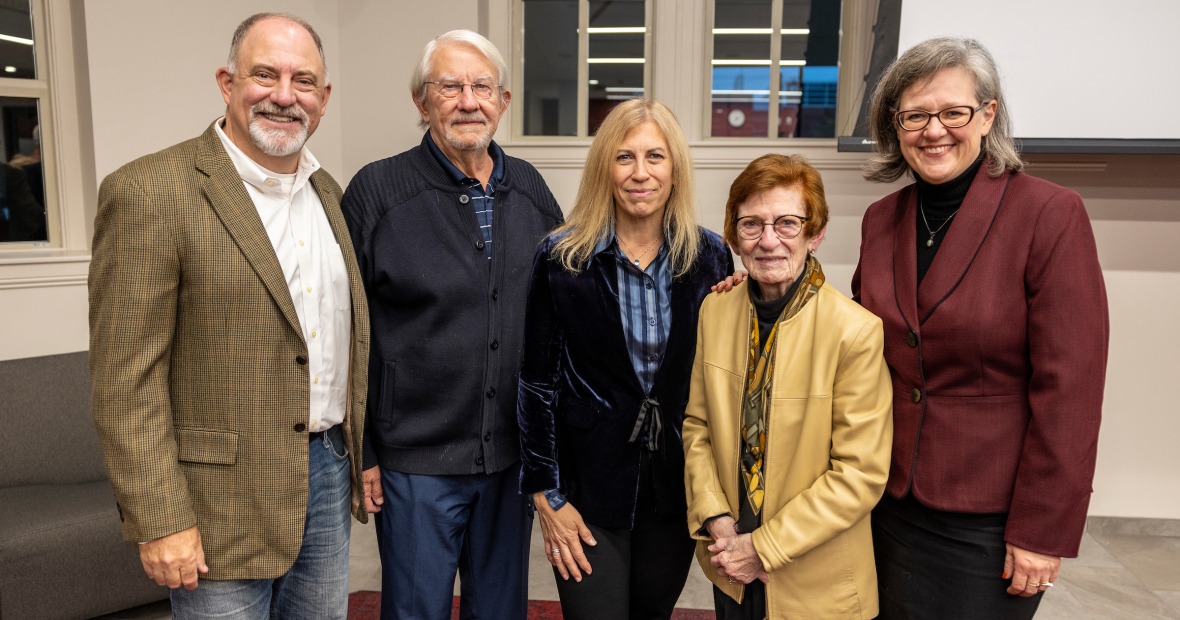 Nancy Schmulbach Maly, second from right, is joined by her husband Allan Maly; her son, Layne Maly; her daughter, Alix Maly Marsters; and President Anne F. Harris for a group photo Friday after the award announcement.

The Nancy Schmulbach Maly ’61 International Student Leadership Award will be presented in the future to international students or U.S. global nomad students [U.S. citizens who largely grew up overseas] for their leadership and community engagement both on campus and in the broader Grinnell community.

The award was announced during a Grinnell College Alumni Council event Friday, November 4, 2022 at the Humanities and Social Studies Center (HSSC) on campus much to the surprise of Maly. She had been invited to attend a presentation about international student affairs. However, the presentation was about her instead. Several of her extended family members and former host family students came into the room to surprise her while others joined the event virtually.

“When I look around the room I see family, dear friends, and our former students, I am totally blown away by this honor,” Maly said. “I can’t begin to tell you how delighted, honored, and humbled I feel right now. You are people who I know and love. I do what I do because of that. If I made a difference in your lives, then all I can say is I’m so happy about that.”

“International student admission and affairs at Grinnell College is inextricably linked to Nancy’s dedication, forethought, and creativity,” Edwards says. “This award commemorates Nancy’s pioneering work, and it will lift up student leaders from around the world for years to come.”

Jayn Bailey Chaney ’05, director of alumni and donor relations, met with Maly family members (minus Nancy) to pitch the idea of collaborating to develop the award and begin fundraising efforts. At last count, 25 donors made gifts and pledges to the award fund.

Grinnell College faculty and staff will nominate third-year international or U.S. global nomad students for the award. The Office of International Student Affairs will select the recipients. Students receiving the award will be given a $1,000 cash prize and have their name added to a plaque on display in the HSSC.

An Iowa native, Maly’s first experience with international students came during a summer student exchange program in Germany with the American Field Service. She majored in French at Grinnell, graduating in 1961. About 15 years later, she took a job running a new East Coast admission office for Grinnell College. Living in New Jersey with her husband Allan, Maly managed student recruitment in New England and the Mid-Atlantic states.

“While today there is a massive and diverse industry behind the recruitment of international college students, Nancy’s early tours were the first of their kind and brought the Grinnell name and reputation to a global audience,” Edwards says.

Because of her leadership and reputation in the field, in 1995 Maly was hired as director of the Council of International School’s Office of Higher Education. She later returned to Grinnell to serve as interim director of admission from 2007 to 2009 before retiring. She has also served on the Alumni Council (including a year as president), remains a class agent for the class of 1961, and has volunteered in numerous other roles for the College.

“It’s not possible to thank you enough for everything you have done for me,” says Neil Israni ’22 in a video of tributes that poured in from Maly’s host family students and work colleagues.

“I think it’s so great that Grinnell has an individual like you that is so altruistic and caring and that really makes this community shine. This award really stands for what you believe in and what you strive for.”