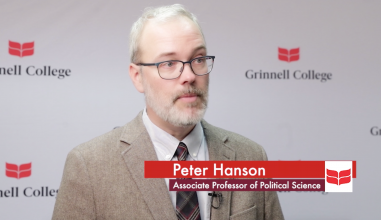 More than half of U.S. residents say their feelings towards President Donald Trump have become “more unfavorable” since he took office according to the newest edition of the Grinnell College National Poll, released Oct. 29, 2019. The poll, a partnership between Grinnell College and nationally renowned pollster J. Ann Selzer of Selzer & Company, showed that 56% felt more negatively about Trump, compared to 39% that feel more favorable about him since January 2017.

The Grinnell College National Poll (Grinnell-Selzer) shows that Trump’s job approval rating has fallen three points to 40% since November 2018. It also shows that if the 2020 general election were held this week, only 38% of likely voters say they would definitely vote to re-elect President Trump, while 47% of likely voters would definitely vote for someone other than the president. 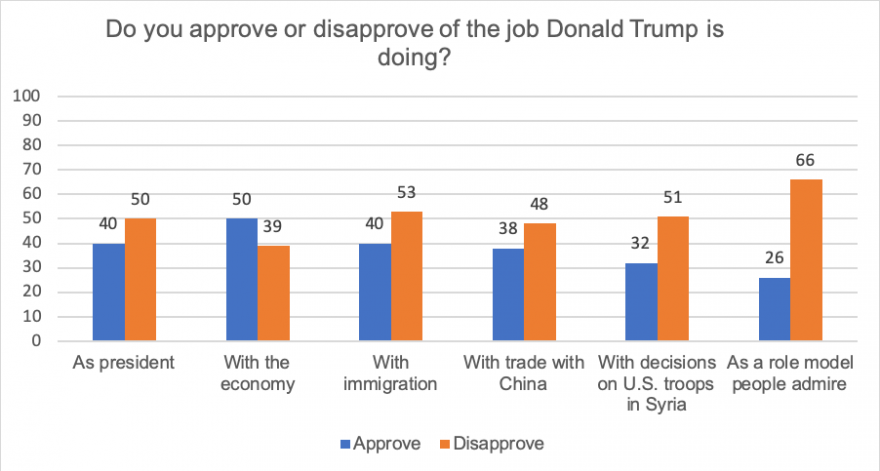 50% of the respondents approve of the job Trump is doing with regards to the economy, compared to 39% who disapprove. But those numbers are not translating to sure votes in 2020.

“Historically, presidents who govern during times of economic growth are likely to be re-elected,” said Peter Hanson, associate professor of political science at Grinnell College and Grinnell College national poll director. “Over half of Americans believe the economy is doing well and that they are moving closer to their personal financial goals, but just 38% think President Trump should be re-elected. The warning lights should be blinking red inside the Trump campaign. The president is heading into 2020 weighed down by troubles that are overshadowing the strong economy.”

An Overwhelming Majority Are Against Foreign Interference

81% of Americans say it is not okay for political candidates in this country to ask for assistance from a foreign government to help them win an election. This number includes large portions of the president’s base of support in 2016 — Republicans (81%), evangelicals (85%), and rural dwellers (87%). While these numbers are striking in size, reactions to what should happen next largely fall along party lines.

“When it comes to foreign interference, having findings this close to a consensus are rare in polling these days,” Ann Selzer commented. “The substance of the question at hand in the impeachment inquiry does not seem in dispute. What’s appropriate in terms of process and consequences are far less clear.”

42% of Americans believe that President Trump should be impeached and removed from office, with the highest percentages coming from Democrats (83%), those who don’t profess a religious preference (62%), and suburban women (57%). Meanwhile, 44% say he should not, led by Republicans (87%), white men with no college degree (74%), and rural dwellers (63%).

“While nearly all Republicans believe that asking for foreign help to win an election is the wrong thing to do, in this case, most don’t believe it rises to the level of an impeachable offense,” Hanson said.

Overall, 48% of Americans agree with the U.S. House of Representatives’ decision to open an impeachment inquiry, while 42% disagree with that decision.

Here are some other findings of interest: