If the election were held today, the newest edition of the Grinnell College National Poll shows Joe Biden winning the popular vote in his quest to become to be the 46th President of the United States. Former Vice President Biden leads President Donald Trump 49-41% according to the poll, which was conducted August 26-30, 2020 as part of a continuing partnership between Grinnell College and nationally renowned polling firm Selzer & Company.

If the general election were held today, for whom would you vote?
(N= 827 likely voters, MoE= ± 3.4 percentage points) 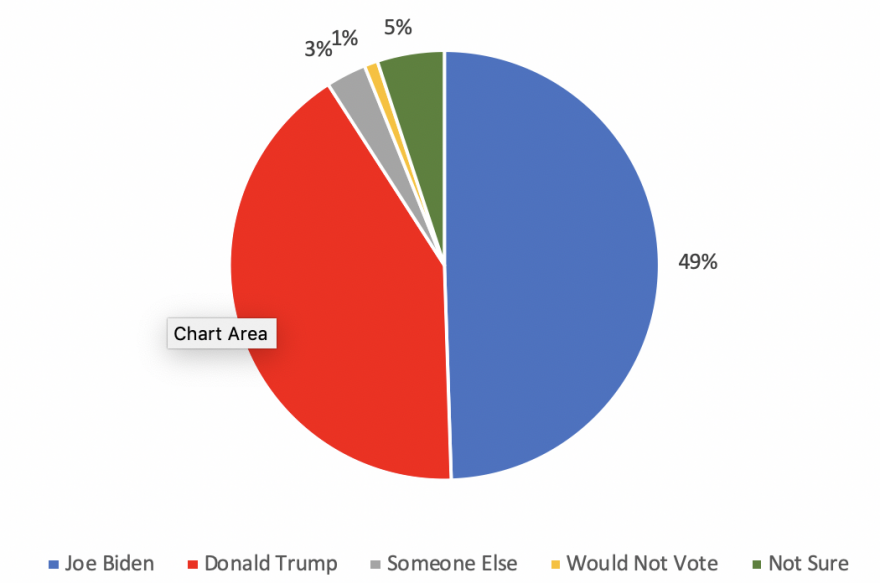 “Beyond the overall eight-point advantage, this poll shows some areas of underlying strength for the former Vice President,” said J. Ann Selzer of Selzer & Company. “Mr. Biden holds a wide lead with moderates 55-33%, who are a plurality of the electorate; he benefits from a 10-point lead among independents who do not lean toward any political party, 44-34%.”

“The president has not expanded his coalition beyond his core base of supporters, who have always been a minority of the electorate,” said Associate Professor of Political Science at Grinnell College and Grinnell College National Poll Director Peter Hanson. “His most likely path to victory is to do again what he did in 2016: win the Electoral College with narrow victories in battleground states despite losing the national popular vote." 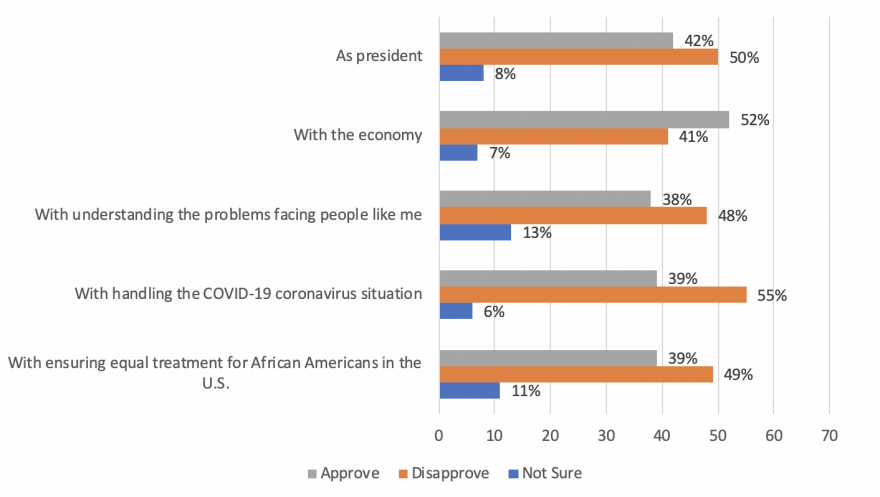 Fewer Americans approve of the job Trump has done as president (42%, a 6-point slide since March) than disapprove (50%). Americans continue to give the president high marks for his handling of the economy – 52% approve.

“With Americans reporting substantial disapproval of the president’s handling of the coronavirus and understanding the problems of ‘people like me,’ the president’s prospects are looking increasingly grim with just two months to go before Election Day,” Hanson said. “His strength continues to be the positive evaluations he receives for his handling of the economy.”

One third of Americans have doubts that the votes cast in November will be counted as intended according to the poll. 34% say they’re not too confident or not at all confident in the results, up from 28% in March.

How confident are you that, across the country, the votes in the 2020 presidential election will be counted as voters intended?
(N=1,012 U.S. adults, MoE= ± 3.1 percentage points)

Concerns about potential voter fraud are highest when it comes to absentee voting – with nearly 4 out of 10 Americans saying mail-in voting is likely to be affected by a substantial amount of fraud. Those feelings are most prevalent among Republicans, with 52% of all Republicans and 57% of Trump supporters expressing concern.

“Over half of Republicans now believe that mail-in ballots are particularly vulnerable to fraud, and the percentage of Republicans who are confident all votes will be counted accurately in November has plunged by nearly 20 points since April,” said Hanson. “The steady drumbeat of attacks from the president on mail-in voting appear to be taking their toll.”