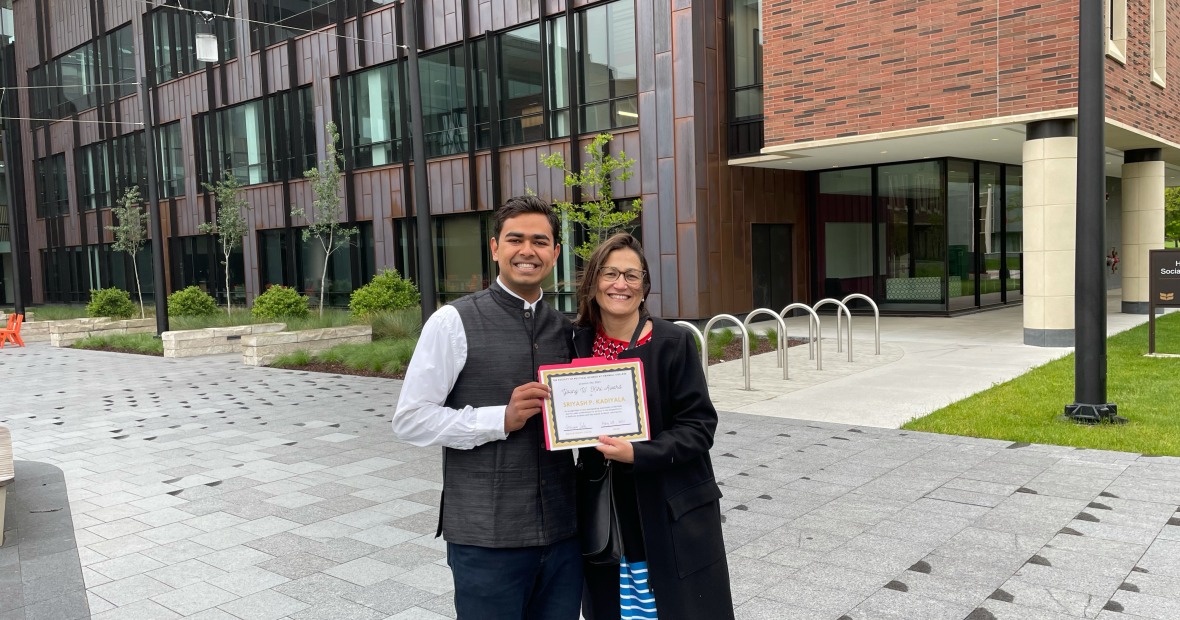 The Grinnell College Department of Political Science faculty has named Sriyash Prajval Kadiyala ’21 the recipient of the 2021 Young W. Kihl ’59 Political Science Prize. Kadiyala received a certificate and honorarium the day of Commencement, which was held on Friday, May 28, 2021.

The Kihl Prize is an annual, competitive award that honors an outstanding senior political science student who has:

Kadiyala was a member of the Student Educational Policy Committee (SEPC) for the political science major, serving from 2019–21. In this capacity, he assisted in departmental programming and coordinated student feedback on three faculty hiring searches and one tenure review.

“Sriyash was a leader both inside and outside of the classroom,” explains Professor Peter Hanson, who advised Kadiyala for the political science major. “He was an enormous help to the department hiring new faculty members, and a consistently thoughtful voice in classroom discussions… [he] was a pleasure to work with.”

Kadiyala, who made Dean’s List every semester since Fall 2019, double majored in political science and economics. He recommends a major in political science to other Grinnellians because it will help them to understand current political events with greater nuance. “The major makes sense of behaviors, whether among elites or the people, that are counterintuitive,” Kadiyala notes. “It’s the most fascinating aspect of Poli Sci courses at Grinnell.”

While Kadiyala takes with him many fond lessons, he will “always remember” writing a Supreme Court of the United States (SCOTUS) opinion in Professor Hanson’s Constitutional Law & Politics (POL-219), as well as learning about rent-seeking in Professor Barry Driscoll’s International Political Economy (POL-251) and counter-majoritarianism in Professor Gemma Sala’s Courts and Politics in Comparative Perspective (POL-355).

With this stage of his Grinnell journey complete, Kadiyala will next continue his education at the D’Amore McKim School of Business at Northeastern University in Boston, Mass. There he will pursue a joint degree in accounting (MSA) and business (MBA) and, eventually, a career doing financial work for nonprofits.

The Department of Political Science thanks Kadiyala for the positive impact he has made while a student at Grinnell and wishes him well in his future endeavors.